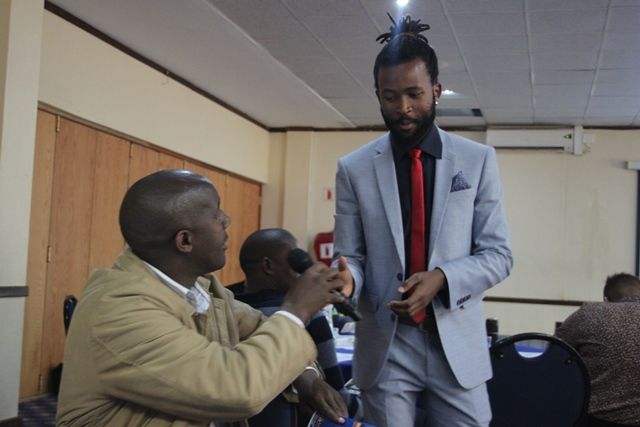 Manzini, 6 December: Sex workers and members of the Lesbians Gays Bisexual Transsexual and Intersex  (LGBTI) community in the country have expressed their concern about the lack of respect shown to them because of their sexual orientation in the country.

Members of the key population have now and again tried to engage different stakeholders including churches in a bid to try and sensitize them about their rights to lead happy lives free from violence and discrimination despite of their sexual orientation. However such meetings usually do not have the desired effect.

Earlier this year, on 7 August 2018, a meeting was held between pastors and members of the LGBTI community. During the Religious and Intercultural dialogue, it was clear that the country has a long way in terms of educating its population about the rights of key populations.

During the meeting which was attended by over 20 pastors and I was also part of, pastors made it clear that they cannot allow gay people to ‘flaunt’ their behavior in front of congregants. Pastors said what is being done by LGBTI community  is “demonic” and through prayer maybe can be healed.

Pastors were of the view that what the LGBTI are is something that is against the Bible. The meeting which started off on a good note ended on a sour note as the two parties had a clash of opinions. Senior Pastors in the country did not even bother to attend the dialogue. The discrimination towards key population is not only coming from the ordinary citizens but even legislators are perpetrating the infringement of the rights of the LGBTI community.

Senator Princess Phumelele was quoted by one local publication The Times of Swaziland as having said that she is totally against laws that will legalize abortion and same sex relations as they are against the teachings of the Bible. In response to this Rock of Hope a non-governmental organization which advocates for the rights of LGBTIs in Eswatini, issued a statement through its Communications Officer Melusi Simelane.

The statement said that Rock of Hope noted, with sadness, the comments made by the Honourable Senator, Princess Phumelele with regard to laws relating to LGBTI persons. Simelane said as Rock of Hope they acknowledge the freedom of expression and freedom of speech as enshrined in the Universal Declaration of Human Rights of 1948. He said the senator is entitled to her views and opinions, and they do not find it to be their duty as Rock of Hope to have her exercise them otherwise.

‘We should, however, take this opportunity to emphasize our conviction on the non-constitutionality of the Common Law Offense of Sodomy, and we will continue to work with all three arms of government to ensure that these common law offenses are repealed, so as to represent the rule of law, specifically the Constitution of The Kingdom of Eswatini (2005)’ Simelane stated.

The police are not exempted from these acts. This was seen through former Chief Police Information and Communications Officer Khulani Mamba who made remarks which were not taken lightly by the LGBTI community. Mamba was quoted by The Times of Swaziland as having said that LGBTIs cannot have free reign over Eswatini.

During workshops LGBTI people are always state that there is a lot that needs to be done in terms of sensitizing the nation about the of rights which need to be exercised by every citizen in the country. Rock of Hope has indeed engaged in endless sensitization campaigns. Just this year Rock of Hope partnered with the Ministry of Health and  visited various Health Care centers discussing with nurses topics including the need for health care for all.

Another group among key populations which has limited access to reproductive health rights is sex workers.  This group is also not having it easy as it constantly face discrimination and victimization from all sectors of society. Some sex workers in the country have revealed that they have even been disowned by their families because of what they do.  Sex workers revealed that they cannot access health care facilities because of the treatment they receive whenever they visit health centers.

They say whenever they exercise their right to access health facilities for various reasons including getting medical attention or to access birth control they always encounter stigmatization from hospital staff.

In a recent meeting hosted at The George Hotel in Manzini,  sex workers made it clear that not only are their rights infringed by nurses or hospital staff but they are facing a serious challenge from customers who do not want them to use protection during sexual intercourse.

Statistics presented by National Key Populations and Vulnerable Groups Officer, Khanyisile Lukhele who is from the Swaziland National AIDS Programme (SNAP) at the George Hotel during a Sex Workers National Indaba held on 30 October 2018 revealed that 39.2 per cent of sex workers have claimed to have been raped by uniformed police officers in the country.

These uniformed officers according to sex workers who later delivered testimonies include police officers, members of the Eswatini Umbutfo Defence Force (UEDF) and security personnel patrolling the hotspots where sex work is rife.

Other people who infringe on the rights of sex workers are the customers themselves. Sex workers revealed that they are sometimes raped by their own clients. They said what makes the situation worse is that they cannot even report to the police whenever they are raped or robed by their clients.

Sex workers say police always ask them if what they are doing is legal and then threaten to arrest them for engaging in sex work whenever they come to report cases. Sex workers say another challenge they come across while in the line of duty is clients who refuse to wear protection.  Nomsa* a sex worker who lives at Mathangeni area said while in the line of duty she encounters customers who prefer to have sex without using a condom.

Nomsa said these customers offer to increase the price if they are allowed not to use a condom. She said because she needs money she is tempted to give in to the request of her customers. She said as a sex worker she tries to be always careful as she carries a condom with her all the time.

Nomsa said she does not allow customers to come with their own condom because sometimes customers make tiny holes at the tip of the condoms. Nomsa said being a sex worker, it is not easy to get access to health services nor is it easy to get  family planning services. Once they reveal that they are sex workers at the clinic, they are ridiculed. She said it is worse when one goes to get treatment for any sexually transmitted disease.

A place popularly known as kaDups near Boxer supermarket in Manzini town has turned into a hotspot for sex workers. This is because the place is known for the people plying their trade in traditional medicines and they claim that their muti heals all ailments (zifozonke) as it is popularly known in vernacular.

Nomsa said at the market it is much better than the clinic because they are not grilled that much but simply state their sickness and are given a concoction known as an Imbita in Siswati.

Sifiso Nhlabatsi is a journalist from Swaziland. This article is part of the 16 Days News Service #VoiceandChoiceCampaign

Photo by Sifiso Nhlabatsi: Rock of Hope Communications Officer Melusi Simelane (standing) handing over the microphone to Reverend Jabulane Yende of Faith in Christ Church during the dialogue