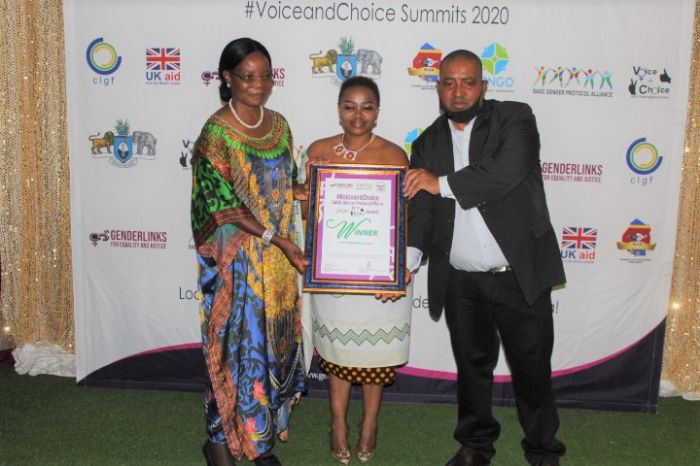 Mbabane, 2 November 2020: The Eswatini  #VoiceandChoice Summit ended on a high note with the launch of the Women in Local Economic Development (WLED)  Gwacatela Ntsika network.

The British High Commissioner His Excellency John Lindfield officially launched the WLED network at the Summit which was opened by the Minister of Housing and Urban Development (MHUD) Honourable Prince Simelane.

He noted how poverty cannot be addressed without gender equality and the empowerment of all girls and women. When half the population is unable to achieve their potential, when they are prevented from being productive, or when their voices are simply not heard, there can be no sustainable path to development, peace and prosperity.

Global evidence demonstrates that higher levels of gender equality are associated with gains in income, economic growth and competitiveness. Gender equality is a basic human right. It brings benefits to human development and wellbeing for individuals, families and societies. Empowering women and girls improves peace and stability, and it is good for business.

Promoting gender equality is about shaping a shared future. It creates opportunities for girls and women worldwide to be safe and to enjoy their rights, to contribute to their country’s growth and economy, and to shape their community and their country’s future.

In his keynote speech Prince Simelane noted that the Ministry seeks strong municipal structures that will ensure sustained contributions towards the achievements of government objectives as enshrined in the national development strategy, including the realisation of national poverty eradication.  He said this is the reason he appreciates the partnership between Eswatini Gender Links and Eswatini Local Government Association, which has seen the two institutions working together in the Centres of Excellence programme where Local Authorities develop and implement gender policies. He thanked the British government, on behalf of His Majesty , for this funding that is aimed at fighting urban poverty.

He highlighted that in the upcoming elections (2022) the country needs more women to be elected as councillors, or holding managerial positions in the Urban Local Governments. He further noted that there are only 14 women councillors and only three women Town Clerks in the country which is not a good indication of the role played by women in society.

The summit brought together a total of 66 participants including 5 local government practitioners (47 female; 18 male and 1 other) comprising of Ministry of Local Government officials, Chief Executive Officers, Town Clerks, Gender Focal Persons, Gender Champions from all the 13 councils as well as participants from Civil Society, FBO, and CBOs from the four regions of Eswatini.  Out of the 13 Centres of Excellence (COE) councils on 6 local authorities showcased their institutional best practices and one (1) winner and a runner-up emerged.

Speaking at the awards ceremony Fikile Mkhonta who served on the judges team said “As participants you are all winners. This was not a competition but you were sharing and most of us learnt a lot from your presentations, prepare yourself for next coming summit in 2021, to the winners I say go to the regional summit and lift Eswatini flag high Judge in the SRHR category”

Nokuthula Mamba from the Eswatini Young Women Alliance, noted that, “The summit  opened me up to so many gender mainstreaming projects that promote gender equality, there is so much that we can learn. So many young people participated both males and females. And it was gender balanced. There were very good presentations. Many people felt like they need more platforms like this.”

The main purpose of the #VoiceandChoice Summit was to allow participants to learn and share best practices from various sectors across the country including Government departments, Non-Governmental organisation (NGOs), Community Based Organisations (CBOs), Faith Based Organisations (FBOs), Local Government councils as well as the media. Case studies were shared in different streams including Action, Youth, Media, Entrepreneurship as well as Centres of Excellence Institutional Awards.

The summits also provide an important checkpoint to evaluate the implementation of the campaigns and action plans at national and local level.

On the last day of the summit all women from the three networks were given an opportunity to share their “I” stories which took almost five hours.

The Voice and choice closed with a call for action for all participants to continue learning and sharing their best practices.