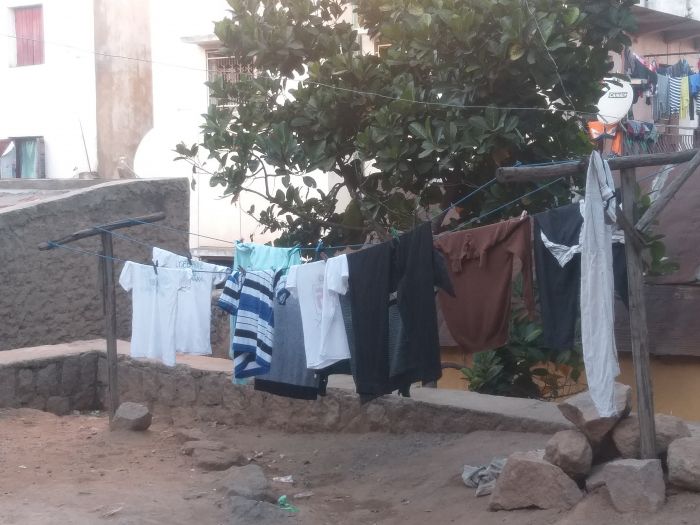 Antananarivo, 5  May: The state emergency was declared on March 19, 2020 followed by a period of confinement of 15 days for two regions, after the announcement of the of the three imported cases of corona virus.

With the majority of the Malagasy population being poor, several families are experiencing great difficulty during these days of confinement. At the height of the lockdown buses and other forms of public transport were forbidden from operating, schools were closed, only one person per household could go out to shop, only vendors of basic necessities could open.  Those who to work they have to go on foot. No one was allowed to go out after twelve o’clock. As a result, several workers in small and medium-sized enterprises were being working shorter hours and or laid off. Others were not paid during the days of confinement.

Although in the main streets and in the city, the lock down measures seemed to be respected, this is not the case in the many neighbourhoods. The social distance of one metre and the wearing of masks is  not respected. Not to mention the lack of hand washing facilities. In the local markets, speculators take advantage of the situation to raise the prices of basic necessities. Mothers are victims of stress and anxiety about the survival and health of their families.

In Lalao, a widow in her late sixties is forced to take over the laundry of the more or less well-off families in the neighbourhood, an activity she has been doing for about four years. She lives with her son and eldest daughter, both divorced and forced to stop their work during this period of confinement, as well as her grandchildren. Every morning, she knocks on a family’s door to look for laundry to be done and takes on a few weekly contracts. “We can’t all stay at home with nothing to do and nothing to eat. We don’t have the possibility to stock up for several days. I’m sure it’s not just our family that’s going through this right now. If we don’t do anything, it’s not the coronavirus that will kill us but it will be hunger.  I haven’t worked for a few years now, but I can’t just sit idle . We have to risk it. I’m used to doing laundry, it’s no problem for me to do people’s laundry. My kids help me pick up the laundry and deliver it the next day. Sometimes I ask my daughter to come with me to help me,” she says before reaching the pond with a water point that serves as her office.

Although Lalao wanted to share her story and how she lives in this time of confinement, she did not want her face to be shown. With her daily earnings of about 5,000 to 8,000 Ariary, or about two US dollars, she takes care of the meals for two days: “We rarely eat meat and fruit, we are content with vegetables, and dry seeds such as beans Since my son and daughter, both sales persons, cannot work at the moment. We have a stock of rice at home so we only buy the food we need. We can’t make snacks every day but we do our best to make sure the children get a snack three times a week. I cook cassava or maize or sweet potato. Sometimes I make them doughnuts. Luckily for us we don’t pay rent, otherwise I don’t know what would have happened. ”

To protect herself from the virus, Lalao tells her grandchildren to stay close to the yard. They put a bucket of water and soap in front of the door to wash their hands before coming home. “We also do an inhalation every other day with medicinal plants. We’ve had this habit for years to treat flu or fever or to avoid getting sick.”

Faced with the socio-economic difficulties of the majority of the population, the Malagasy government has set up a safety nets for the most disadvantaged. Food containing rice, oil, dry seeds and sugar has been distributed. The elderly are the priority recipients of these donations. However, Lalao, despite the fact that she is over sixty years old, has received nothing. She fears a diversion of the distribution of these food stuffs at the neighbourhood level. This has led to frustration at the neighbourhood level. We decided to see Mr. Marcellin, the president of the neighbourhood in his home to ask why some people get the food and others do not.

Fehizoro Rafalimanana is from Madagascar. The story is part of the GL News Service, Gender and COVID 19 news series