News Feminism’s got its groove back... 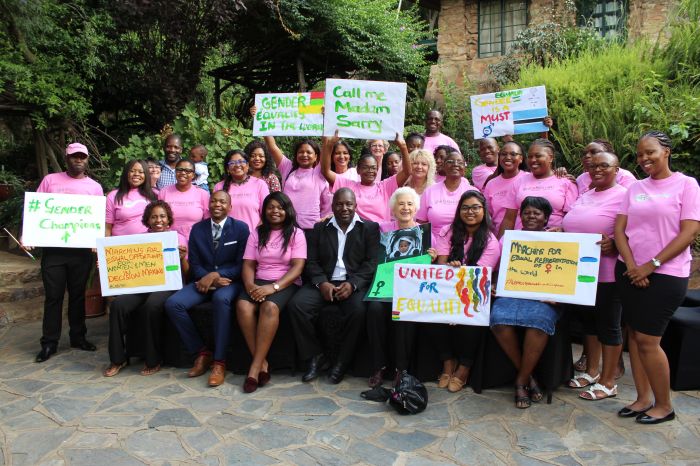 Feminism’s got its groove back

Johannesburg, 19 January 2018: Every dark cloud truly has a silver lining. January 20 last year witnessed the inauguration of Donald Trump, the most overtly racist and sexist US president in recent history. That sparked off the biggest women’s march ever a day later: over 400 marches across the USA and 168 in capitals around the world including in Johannesburg and Cape Town. This year opens with a barrage of criticism of Trumps first year in office, including his racist remarks in a meeting with a bipartisan group of senators at the Whitehouse. But the year also opened with speculation that Oprah Winfrey might become the first black woman president of the US in 2020 after her riveting speech at the Golden Globe Awards urging women and girls around the world to seize the moment.

Sad as it may be, it took the stream of sexual harassment allegations against businessman-turned-presidential candidate Trump to blow the lid off the silence that surrounds the daily abuse of women’s bodies.

In his brazen style, Trump denied all the allegations; waged an open war on women’s bodies by expanding the global gag rule banning foreign Non Governmental Organisation that receive certain kinds of American aid from counselling on, referring for, or even advocating for abortion, and supporting Roy Moore in his bid for the governorship of Alabama despite a slew of sexual harassment accusations. Moore’s loss to Doug Jones, the first time in decades that the state went to the Democrats, signified just how politicised the issue of women’s rights has become in the world’s richest democracy.

Adding grist to the Women’s March are the dozens of women movie stars, led by Ashley Judd, who have plucked up the courage to speak out against the shameful sexist behaviour of Hollywood mogul Harvey Weinstein and a long line of well- known stars like Kevin Spacey, leading to their fall. In this age of social media it only takes a spark to get a fire going. The #MeToo campaign amplified the voices of many lesser known women; spilling over to countries like the UK where other political heads rolled; sparking the #Times Up  campaign; and taking new forms, such as the demand by senior women in the BBC for equal pay.  Breaking with the usual tradition of its Person (usually man) of the Year in 2017, Time Magazine named the “Silence Breakers” as the Persons of the Year.

Dressed with all her women colleagues in dazzling black, with stars like Meryl Streep and Billy Jean King (of Battle of the Sexes Fame) cheering on, it was left to Oprah to give it all meaning. “It’s not just a story affecting the entertainment industry,” she declared in a far more presidential voice than Trump (despite his decade in TV as the anchor of The Apprentice) could ever muster. “It’s one that transcends any culture, geography, race, religion, politics, or workplace. So I want tonight to express gratitude to all the women who have endured years of abuse and assault because they, like my mother, had children to feed and bills to pay and dreams to pursue. They’re the women whose names we’ll never know.”

According to Vivienne Mayer, a spokeswoman for the Women’s March Global, the march has inspired many efforts across the globe “from the network of local grassroots teams that have formed to enforce the child marriage ban in Malawi, to combating female genital mutilation in Ghana and fight for women to walk the streets safely in India. In Frankfurt, Germany, the Women’s March organisers have developed eight pillars of resistance, including rapid-response actions.”

In South Africa, the murder of Karabo Mokwena by her partner, also much amplified by social media, gave rise to the black dresses and red lipstick “count me in” campaign; the #MenAreTrash debate, and #NotInMyNname response by progressive men. Deputy Minister of Higher Education Mduduzi Manana resigned and was convicted of beating three young women in a club on a Saturday night discussing the state-of-the-nation. He remerged as a member of the ruling African Nation Congress National Executive Committee as the year closed.

Clearly the struggle is far from over. But as Oprah Winfrey put it:  “For too long, women have not been heard or believed if they dare speak the truth to the power of (abusive) men. But their time is up. Their time is up.”  Welcome to 2018, and to a world in which women and girls finally exercise voice, choice and control over their bodies!

(The authors work for Gender Links, a Southern African NGO that promotes gender equality and justice).This article first appeared in the Mail and Guardian

Comment on Feminism’s got its groove back Cancel reply