News Gender Based Violence at Home... 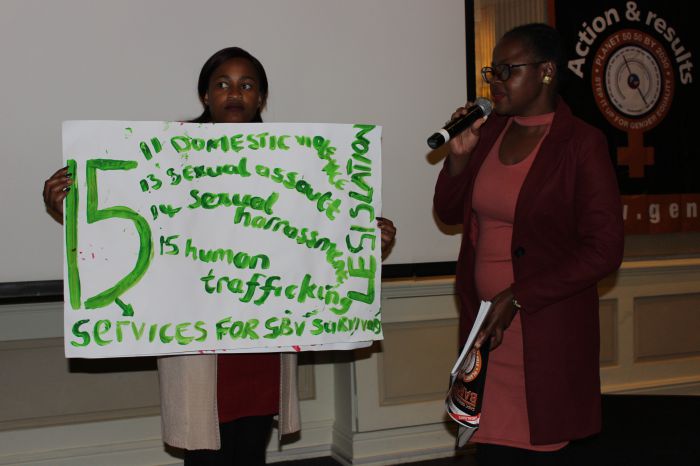 Gender Based Violence at Home

“A rapist does not have to be a stranger, someone you never saw or a man with obvious problems to be legitimate. If you have been in public with him, danced one dance, kissed him goodbye lightly with a closed mouth, pressing charges will be as hard as keeping your legs closed while five fools try and run a train on you. These men, friends of ours, who smile nicely, take you out to dinner, then lock the door behind you.

These lines from the movie, ‘For Coloured Girls’ shed some light on the horrific nature of intimate sexual violence. Women across the region continue to suffer violence at the hands of their intimate partners because of some cultural practices that discourage women to speak out about intimate issues in public.

In Shona, there is a saying which says ‘Mukadzi mukuru haamire pachuru’ which when translated into English means an adult woman does not herald her marital problems. This is further compacted by religious messages that reinforce that a man is the head of the household and a woman must submit to his authority.

Such prejudiced attitudes make it difficult for women and young children to report a known offender.  It is therefore very important to denounce cultural norms that support and exonerate men who abuse their wives.

As part of my community work, I have come across at least one case in each area I have worked in of a child that has been abused by a known perpetrator. In at least sixty of the cases, the perpetrator was not handed over to the law but families reached agreements of how to handle the ‘situation’. This leaves the child to live in the same community as the perpetrator or worse to be further abused by the same individual in the name of the arrangement made.

This kind of arrangement is a common practice in the Middle East, where men are sometimes   ‘forced’ to marry their victims of rape, a law recently repelled in Jordan. How is it all right to let a child live with their RAPIST? The thought that some form of payment removes the ugliness of sexual abuse needs to be addressed with strong messages from the highest political level.

Research on child sexual abuse shows that a large proportion of child abusers are acquainted with the child being friends with the family, carers or neighbours, 30% are relatives and only 10% are strangers. Hence the need to build the capacity of families to respond to such risks, in a way that protects the best interest of the child cannot be overstated.

The same goes for the women in the same communities who have all affected in some way by gender based violence. In worse cases, some have even lost their lives. Hence my conviction that it is important to empower women so that they are able to recognise what an abusive relationship looks like; when to draw a line between jealousy and emotional manipulation; how to exit a dangerous relationship. This will go a long way in saving lives.

This article is a part of series of voices from the recently launched SADC Gender Protocol Young Women’s Alliance.

One thought on “Gender Based Violence at Home”

Hi, My name is Mary Jack and am from Vanuatu, The article is very important and I want to learn more from this program. I want to know how you can mobilize the young girls and which methodology or tools you use to train women.

Comment on Gender Based Violence at Home Cancel reply