News I story COVID -19 in the streets on Dar es Salaam... 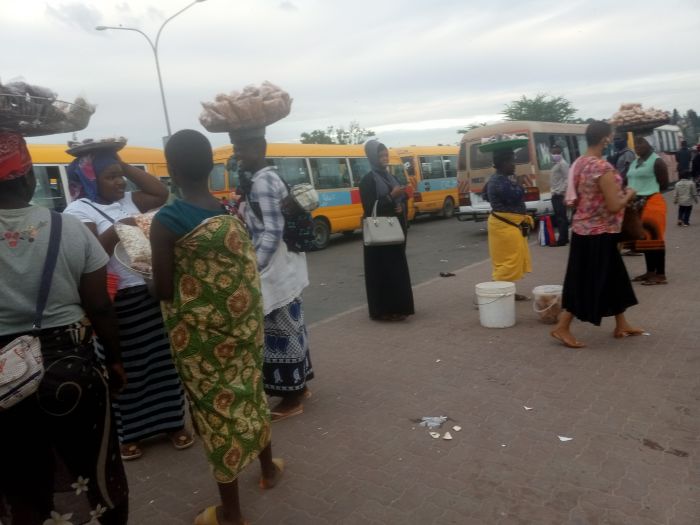 Dar es Salaam, 02 June: One rainy morning, I boarded a bus to go looking for stories on  he outskirts of Dar es Salaam as I usually do. To update myself with what dominates the headlines, I was busy surfing the morning news when a woman with a baby entered the same bus. I squeezed in for her and her child to sit in the bus.

No sooner had she sat in the squeezed seat next to me struggling to get the comfort for nursing her daughter, than the conversation on her safety and that of her daughter on the wake of the viral disease began.

Are you not terrified of the possibility of you and your toddler contracting corona virus infections? I asked her in a puzzled and way.

“It is God who protects me and my children and other people. I have no way out by myself, I must get out working for money if I have to afford bills,” Asha Saidi (25) tells me as we board a bus towards Mbezi commuter bus terminal in the outskirt of Dar es Salaam city.

Even though I roam around the city, mostly in public transport I never consider it to be of importance to consider women and youth whose income depends on daily hawking could endure life hardship amid this deadly disease. So horrendous was the day I learned that the minibus I boarded had a woman with some stuff which indicated that she was transporting them to a place, mostly a roadside with a bigger number of pedestrians to try her fortune.

As a journalist, I had to ask myself on how are petty traders in this coastal city searching for their survival while protecting themselves? How then are they taking care of their little ones while making ends meet at a time when schools are closed down for fear of the virus and if they have in any way reduced their working hours to avoid infections.

At Mbezi bus stop, I decide explore the ways traders, most of whom are youth and women do rush for customers amid embracing protective mechanisms against corona virus.

The little ones do not understand the consequences of being exposed to risky environment. They have no facemasks just like most of the traders here, at their infancy level, they do not know what directives like social distancing means. The children were seen playing in the busy street as their parent seek for customers. Closing schools may even have made life riskier to children whose parents have no formal arrangement to keep the little ones in safe environment.

Asha Saidi gets some time out to rest.  She tells me that even if the Tanzanian government would have opted for a lockdown or curfew as it has been done in other countries to fight spreading the disease, she would still survive and improve her livelihood in some ways.

“God is there. I surrender my life in his hands. He would have opened other doors for me to get ways of living while locked down if the government opted otherwise,” she says.

A section of youths and a women are vending some food items to travelers at the bus station. When the full passenger bus stopped, what the entire group does is scrambling to sell their merchandise.  Some who are lucky to have some locally-made facemasks, are forced to put them off to raise their voices at travelers for a purchase.

The outbreak of the deadly corona virus disease (COVID -19) has recently changed the mode of life and ways women and youth eke out a living while avoiding the risks at all costs.

My simple view is that the mitigation measures applied to combat the spread might be fatal to poor women, youth their little children during the time out to earn for a living.

This time around I have recently been forced to work half day for fear of possible crowded commuter buses on my way home during peak hours. As I move around the city of Dar es Salaam on a daily basis to execute my duties, I learn a lot regarding how members of the public respond to the shocks of the deadly diseases.

Definitely, public education is being received well and slowly people social behaviors are changing. A number of small scale traders are wearing face masks. Many people are using some cloths to sew some local facemasks that they sell at 1000 Tanzanian shillings which is approximately 0.43$.

COVID-19 has struck many people hard

James Kamala is a journalist from Dar es Salaam . This article is part of the GL News Service Gender and COVID -19 news series.