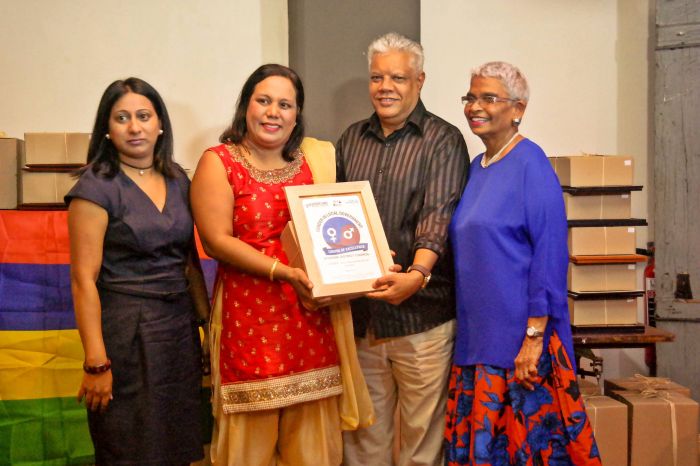 Port Louis, 13 April: I have fought many battles. When I was a child I was discriminated against because I was plump and had curly hair. I did not have the same consideration as my two sisters and my brother. My eldest sister was treated like a princess, my youngest sister was the protected one and my brother was the long-awaited son, a gift from God. This forged my character and I became the one who could face all challenges.

When I got married, life was tough as Dev, my husband and I were both students in a foreign country. Food was scarce as we did not have enough money. After my studies I got a good job at the Edinburgh Chamber of Commerce. We shared food with our friends.

When we returned to Mauritius my husband fought for his ideas and became a political activist. The prison became his second home. During his longest period of imprisonment of one year – Saskia my eldest daughter was three and a half years old and my youngest one, Anushka was only three months old when their father was arrested under the state of emergency – I prepared food for 6 political prisoners. Food was scarce in the house as I was the only bread winner. The political prisoners were allowed to have food from home. I did better and provided food for five of my husband’s mates as well. There were 24 of them. I became creative with my cooking and did miracles with what I could lay my hands on. This helped me to become the good cook that I am.

Now, Corona-Virus is looking at us straight in the eyes and telling us, “You cannot see me but I can see you and I will show you how strong I am”. Yes, indeed. I was not prepared for that although the virus had already struck other countries. I was like all Mauritians thinking that the Virus would not reach our shores. Alas how wrong was I. But in my wisdom, I decided to do some shopping for my 93 years old mother who lives with a urine bag and has a care-giver living with her. I did her shopping for three months and bought urine bags as well. I also made sure with her Doctor that she would continue to visit her twice monthly.

Coming back home late at night I listened to the radio. Oh horror! At 11.00 p.m. the Prime Minister announced that the country would be in confinement and everywhere would be closed including supermarkets and bakeries.

I did a quick audit in my pantry and my fridge and thought I would be among the lucky ones as I had food for a few days. I did not know that the worst was still to come. After a week of confinement, the Prime Minister announced a curfew. The outcry among the population became uncontrollable. The Government decided to deliver basic necessities and food to the needy as well as shelters. Of course, I do not fall into this category.

When the tough gets going and the going gets tough, as our friend Colleen likes to say, my mind worked overtime to find solutions. The stories of my grandmother came to my mind. She always said how people used to share food during the war. But “grandma, they were not locked between four walls”.  Then, I told myself a little food can go a long way with creative thinking. Anushka, who lives at the back of my house, and I decided to put together whatever we had together so that we could have food on the table every day. My neighbour left eggs on my doorstep and while writing this piece, a friend left pulses, rice and flour on the doorstep. No bread but we can make chappatis. No meat but we can eat pulses. No toilet paper but we can use water. No bottled water, tea or coffee, but we can drink herbal tea made from herbs in the garden.

Some days ago, the authorities took the decision of opening supermarkets but with strict sanitary control, social distancing and in alphabetical order. As both my husband and I are over 75 and have health problems, we have been advised not to join the queues at the supermarkets. Anushka being asthmatic cannot go out either. We have therefore decided to order food on line. But we have been advised that the food must be left outside the house for at least 24 hours before using them. We do not mind as long as we know we will have the luxury of filling our stomach.

My heart breaks for my two grandchildren. One is in the epicentre of the virus, Strasbourg, where a Mauritius Doctor lost his life trying to save the lives of Covid-19 patients. My thoughts go also to all those affected and infected with the virus especially women and children. A couple who is tested positive do not know what to do with their two-year-old child who is negative. A twenty-year-old girl was cremated in the absence of all close relatives as her parents had been tested positive.

The virus, unfortunately, discriminates against people especially women. We are not all equal in front of this Virus. Women suffer more not only because of family responsibilities as gender-based violence has increased.

The Covid-19 has forged my character even more and the fighter in me made me look at this invisible enemy in the face to tell him, “This is another battle that I have decided to win.”

Loga Virahsawmy, is a board member at Gender Links. This story is part of the GL News Service Gender and COVID 19 news series