News Global: Inequality at the centre of climate change... 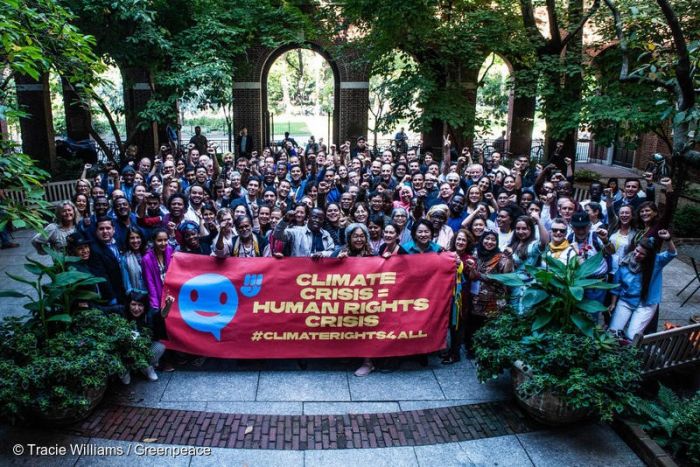 New York, 27 September: “The longer we wait, the harder it will be to turn the climate crisis around,” these were the words of Greta Thunberg a young climate activist ahead of the UN General Assembly climate action summit.

It has taken this Swedish teenager, to knee jerk the world’s leaders from their rhetoric speeches at the United Nations General Assembly on climate action held on 23 September in New York. This is an indication of how climate change is now more than ever affecting the future livelihoods of the current and next generations.

At a people’s summit led by Amnesty International and Greenpeace International, ahead of the Climate Strike and UN Climate Action Summit, 177 participants gathered in New York from all over the world to discuss the human rights implications of the climate crisis. Amongst the participants were gender activists form the global south who interface daily with the gendered dimensions of climate change largely caused by use of fossil fuels.

In New York City, the message from the youth was clear. The youth wanted the world leaders at the UN Climate Action Summit to get off fossil fuels, to have a just transition to renewable energy, and hold polluters accountable. There is resounding belief that polluters need to be held accountable because of their violation of the future. Over four million people took to the streets all over the world in 150 countries.

Speaking at the people’s summit Kumi Naidoo, Amnesty International Secretary General noted “We cant have human rights on a dead planet…The climate emergency is the defining human rights issue for youth today. It will shape their lives in every way,”

The people’s summit declaration pronounced that certain mega businesses, particularly the fossil fuel industry and large-scale agribusiness and their financial backers are at the core of the destruction of the environment. Many such businesses have wilfully disregarded their responsibility to respect human rights, further contributing to infringements of the human rights of women, children, Indigenous Peoples, local communities, and other disproportionately affected groups, and to the destruction of ecosystems across the planet.

The gender equality struggles on climate change have forced thousands of women to lose control of land, clean water, energy sources and food security. As women bear the brunt of climate change, the message is clear that women and youth have to be at the centre of the climate action movement.

According to Global Witness, at least three climate change activists are killed each week globally largely due to big businesses protecting their profits made from environment destruction. These are supported by selfish political figures whose palms are well oiled by these conglomerates. Unfortunately, women in particular from the indigenous communities suffer additional abuse perpetrated by climate change. The people’s summit raised concerns about killings; gender-based violence, threats, harassment, and criminalisation of environmental human rights defenders that are escalating all over the world and often go unpunished.

At the United Nations General Assembly on climate action, UN Secretary General Antonio Guterres told leaders “what once was called ‘climate change’ is now truly a ‘climate crisis’; and what was once called ‘global warming’ has more accurately become ‘global heating’.” The race against climate change should be fast paced with women and youth leading.

The SADC Protocol on Gender and Development has rightly recognised the importance of the climate crisis through a standalone Article on climate change. This is cross-referenced with the Protocol on Environment, which, includes a full section on gender equality. The gap at the global and SADC stage has been clearly lack of political will to have concrete gendered actions on climate change. This is the reason why clean drinking water is a luxury to many, why many women toil arid pieces of land resulting in perennial food insecurity.

Gender equality movements such as the SADC Gender Protocol Alliance have an urgent role to play on climate action. This includes ensuring a sustainable environment that will be enjoyed by future generations. Climate action is an intervention where civil society and governments have to collaborate strongly with the private sector to reduce carbon emissions. With renewable energy sources still a pie in the sky for many women playing multiple roles, it is clear that political will to make such sources accessible is critical. The Southern African region is battling with electricity supply igniting thousands of trees to be cut down daily for firewood. Southern African countries need to rise and pronounce concrete actions to protect the environment, which they fell short of doing at the UN Summit. Close monitoring of gender equal climate finance is critical as most countries battle corruption.

Surely, time is running out to turn around the climate crisis. However, there is hope  when women and youth are given the opportunity to have #VoiceandChoice on environmental protection. The climate crisis is a human rights crisis – it is a human survival battle. For now, few have realised the force towards change to preserve the planet – women and youth. The time for climate action is now not tomorrow.

Sifisosami Dube is the Head of Governance and Sexual Reproductive Health and Rights at Gender Links. This article is part of the GL News and Blogs

Comment on Global: Inequality at the centre of climate change crisis Cancel reply