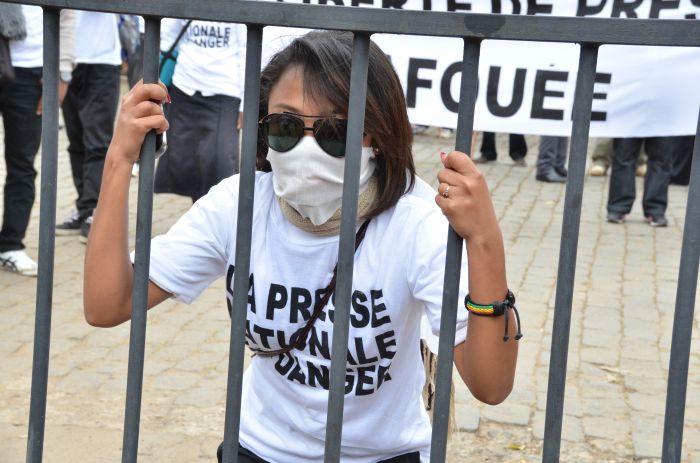 Johannesburg, 3 May: On 3 May, we commemorate World Press Freedom Day (WPFD) under the theme “Information as a Public Good”, calling attention to  the  essential  role of free and professional  journalists  in  producing  and  disseminating this information, by tackling misinformation and other harmful content.”

This year’s celebrations take place amidst increasing evidence of online violence against women and and in particular against women journalists which has been exacerbated by COVID-19. Women’s participation in the media is clearly under threat leading to self-censorship

30 years since the passing of the Windhoek Declaration (1991) promoting an independent and pluralistic press, the media is still struggling to achieve this goal.

Although free media is largely described as a mirror in which the public can see itself this reality is not fully reflected. Women are underrepresented, misrepresented and often treated unfairly in the media. Despite years of activism, education and advocacy aiming at ensuring safety of female journalists, all voices are heard, equal opportunities are created and equal treatment is practiced the media still falls short.

According to the 2020 GMPS almost half of Southern African Development Community (SADC) countries score higher than the regional average.  Seychelles maintained its position as one of the better performing countries at 30% and is the only country that reached 30% women sources (the highest amongst all countries  ). Democratic Republic of Congo , Tanzania and Zambia have the least proportion of women’s voices in their news content Although the DRC is amongst the least performing countries in terms of reflecting women’s voices and views there is a significant increase of 11 percentage points since the last Study.

With women’s voices making up only one fifth of those whose views and voices are heard in the news media this is evidence that only a fraction of reality is reflected. Gender censorship is still a glaring reality in the absence of plural voices. Under representation of women’s voices is systematically silencing and side-lining women from being heard on issues that equally concern them.

The GMPS puts a huge spotlight on media practice, professionalism and ethics. The media’s failure to amplify women’s voices acts against the principle of just and inclusive societies.

Gaps are also persistent in the low representation of women in the media sector especially in the decision-making levels. Women in most SADC countries consist 52% of the total population, but their representation at the decision-making position is still low. A 2018 Glass Ceiling: Women in South Africa media houses for example shows that although there is an  increase in the proportion of women in management positions there is  still no parity . Women journalists are also subjected to unfair practices in their newsrooms where many times they are stereotypically assigned to certain types of stories or roles, which paralyses their ability to break the glass ceiling in the media sector.

This year,  Gender Links (GL), with support Advancing Rights in Southern Africa (ARISA) assess the prevalence of online violence against women and its impact on freedom of expression and democratic participation.

GL will also be launching the Gender and Media Progress Study 2020 at a date soon to be announced. The launch will also reflect on the findings of the GMPS 2020 and recommend forward strategies that can help strengthen gender sensitive and responsive media practice.

Tarisai Nyamweda is the Communications for Social Change Manager at Gender Links.