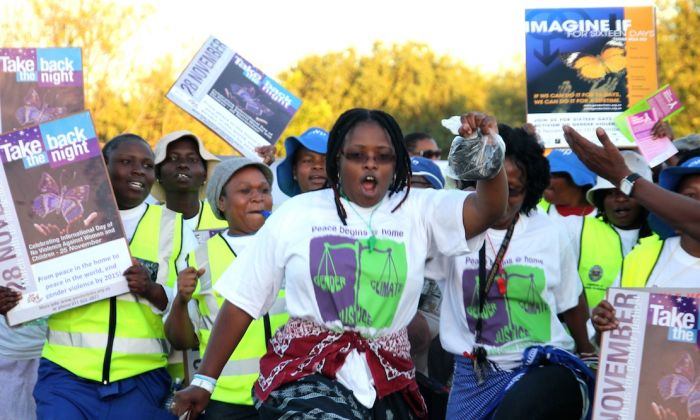 Johannesburg, 8 March: She is eager to participate meaningfully in society, she is eager to transform her children’s lives for the better, she is hardworking – yet she is confused why there are so many variations of ‘women’s empowerment’. Saziso has attended training on starting a business, she is part of a women’s club putting their money together to purchase implements for gardening in a piece of land given to them by the local authority. However, she feels there is more she can do to change her life, that of her children and peers. The quick answer that comes to her mind is connecting to other women in a safe space – that is the basic of women’s rights movement building.

Now is an exciting time in human history; a time for reviewing the ground breaking women’s right instrument Beijing Platform for Action, a time of transition and unprecedented change as we gear towards the 2030 Sustainable Development Goals. In this connected world – climate disruptions with likes of Greta Thurnberg handing climate change petitions to power; Arab Springs defining history; nationalist agendas galore – with some gone wild; communities challenging how conglomerates use their land, all amidst epidemic threats disrupting world economies – it is paramount that the women’s movement borrows lessons and goes back to the drawing board for a more transformative movement building in pursuit of socioeconomic justice. This calls for disruptive thinking and action on how women’s rights movements ought to be built.

Women’s rights movements have been traditionally built through seizing people’s attention and loyalty in a slow fashion, often driven by large amounts of money from the donor coffers, by those with access to power in the name of policy change, individualistic approaches held by a few and top/bottom approaches. Many women’s rights movements have crumbled or have been fragmented due to power struggles from within and lack of resources. Successful movements in the recent past however, have shown that the currency is being fresh in people’s minds, connecting them to their own realities and yet to a greater good. They are made and led by many, open and not closed and are peer driven.

How then do we define and cultivate the right individuals who will make a difference to a successful transformative women’s rights movement?

Find the right connectors. In the present era of women’s movement building, individualistic approaches that leave many behind will not survive. The success of movements such as South Africa’s Total Shut Down movement garnered attention due to a cause to end gender based violence, supported by all in the movement. It is critical in this era to find the connected persons, the right seeds for the harvest in order to build transformative women’s rights movements. Often in this generation these have huge social medial followership. These are legacy builders and choose to live a life to make a difference. There is need to spend time to clarify the path to entry of a movement and lower the entry barriers. The time for filling volumes of forms to be part of a movement are long gone. Ease of access to movements is critical and a sense of belonging for those who are part of it must not be ignored. The agenda of movement building must be clear to both the individual in the movement and others in it.

The stockvel movement in South Africa for example is a clear example of avoiding linear ways of building movements. There is dwindling vibrancy and fragmentation of the women’s movement in Southern Africa and continentally due to limited financial resources, yet patriarchy continues to poke its ugly head in women’s daily lives. The linear way of building women’s rights movements is simply no longer effective. Women’s rights have been successfully engrained in Africa’s Protocols and development instruments for at least three decades. The political will to develop instruments in Africa is commendable yet there still seem to be parallel lines between the development agenda and the emancipation of women’s rights in Africa, especially Southern Africa. The region and the Africa continent requires a new wave of building the women’s movement for the present and the future, yet usurping critical lessons from the past.

Connect people to a greater good cause. In the era of millennials, there is need to distil what a women’s movement mean as ultimately it should be a cause that matter to people – young and old. At the heart of such causes is the pursuit of justice. For most of the continent, it borders around socio-economic justice. Topical issues such as equal pay for equal work, non-negotiables in ending gender based violence, access to the right and correct information, creating platforms for the many women who build the economy and yet do not get to benefit are issues that cannot be ignored in this era. Women’s right causes on environmental sustainability, health care, access to economic opportunity and gender justice remain critical in the women’s movement. Globalisation has unfortunately brought every issue on our humble African doorstep therefore change is no longer a choice but a must.

Allow people to tell their own stories. It is clear that women’s rights movement building cannot thrive in silence. There is need to make noise for change to happen. Creating platforms for people to tell their own stories is critical. It is imperative that we remove paternalistic approaches to storytelling – who are we to tell you how to tell your story?  Cultivating agency through art, telling stories through social media, using humour including comedy even to tell the most uncomfortable stories all sum up the game changers in this era of movement building. Online communities are game changers in women’s movement building. These can spread like fire and yet the women’s rights movement should guard against cyber space abuse.  The plethora of hashtags on social media are all exciting, yet without a clear pathway, they will easily dissolve into cyber space with no legacy for women’s rights.

Take incremental steps, it’s not a sprint. The world is your oyster. Now is the time to take incremental steps to launch a new wave of women’s rights movements and yet correct what has gone wrong. There are now no geographical barriers in movement building. The linear thinking that women’s rights movements must be institutionalised should be abandoned. Technology, theatrical creativity and community spaces are disruptive ways of pooling scarce resources for a successful movement. Intergenerational spaces will draw lessons from the past, build innovations for the future and enable cross generational activism.

In conclusion, building the women’s rights movement should recognise individuals and communities as whole and acknowledge that for society to change, movements should mirror and prefigure the transformation that we want to see. Developing strategies that identify unconscious behaviours in individuals to lead with bold purposes and audacious visions is the game change for women’s rights movements now.

Sifisosami Dube is the Head of Policy and Movemnet Building at Gender Links. This article is part of the GL News and Blogs