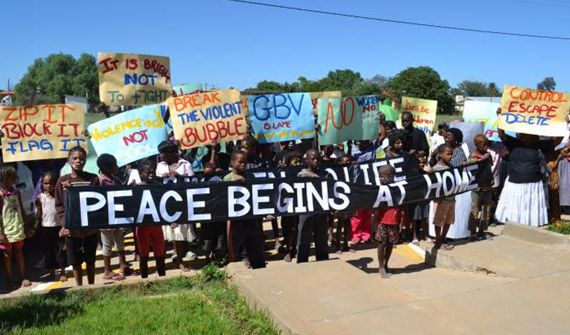 Blantyre, 6 November 2020 – The Association for Women in Media (AWOME) in Malawi, has demanded that rapists should be jailed for life following increased cases of rape and defilement in the country.

The calls follow a gruesome defilement of an 11-year-old girl in Chikwawa, a district in southern Malawi a fortnight ago. She is currently receiving treatment in a country where perpetrators of sexual violence in most instances, bread winners, get away with it as families shield them for fear of losing financial support.

AWOME members held demonstrations in the cities of Blantyre and Lilongwe where they appealed to authorities to hand stiffer penalties to perpetrators of sexual violence to serve as a deterrent to would-be offenders. They carried placards with messages “Hang the rapists” and “They are girls, not your toys”.

Edyth Kambalame, AWOME chairperson said women journalists are tired of reporting on distressing and heart-breaking stories of women and girls who are sexually abused by what she described as irresponsible men.

She now wants the government to implement all legal provisions that protect women and girls from perpetrators of sexual abuses and that shielding of offenders should be criminalized forthwith.

“There are cases where perpetrators have been prosecuted but obviously the punishments have not been a deterrent to other offenders,” Kambalame said.

AWOME member Josephine Phumisa told the media the protests are a result of the anger and outrage at the rising cases of rape and defilement cases in the country.

“We are tired of writing stories about rape and defilement every day,” she said.

In a petition to Malawi’s Ministry of Gender, Children and Community Development AWOME said “as we go about covering such stories, we have come across heartbreaking stories of what numerous women and girls have gone through at the hands of men who behave as if they have no control over their sexual feelings. So many women are living with the trauma of their unfortunate experiences.”

Reads the petition: “Women are generally becoming more and more helpless on these issues, even when they are supposed to be protected under both local and international legal instruments.  We have written about these ills and used our platforms to raise awareness about the escalating levels and the need to find a lasting solution. We acknowledge the fact that in some cases perpetrators have been prosecuted but obviously the punishments have not been a deterrent to other offenders.”

The petition adds that “We come to you today because the “Ministry of Gender, Children and Community Development is mandated to provide policy guidance for women and child development services. This ministry was instituted with the aim of promoting the welfare and protection of women and children. We believe that the ministry will therefore be able to champion a long lasting solution that will see not a decrease, but an end to incidents of rape and defilement.  We have confidence that the ministry will ensure the necessary enforcement of laws, policies and instruments that will free women and girls from sexual violence.”

The Speaker of the National Assembly who joined the march in Lilongwe called on the nation to fight sexual abuses on all fronts. She also condemned women who shield abusive men who are perpetrators of rape and defilement in families.

“We want anything that is in the Child Protection Act to be implemented. Let us unite to fight all forms of abuse. Mothers should also stop shielding abusive men for fear of losing financial support. Such mothers should also be prosecuted,” she said.

“We want stiffer sentences, up to life as prescribed in the penal code. Those who shield sexual offenders must be proactively prosecuted according to the law,” they said in their petition.

Most of this violence is intimate partner violence. Worldwide, almost one third (30%) of women who have been in a relationship report that they have experienced some form of physical and/or sexual violence by their intimate partner in their lifetime, according to WHO.

* Joseph Kayira is a journalist from Malawi. This article is part of the Gender Links News Service