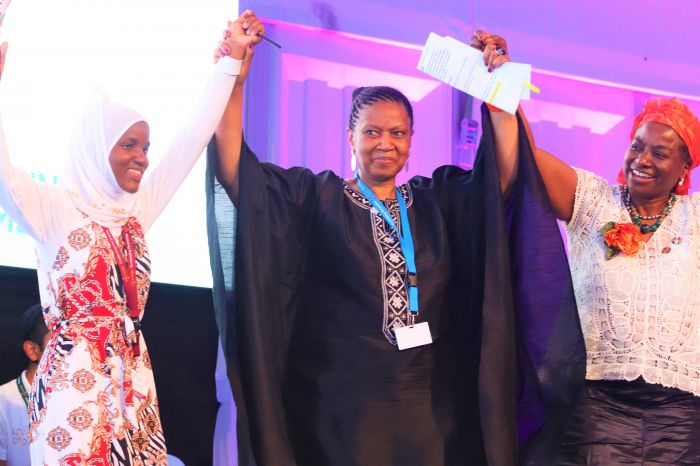 Nairobi 14 November 2019 – The Nairobi Summit on ICPD25 concluded today in the Kenyan capital, with partners making bold commitments to transform the world by ending all maternal deaths, unmet need for family planning and gender-based violence and harmful practices against women and girls by 2030.

“The Nairobi Summit represents a renewed, re-energized vision and community working together to act and deliver. Together, we will make the next ten years a decade of action and results for women and girls, keeping their rights and choices at the centre of everything we do,” said UNFPA Executive Director Dr. Natalia Kanem.

The Summit, co-convened by the governments of Kenya and Denmark with UNFPA, the United Nations sexual and reproductive health agency, unveiled critical new data about the cost of achieving these goals. It mobilized more than 1,200 commitments from around the world, including billions of dollars in pledges from public and private sector partners. It also raised the voices of marginalized communities, youth and grassroots advocates, who were able to directly engage heads of state and policymakers about how to realize the rights and health of all people.

“The Nairobi Summit on ICPD25 was a massive success,” said Director-General of the Kenya National Council for Population and Development Dr. Josephine Kibaru-Mbae. “But it was only a start. We leave Nairobi with a clear roadmap of actions we must all take to advance the ICPD agenda and transform the world for women and girls.”

The Summit opened with the release of new research showing the price tag to achieve “three transformative results” — zero maternal deaths, zero unmet need for family planning, and zero gender-based violence and harmful practices — within the next decade. The total cost to the world would be $264 billion, according to the analysis by UNFPA and the Johns Hopkins University, in collaboration with Victoria University, the University of Washington and Avenir Health.

Summit attendees then stepped up with specific and concrete commitments to help the world reach these ambitious, but achievable, goals. Pledges were made by governments, civil society, youth groups, faith-based organizations, academia and many more.

Governments including Austria, Canada, Denmark, Finland, France, Germany, Iceland, Italy, Netherlands, Norway, Sweden and the United Kingdom, together with the European Commission, committed around $1 billion in support. The private sector also stepped in: Children’s Investment Fund (CIF), The Ford Foundation, Johnson & Johnson, Philips, World Vision and many other organizations announced that they will mobilize some $8 billion in combined new pledges.

“There will be no ICPD50. Women and girls around the world have waited long enough to have rights and choices,” said Ambassador Ib Petersen, Denmark’s Special Envoy for ICPD25. “Looking towards 2030, we now enter a decade of delivery during which we will walk the talk and hold all of us to account for the commitments we made in Nairobi.”

Over 9,500 delegates from more than 170 countries took part in this radically inclusive conference, uniting behind the Nairobi Statement, which establishes a shared agenda to complete the ICPD Programme of Action.

The same way the original 1994 International Conference on Population and Development in Cairo was a turning point for the future of women and girls, the Nairobi Summit will be remembered as a watershed moment that set in motion actions that saved lives, lifted millions of women and girls, their families and communities from exclusion and marginalization, and enabled nations to harness the demographic dividend to grow their economies.