News “Leave no woman behind in political decision mak... 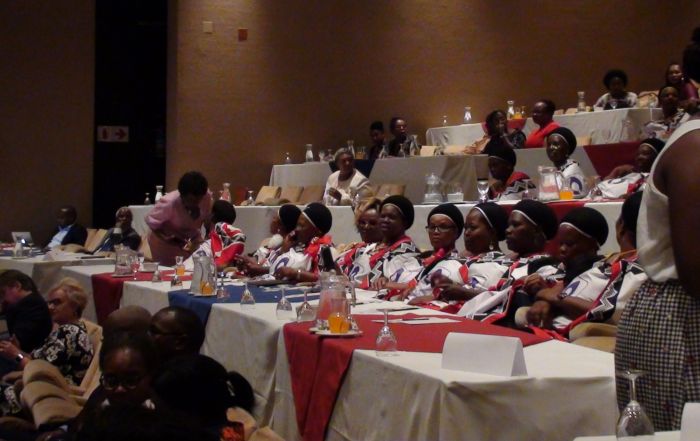 “Leave no woman behind in political decision making”

The Swazi nation marked the International Women’s Day in Swaziland on the 8th of March 2018. This was the day to commemorate the struggle for women’s rights and celebrate their participation in political, social, cultural and economic attainments throughout history while calling for gender equality. The day also marks a call to action for accelerating gender parity. The theme for Swaziland was “Leave no Woman Behind in Political and Decision Making.

The Director Gender and Family issues –Mrs Jane Mkhonta-Simelane gave the background of the International Women’s Day, by saying it was commissioned by the late King Sobhuza 11 before 1968, whereby he established “Lutsango LwakaNgwane” to represent women in political, social, cultural and economic issues in Swaziland. It was then celebrated by the United Nations for the first time in 1975, 8th March, in Nairobi.

Beforehand there was a remarkable woman, the Queen Regent, Queen Labotsibeni who was the grandmother to King Sobhuza 11. She reigned twice as queen and she was in power at the most critical time in Swaziland. She stepped in and saved the country from Boers while making allies with the international community. She chose peace rather than war. In 1903 she evidently realised the value of education and she pioneered the building of the first Swazi nation school called Zombodze with the help of the government.

Swaziland has been advocating for women in leadership position for long, Marry Mdziniso was the first woman in parliament before independence (1968). Then other women who followed her was Lomasontfo Dludlu who was illiterate but worked hard for her community. There was also Dr. Fanny Frifzman who was the first woman Principal Secretary during King Sobhuza’s reign and she was also appointed Minister of Health during the current king’s first parliament. There was also Constance Simelane-former Deputy Prime Minister, first PS Deputy Prime Minister’s office-Khangezile Mabuza. Linda Vilakati was the first chairperson for “Sukumani Bomake Women’s Association” established in 1975.

UNFPA Resident representative Ms Sharareh Armirkalili she said this year’s theme is pioneered with this year national elections to call upon us men and women to work together to ensure exclusive participation of women in political and decision making positions in the  country.  The theme is further inspired by the fact that women too are unique individuals with unique leadership skills and have the potential to enhance decision making processes. Therefore there should be no doubt on our minds that women potential if fully tapped into can take the world to greater heights.

The honourable Deputy Prime Minister – Senator Paul Dlamini said firstly the society at large must know women are colleagues to men thus they can be given equal chances in life. He urged parents to raise both a girl and a boy child in the same way. Also, he enquired women to start being active back in their communities before serving at the parliament, so that their own people can know them better before casting their votes.

On the other hand Senator princess Phumelele said we should raise with an impact that she can become a leader tomorrow and also that we as a country must revive the confidence of women to stand up for elections. Seconding the notion was also Chief Representatives Mawandla Gamedze said we need to believe and embrace that women can occupy leadership positions. He also added that this has to be a process whereby all societies are taught to value women and again appoint potential women into leadership positions.

Entertainment was from Edutainment Siyembili Arts group advocated that women should be involved in political and decisions making positions, they said they should unite and stand up and be well represented in the upcoming elections. They also advocated that even men can nominate women for the elections or any leadership positions.