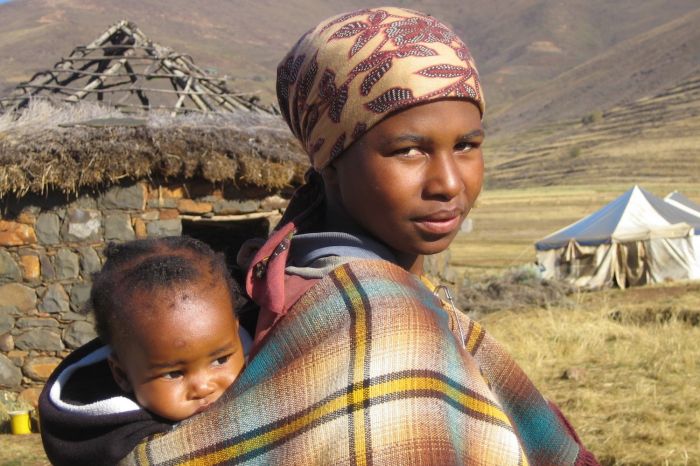 Maseru, 10 May: There  is a disturbing trend of children who get married at the young age in Lesotho. This happens mostly in the rural areas of the country where poverty is rife.

The Women and Law in Southern Africa (WLSA) Senior Programmes Officer Attorney Mohau Maapesa says they are also concerned about child marriages in the country. But what frustrates them to act are the Laws of Lerotholi and the Marriage Act of 1974.

She says the Laws of Lerotholi which are the codification of the Lesotho’s Customary Law allows anybody to get married as long as they are over puberty age. The Civil Law allows a girl to be married at the age of 16 while a boy can marry at the age 18.

Maapesa says both these systems of the law allow the child marriages because both partners are not yet capacitated to get into marriages.

She says they are now lobbying for the policy change so that the parliament could amend or revise the law.

There is a loophole in these laws and this allows the child marriage to thrive, Attorney Maapesa argues. She says the marriage involves a couple of issues which include permanent sexual activities and child bearings.

Research shows that bodies of children who get into early marriages are not fit enough to carry babies, Attorney Maapesa says.

She says when they follow up cases of girls who get married at underage, their efforts end up useless because such girls usually end up being married by their rapists through customary marriage.

Rapists sexually abuse the children and hide under the Laws of Lerotholi,” Attorney Maapesa says, adding that these rapists later pay lobola to marry underage children.

Maapesa says such acts not only immoral but also illegal because the girl children live with the perpetrators. She says they have paralegals that the organisation has deployed in some community councils in the districts of Thaba-Tseka, Mokhotlong and Quthing to sensitise the community about child marriages.

However, they are intending to roll out these sensitisation campaigns to other districts with the same motive of sensitising the communities of the effects of child marriages.

She says there is a ray of hope that they would succeed because they have successful stories of children who were married at underage but were able to return to their parents.

Her Majesty ‘Masenate Mohato Seeiso, says national and community leaders should take action in ending child marriage in the country. The Queen says it is every one right to protect children against all forms of abuse, including early marriage and ensuring that legal action is taken against perpetrators of early marriage.

She says we should all have the responsibility to ensure that laws protecting children are implemented.

A UN 2015 report reveals that one out of five girls in Lesotho is married before they turn 18 years old.

This alarming trend among young girls prompted Queen ‘Masenate to encourage everyone to stand up to end child marriages  which undermine the rights  of girls who  have to suffer physical , emotional  and mental scars   as  a result of early  marriage.

The Adolescent Programmes Manager at the Ministry of Health ‘Mathato Nkuatsana also shares the same sentiments with Attorney Maapesa that when the girls become married at a young age, their bodies are not fit enough to keep babies while pregnant.

Nkuatsana says while girls become pregnant at the young age, they create high chances for maternal mortality and morbidity.

Another issue that usually comes into play according to Nkuatsana is that the young girl becomes depressed.

HIV Aids and other Sexually Transmitted Infections (STIs) are also common in young marriages, she says.

National Orphans and Vulnerable Children’s Coordinator from the Ministry of Social Development Rantsane Kuleile says they organise sensitisation programs in collaboration with other stakeholders such as the World Vision and the United Nation’s Children Fund (UNICEF).

He says where a girl child has entered into a child marriage, they help to get the child back to school   and help her get the bursary.

He says poverty is what mostly pushes these girl children to enter into marriages at younger ages. To solve this challenge, Kuleile says they create environment that protects children legally.

However, they face a brick wall because of the dual system of law that governs the country.

Kuleile says the two systems are not harmonised and create loopholes. He says they are strongly pushing for repeal of the Laws of Lerotholi because they allow children to be married as long as they are at puberty stage.

Kuleile says perpetrators use these laws to escape ends of justice and this unfortunately impacts negatively on their interventions.

Unless there are reported cases of child marriages at the police, Kuleile says they are unable to come in between and to institute legal proceedings against the perpetrators.

Kuleile says they experience incidents where young girls are married and the family members shield such marriage from being known. Therefore, he says, they fail to save the girl and her life.

He says culture also plays a significant role in promoting these child marriages citing that in some parts of the country such as Quthing the communities there do not see child marriage as unlawful.

Another strategy to fight the child marriage used by the Social Development is to work closely with the Ministry of Education and Training to allow the child to continue schooling even during pregnancy.

Kuleile says the intention is to save the future of the child.

A member of Ts’anatalana Community Council Tumelo Chitja says he organises public gatherings in his Electoral Division to sensitise the communities that child marriage is illegal.

He says he has appealed to the people to report this marriage to the Chief who is in turn expected to report it to the police.

He says his community council has been equipped with skills to spread the message to the public by the Gender Links Lesotho.

There is progress but it seems we still have a lot of work to do on the ground,” Chitja says.

Gerard Molupe is a journalist from Lesotho This story is part of the #VoiceandChoice Campaign series . It was first published in the Nation newspaper in Lesotho

One thought on “Lesotho: Fight to end child marriages rages on”

I agree that customary law of Lerotholi should come to and end (to be amended and revised).This is the new sanctuary, women and girls should have liberty.The Attorney of law and health department emphasized that child marriage has unpleasant health issues on the body of a pregnant young girl.They voice out for the voiceless and empower them. The Youth should focus on studies and their better future