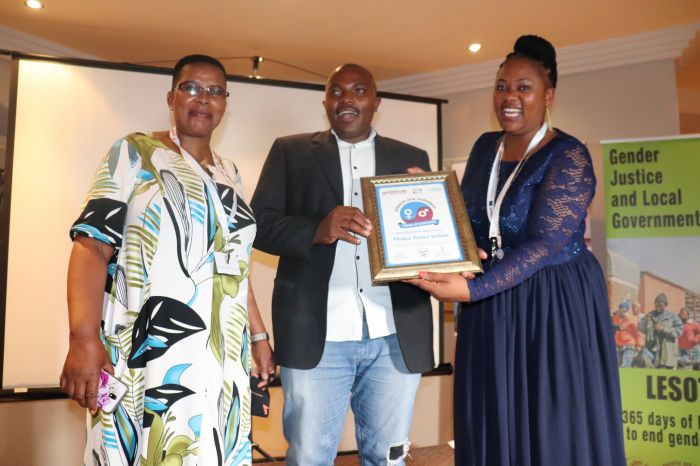 Maseru, 6 November 2020: The Lesotho #VoiceandChoice summit running under the theme: Local Action for a strong 2030 A-gender in Southern Africa which was hosted for local authorities ended on a high note today with an award ceremony for the best good practices. During the summit, which was held on 3-4 November 2020, 50 local authorities presented their institutional profiles and best practices and there were five winners consisting of 2 urban councils and 3 rural councils in the categories of overall performance, most resourceful council and best improved council. The summit brought together a total of 70 participants of which 41 were females and 29 were males drawn from Gender Focal Persons from the 50 local authorities, representatives from the government ministries, representatives from the civil society organisations, members of parliament, donors and the Minister of Gender and Youth, Sports and Recreation.

The summit was supported by the Ministry of Gender and Youth, Sports and Recreation and the Ministry of Local Government, whose representatives were judges and also officiated at both the opening and the awards ceremony.

Speaking at the summit Minister of Gender and Youth, Sports and Recreation, Honourable Likeleli Tampane who delivered the key note address reflected on the year that has been filled with multiple challenges, which have been brought about by the outbreak of the COVID 19 Pandemic, including loss of jobs for many women and increase in gender based violence. Tampane noted that a majority of women work in service sectors such as retail, hospitality and tourism which are the sectors that have been highly affected by the regulations to combat the spread of COVID 19. These women are unable to support their families and this makes them vulnerable to abuse by their male partners. “During the time of lockdown, cases of gender based violence took a hike as many women found themselves at home with their abusers. As the pressure of food insecurity was mounting a lot of women and children were beaten and raped and some were admitted into the facility that is managed by the MGYSR where they were treated for both physical and emotional scars”
Tampane congratulated GL and its partners on the #VoiceandChoice campaign as it places the Sexual and Reproductive Health and Rights (SRHR) of women at the centre. She stated that COVID 19 has denied women access to essential SRHR services such as access to contraceptives, maternal care, safe abortion and HIV and AIDS services, which are central to health, rights and well-being of women and girls. Taking the campaigns to the local level will ensure that in the future as pandemics like COVID 19 come clinics and hospitals do not ignore the SRHR services. She emphasised that it is the responsibility of all women parliamentarians to have a voice and lobby their male counterparts for the enactment of legislation to protect the rights of women. The Minister ended her speech by asking all present to observe a moment of silence for all the women and children who have lost their lives as a result of gender based violence.

The Ministry of Local Government representative Malefetsane Nkhabu congratulated Gender Links (GL) on the great work of mainstreaming gender into the council plans. He commended GL as one of the few organisations that understands decentralisation of services, by implementing its work at the local level. He committed to giving the event report to relevant departments in the Ministry of Local Government which he hopes will open the avenues for the Ministry to take ownership of such summit in order to ensure sustainability beyond the intervention that GL has provided.

Mapuleng Secheche, from the Ministry of Gender and Youth, Sports and Recreation, expressed the Ministry’s gratitude for GL’s work, which is helping the Ministry achieve its mandate of ensuring that gender equality is achieved in all spheres of life. “As the SADC Gender Protocol Summits continue every year, I am continually amazed at the amount of work that councils are doing to mainstream gender into their activities. I believe we as the Ministry of Gender need to assist these councils by providing some capacity building workshops and the refresher trainings on gender mainstreaming,” said Secheche.