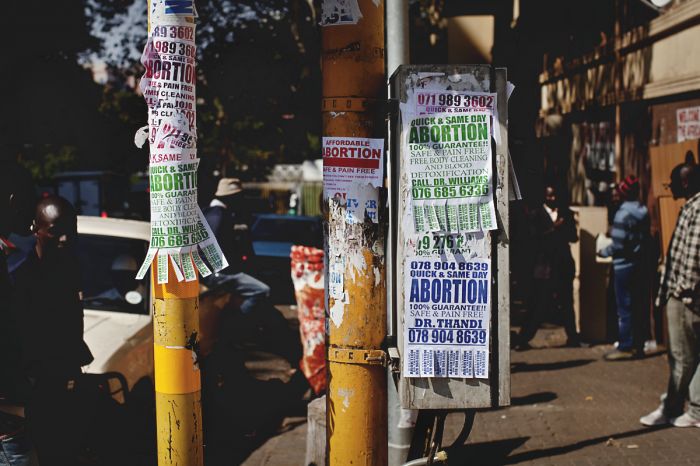 Bulawayo, 27 April: For many women who cannot brave the unknown and go to the backyard abortion clinics, all hope is lost as South Africa has been a place of refuge for many Zimbabwean women with unwanted pregnancies.

A 900km trip to Johannesburg and a booking at a clinic was what it took to escape a lifetime of regret and raising an unwanted child. For many, the trip was worth it. Many wished to go, some did not have the funds, others had to part with an arm and leg to raise the money, but at least there was the option to go.

Now, with Covid -19 raging, countries have closed borders, governments have gazetted lockdowns. Although South Africa is now on level 4 lockdown and Zimbabwe announced a level 2 lockdown where some restrictions have been relaxed the borders to South Africa remain closed.  But people have not stopped getting pregnant. Some pregnancies are from forced sexual encounters.

In such times, many women are vulnerable.

The subject itself remains taboo in the country. Talking of abortion in some circles is found offensive.

When South Africa was on lockdown the first 21 days, many were patiently waiting for the days to end. Now with the extension this means that the hope to travel to the neighbouring country for safe termination of pregnancy continues to diminish. Many are running out of time, and time in such instances is an asset.

Hope Dhliwayo*, from Bulawayo’s Emakhandeni suburb is between a rock and a hard place as she was scheduled for an abortion at a clinic in Parktown, Johannesburg in the first week of April.

Just when she thought all was in place, there came along a covid-19 lockdown and a lockdown extension followed restricting all travel.

“I had been planning to go to South Africa. I’m three months pregnant now. I was still trying to sort out the money, so that I stay at a cousins flat who works as a waitress at one of Johannesburg upmarket restaurants, just as I was sorted moneywise, the umalayitsha I wanted to travel with said he was no longer coming to Zimbabwe as he did not want to be stuck this side during the lockdown. We agreed that I will travel as soon as the lockdown is over. Now they have extended the lockdown and I am running out of time. I’m almost left with no choice but to go to the backyard services. But I am scared,” she said.

One woman who works at a local salon, only comfortable to be identified as Thembie, is known to be making a lot of referrals, especially for college students, for a local doctor who reportedly performs terminations at his surgery, but it comes at a price.

“Now with the lockdown in place, the abortion pills, mifeprisitine and misoprostol are said to be hard to come by, so the procedure is very expensive and only those that have forex can afford it. The options only get riskier. It will have to be the coat hangers, the traditional herbs and all the other gory unthinkable stuff,” said Thembie.

Health experts are predicting higher numbers of unsafe abortions during the lockdown period as women won’t be able to travel outside the country for sexual reproductive health services.

In an interview, the parliamentary portfolio committee chairperson on health and sexual reproduction health rights defender Dr Ruth Labode said the closure of borders was putting the lives of many women at risk as some would opt for dangerous backyard abortion methods.

“Abortion services are desperately needed. Women are on lock down but it does not mean that they have stopped having sex. Many of them cannot access family planning services due to the lockdown regulations prevailing and they are at higher risk of having unwanted pregnancies. Yet the borders are closed women have been going to Zambia, south Africa and Mozambique for these services but right now, borders are closed and it means that women are left with fewer choices and most will resort to the deadly concoctions and ghastly methods of terminating pregnancies,” she said.

“It is high time as a country we relook into these issues. Going forward, we must make sure that we offer all the important services and during such abnormal situations, we implement policies and relax certain laws at least for that period, to avail unlimited access to sexual reproductive health services to women,” said Dr Labode.

In Zimbabwe nearly all abortions are clandestine and approximately 40 percent of them result in complications that lead to death.

While the exact number of women and girls who have died as a result of unsafe abortion is unknown, the director of family health services in the ministry of health and child care Dr Bernard Madzima in a recent interview revealed that unsafe abortions are one of the leading causes of maternal deaths in the country.

Dr Madzima said unsafe abortions were the fifth leading cause of pregnancy related deaths in Zimbabwe as they were to blame for 71 maternal deaths between January and April last year. The statistics for the same period this year are not yet available.

He said many women who undergo illegal abortions and suffer complications do not seek medical attention due to fear of persecution.

“Health professionals are not investigators and their job is to render health related services to the public. People must not fear to approach hospitals. We are having such high numbers of people dying because of such things. The high numbers are worrying,” said Dr Madzima.

The termination of pregnancy act in Zimbabwe only restricts legal abortions to cases of rape and incest survivors, if the condition of the expectant woman is at risk, or if the foetus is malformed such that it will not survive after birth.

The implementation of the law also presents a set of challenges, including multiple doctors’ appointments and delayed court processes.

For many women seeking a court order will be inviting prying eyes to their private lives, and the privacy offered by the illegal but thriving unsafe abortion ‘clinics’ in the country will be the viable option.

A study by the ministry of health and child care in collaboration with a New York based research centre, the Guttmacher Institute found that over 65 000 illegal abortions were performed in 2016, and the number could be higher as many may have gone unreported.

Zimbabwe has one of the highest pregnancy related deaths in Africa, while some SADC countries are relaxing laws on termination of pregnancy, Zimbabwe still has not changed its stance and women have had to cross the borders for survives, while those who cannot afford have had to leave it all to fate and seek services in the dungeons.

Having such high abortion related maternal deaths numbers at a time when borders are open and people can seek health services elsewhere, the thoughts of what lays ahead for Zimbabwean women seeking abortion services during the lockdown sends chills down one’s spine.

Fortunate Muzarabani is a journalist from Zimbabwe This story is part of the GL News service , Gender and COVID 19 news series.