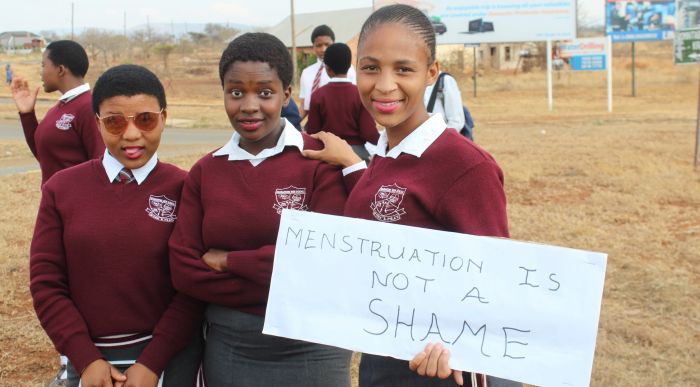 28 May : Ulemu Kupakasa wanted to give up her aspiration of being the vice president of student’s union in a certain higher education institution in Malawi because of the shame, stigma and ridicule she endured. Being the first time for the school to have a woman vying for the position, men used all sorts of tactics to pull her down to the extent that one of them said that she can n ot bbe the Vice President because she “menstruates”.

Kupakasa says during the campaign trail she was subjected to emotional abuse as people linked her leadership capabilities with menstruation.

“I was demotivated and ashamed by comments from the opponent group claiming that I cannot be the school’s Vice President simply because I am female and I menstruate hence the limitation. They regard menstruation as a form of weakness rather than a biological function such as breathing,” says Kupakasa.

Students at the university proved the opponent group wrong by voting for her and now she is the Vice President of the students union.

But the 2018 UNFPA report – Menstrual Health Management in East and Southern Africa – notes that stigma and ridicule that women and girls face due to menstruation contribute to their exclusion from school and other opportunities – perpetuating gender inequality and violence against women.

Taboos associated with menstruation remain a human rights concern worldwide as menstruation is perceived as unclean, embarrassing, inhibiting and something that cannot be discussed in public hence keeping women and girls away from other activities such as cooking and attending other social and religious activities – compromising the needs and rights of all people who menstruate.

“The negative comments are unfortunate in as far as gender equality is concerned because they are deliberately linking one’s leadership capabilities to menstruation. With several legal instruments on the table aimed at ending discrimination against women, we should be moving away from looking at leadership qualities based on one’s sex, whether or not one is male or female. We need to look at qualities and capabilities of the person to lead us neither their sex nor their gender,” says Mateyu.

She warns that comments like these are a threat to the realisation of the needs of women in all spheres “because women can shun to contest in these positions for fear of being harassed.”

“Inclusion of women is important because we cannot expect men to decide and tackle issues affecting women. Majority of people who experience Gender Based Violence in universities are female students; we hear a lot of issues to do with Sexually Transmitted Grades (STGs). So, we need them to be in the forefront and deal will issues concerning the welfare of all female students,” Mateyu hinted.

According to Mateyu CEWAG is implementing several projects targeting adolescent girls in order to demystify stigma that comes with menstruation.

“Social stigma in regards to menstruation is a long-standing issue and mostly a woman is looked at as dirty, unclean and impure when menstruating. If you add poverty to it where girls and women do not have proper menstrual facilities, running water and sanitary pads things get worse and the issue of uncleanliness which has been talked about is more physical in nature rather than just imaginary social stigma,” says Mateyu.

Mateyu says there is also a need to create dialogue and teach boys and men issues to do with menstruation and gender.

“To build a more equal and just society we need to educate men and boys to view monthly periods as a natural process not a weakness or a limitation,” she said.

Echoing Mateyu’s sentiments, Sexual and Reproductive Health Rights (SHRH) trainer and champion for Sex Rights Africa Network, James Mamalira says inclusion of women in students’ unions matters most because it is one way of mentoring them into leadership in the society adding such comments are more colonized, repugnant and a misleading patriarchal mindset.

“When we talk of achieving gender equality at national level, platforms like these are crucial because it’s where women are mentored into leadership in the society. They need to be in those positions to be mentored for their future endeavors in leadership. If they do not take these positions now, they will lack leadership skills which will affect them when they are out in the world to deliver, hence we cannot achieve the gender parity 50:50 campaign,” says Namalira.

He bemoans lack of open platforms to discuss menstruation from families to the entire community and inadequate menstrual hygiene products that force women to resort to rags as some of contributing factors of menstrual induced social stigma.

“Families and communities do not discuss issues of menstruation due to patriarchal mindset that labels discussing menstruation as a taboo. And when discussed people use nonverbal communication. Sanitary pads are also expensive and women resort to unsafe locally available resources during menstruation which translate menstrual management as dirty and need secrecy hence the social stigma,” says Namalira.

Malawi Girls Guide Association (MAGGA), a voluntary Non-Governmental Organization in Malawi for girls and women says that comments like these are misleading and inappropriate and there is a need to break the silence on menstruation because it is perpetuating gender inequality.

“Let’s stop discussing issues to do with menstruation under closed doors as it allows negative myths to proliferate that usually leave girls less confident about their bodies,” says executive director for MAGGA, Mphatso Baluwa Jim.

Jim says her organization is implementing several projects aimed at empowering girls and young women to stand up and advocate their rights including SRHR, promoting positive parenting and social norms that fight inequalities.

“Menstruation is part of being a woman and should not be a taboo subject. Families and communities should create spaces where these issues can be discussed openly and give young women a chance to negotiate safe, hygienic and dignified monthly period hence ending the stigma,” added Jim.

Jenipher Changwanda is a Malawian journalist and Ziliro Mchulu is practicing feminist writer in  Malawi. This story is part of the GL News Service

It’s sad when women are sidelined due to cultural beliefs. It is a gracious act for a girl to stand up for the truth regardless of the cultural affiliation and ethics which surrounds us.Its high time we stand up and implement the methods which portray equality among boys and girls. Which then is better between menstruating and contacting an STI or even getting unwanted pregnancy.Sex is a basic need and we need to be smart!

Particularly in the rural settings where the majority of people; men and women are illiterate, the role of a woman is played down to merely managing the kitchen. Full stop!

That a woman is equally able and can do even more than a man is still a far fetched dream. Menstruation is just part of womanhood but has literally nothing to do woman leadership capabilities.

Let’s indeed wise up and stop the stigma!