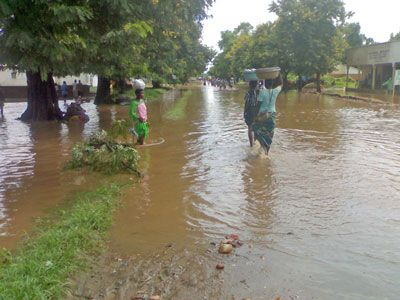 Lilongwe, 28 January: President Peter Mutharika declared Malawi a disaster zone earlier this month after floods hit 15 of the country’s 28 districts, leaving more than 200 people dead or missing, and displacing 174 000 people across the country. Malawi’s Department of Disaster Management Affairs says 638 000 people have been affected, while Oxfam’s Situation Report indicates that, although data on victims has not yet been desegregated, women and children have been disproportionately affected by the foods. In all camps, women and girls greatly outnumber boys and men.

Charity Manyela, a flood victim now staying at a temporary relief camp in the Mulanje District, says that signs of another downpour are bitter sweet. “When it rains, I don’t have to worry about going through the tedious process of purifying unclean and muddy water. But what if it rains heavily again and we get displaced from here [the camp]?”

The 28-year-old mother of three says when it doesn’t rain, she has to wake up as early as 4:00am to fetch water from shallow wells because all the boreholes have become silted. Furthermore, because sewage drains are blocked and ablution facilities have been destroyed, there is a high risk of water contamination and even a Cholera outbreak.

Since the water is unsafe, boiling it is the only way of purifying it, especially in the absence of water purification tablets. Manyela then has to walk long distances to collect dry firewood, which is very difficult to find. Floods like these not only kill people but they kill and stifle access to other resources and crops needed for survival.

Government and international donors must recognise the central role played by women, whose responsibilities, as a result of the gender division of labour, include subsistence and food production, household energy and water needs. Women greatly depend on natural resources and the environment.

It is undeniable that women and girls have and will continue to be disproportionately affected by floods and other natural disasters. Thus, the ongoing disaster response must adequately address the specific needs of women and girls, especially those who head households. A gender responsive approach is crucial to enhance the nation’s recovery from this disaster.

Whilst provision of food, clothing and shelter tops the aid agenda, a major concern is the safety of women and girls in the relief camps. There have already been reports of men taking advantage of and sexually abusing women and girls. In times of disaster and desperation, women are also often vulnerable, easily coerced or forced into exchanging sex for aid. This emphasises the need for government and disaster relief to put in place measures to guarantee women and girls’ safety.

In order to do this effectively there is a need for sex disaggregated data on those affected. It has been more than two weeks since the floods hit the country, and only a few camps have recorded how many men and women are using the temporary shelters.

A ‘one-size-fits-all’ disaster management is simply not gender responsive. It is the responsibility of the Department of Disaster Management Affairs to mainstream gender in practice and to ensure data desegregation, to guarantee all citizens’ needs are met. As pressure mounts for government to adopt the Disaster Risk Management Policy, which has been in draft form for over six years, focused pressure must be channelled toward ensuring the policy is revised and gender is mainstreamed throughout the document.

Both NGOs and government must ensure all interventions are gender responsive and that the many women like Charity Manyela are not left out of progress plans. This will only stall the nation’s recovery by exacerbating women’s vulnerability and plunging the country into deeper poverty. As the international development agenda nears finalisation, leaders of Malawi, Southern Africa and the globe, must commit to gender concerns in national budgets with specific regard to climate change. The needs and role of women must be firmly placed into the plans for climate change and sustainable development.

Daud Kayisi is the Media & Communications Coordinator at Oxfam- Malawi. This article is part of the Gender Links News Service, offering fresh views on everyday news.

2 thoughts on “Malawi: Flood relief must be gender responsive”

Is the process of engendering the draft Disaster Risk Policy for Malawi finalised?

It’s time to have specific local gender differentiated disaster impacts in all of the 15 districts.