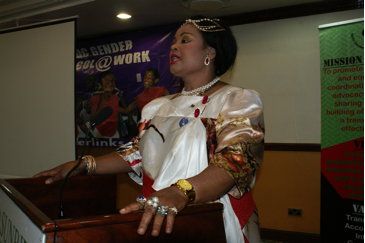 Blantyre, 8 June: The Government of Malawi has applauded Non Governmental Organisations for the positive and significant roles they play in promoting gender equality and women empowerment in Malawi and the SADC region.

Speaking on Wednesday at Mount Soche Sunbird Hotel in Blantyre during the award presentation ceremony to mark the end of the 2015 SADC Gender Protocol Summit for Malawi, Minister of Gender, Children, Disability and Social Welfare, Patricia Kaliati observed that the NGOs have helped to empower women in several areas.

“….through the Ministry of Gender, Children, Disability and Social Welfare, in collaboration with civil society organizations such as the NGO Gender Coordination Network, women are able to participate in development and demand social and economic services for their welfare”, she observed.

She also urged the Civil Society to remain vigilant in fighting towards gender equality.

“You have endured a lot in your fight for gender equality and urge you to keep on fighting.” Said Kaliati.

She pointed out the need for synergy building and continued collaboration among all stakeholders to ensure greater impact in the quest for gender equality and women empowerment. In this regard, she called on all duty bearers to engage in effective advocacy and lobbying to change domestic legal structures and ensure that enough resources are allocated towards gender and women empowerment.

“Coordination between Government and NGOs should be strengthened to achieve gender equality”, said Patricia Kaliati, Minister of Gender Children, Disability and Social Welfare during the closing of the Malawi 2015 SADC Gender Protocol Summit, the 3rd June, 2015.

Kaliati reiterated government commitment to gender equality by pointing out positive strides that have been made at national and regional levels since the protocol was signed, citing examples of women empowerment initiatives in the Ministry. However, she lamented the slow progress in some sectors such as women economic empowerment especially with regard to access to productive resources.

She observed that although efforts have been made towards gender equality the stark reality is that Malawi will not achieve 28 targets set by SADC member states because of several factors including some women who deliberately derail the progress of those who are holding various leadership roles.

The Minister of Gender called for a holistic and coordinated effort to implement national, regional and international frameworks that promote gender equality. This she advised requires stakeholders to look at how to link ongoing processes to existing realities and find ways to strengthen them.

Speaking on behalf of non-governmental organisation in Malawi, the Chairperson of the NGO Board, Emily Banda expressed concern over some Non Governmental Organisation that operating illegally. She observed that unregistered NGOs undermine efforts and initiatives for promoting gender equality in Malawi especially when they form cliques that oppose the mainstream gender movement at domestic and international levels.

“We know that there are some non registered organisations receive a lot of money from donors but they use it for personal gain. About 328 organisations operate illegally. We are aware and we close you down if you do not register within the stipulated period” declared Banda.

“Illegal NGOs are neither transparent nor accountable,” Emily Banda, Chairperson of the Non-Governmental Organisations Board in Malawi

Presenting the Malawi Barometer on Gender, the Chairperson for Non Government Organisation, Gender Coordinating Network, Emma Kaliya pointed out that although efforts have been made towards gender equality the stark reality is that Malawi will not attain the targets set in the SADC Gender and development Protocol by the end of this year. Statistical evidence she cited included the a low retention rate for girls attending primary school education, high child marriage, high rates of HIV and AIDS infection, and high maternal mortality rate. She also expressed concern that women’s political participation is now reduced to 16% in Parliament and 11% at local council.

Notwithstanding the daunting challenges the gender equality campaign is facing, Kaliya thanked the Malawi government on the efforts it is taking towards the realisation of gender equality and women empowerment in Malawi and the SADC region. She also recognised the efforts by development partner for financial and technical assistance rendered towards gender equality initiatives.
To realise the goal of gender equality beyond 2015, Kaliya called for improved coordination in decision-making, planning, implementation, resource mobilization, monitoring and evaluation, and on accountability and transparency. She praised the partnership obtaining among SADC members states, development partners and the Southern African Gender Protocol Alliance in giving women: voice, choice and control through global, regional and national development frameworks.