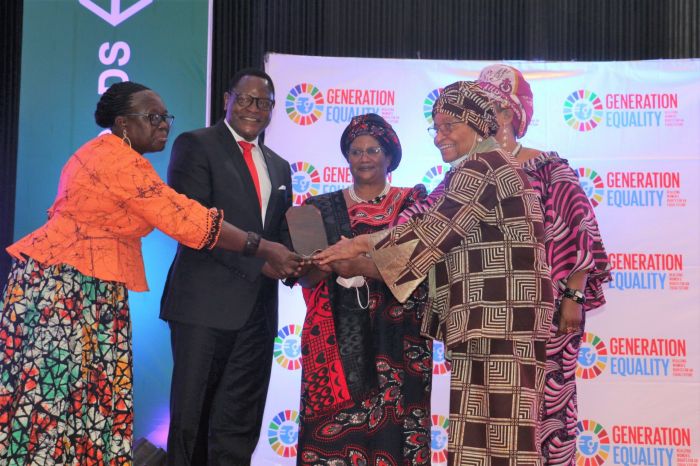 Lilongwe, 8 April 2022 – The President of Malawi, Lazarus Chakwera has announced his  commitment to champion the election of 50 percent women legislators in Parliament as a stepping stone toward the promotion of women empowerment and gender equality. Currently, the 193-seat Malawi Parliament has 23% percent women representation according to the Women’s Political Participation Africa Barometer published by Gender Links and International IDEA.

Speaking in Lilongwe on April 7 during a three-day High Level Intergenerational Dialogue on Generation Equality and Women’s Leadership in Africa, President Chakwera said he would implement what he pledged during the run up to the June 23 2020 presidential election on promotion, expansion and protection of civic space to help women attain leadership positions and that the targets set are attainable.

Chakwera, a United Nations’ He-For-She Campaign champion, said Malawi is leading in the promotion of feminist movements and leadership alongside Canada and the Netherlands. Eight months ago, Malawi was chosen at a Global Gender Equality Forum to champion the cause.

“I will do everything I can to champion the election of women to not less than half of the seats in Parliament during the next election. It can be done. This can be achieved,” Chakwera said.

He said the fight against inequality would continue regardless of achievements that have been recorded so far. In 2020 the president came under fire for failing to appoint more women in his maiden Cabinet which fell short of the 60:40 representation of either gender as provided in the Gender Equality Act. However, Chakwera’s current 32-member Cabinet has complied with Section 11 (1) of the Gender Equality Act 2013 as the 12 women he appointed represent 40 percent.

Chakwera added that: “I pledged to increase women’s economic empowerment by transforming the care economy; expand decent work and employment in formal and informal economies; increase women’s access to – and control over – productive resources, and lastly – to promote gender-transformative economies and fiscal stimulus.”

Former Liberian president, Ellen Johnson Sirleaf, who attended the Lilongwe conference said it was inspiring that women were breaking barriers holding key positions in different sectors of the economy. She however, cautioned that challenges still stand in the way of women to achieve equality.

“It’s time to bring equity to women,” she said asking Chakwera to do more to achieve the much-needed 50 percent representation of women in all sectors of the economy.

Former Malawian president Joyce Banda said there was need for women first to attain economic empowerment, which would act as a catalyst for them to hold political and key decision-making positions in government and the private sector.

“There are many women who can make good leaders but are failing to do so because men are at ana advantaged position when it comes to financial resources,” she said.

The conference brought together former heads of state and high-profile female delegates from different international organisations, was held under the theme ‘Growing and Glowing Against All Odds’.

*Joseph Kayira is a journalist from Malawi. This article is part of the Gender Links News Service.