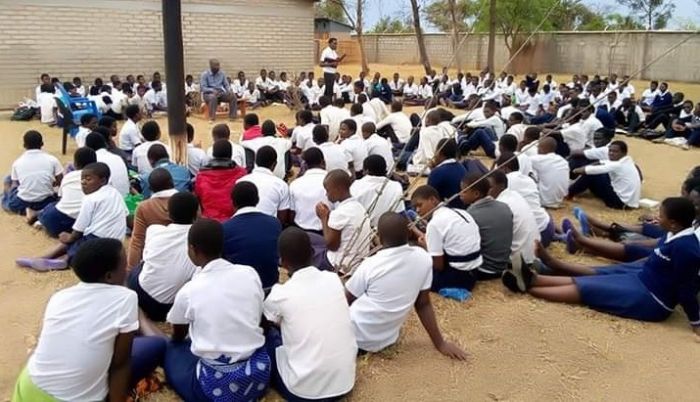 Lilongwe, 27 December: Malawi is one of the least developed countries in the world, and the country may continue to find it hard to extract herself from the gut-wrenching poverty if nothing tangible is done to deal with the perennial scourge of early pregnancy and marriage among female students.

Officials from the NGO sector, academicians, and students are currently sounding public and expert opinion on whether Malawi’s efforts to deal with the problem are bearing any tangible fruits.

These concerns are coming hot on the heels of the 2017/18 Education Sector Performance Report which indicates that the country’s dropout rate continues on  its downward trend, with the dropout rates for female students persistently remaining much higher than the rates of male students.

While the major drivers of the dropouts include lack of fees, long distances, family responsibilities, sickness, and poor facilities, pregnancy and early marriage have been singled out as the major drivers.

According to the 2017/18 Education Sector Performance Report, between 2010 and 2017, 30, 000 female students dropped out of secondary school in Malawi. That’s about 11 students dropping out of school every day.

While the introduction of the new policy of free secondary school education is expected to ease the problem, people are advancing various views on the country’s capability to deal with the issue of early pregnancy and marriage.

“As Family Rights, Elderly and Child Protection (FRECHIP), we are very disappointed to learn that at least 11 girls have been dropping out of secondary school daily due to either marriage or pregnancy,” Retired Child Justice Magistrate, Esmire Tembenu, now Executive Director of an organisation called Family Rights, Elderly, and Child Protection says.

She says it is sad to note that, despite the many interventions made to protect the girl child from sexual abuse, the number of girls dropping out of school is on the increase. “Eleven female students dropping out of school every day is on the higher side. We strongly believe that it’s high time Malawi as a country start thinking of constructing as many boarding secondary schools for girls as possible as opposed to self-boarding and walking long distances to school,” Tembenu says.

The idea of constructing more boarding secondary schools for girls has the support 19-year-old Sipiwe Banda, herself a victim of early pregnancy, who maintains that girls who are doing self-boarding usual fall prey to men who coax them with money. “For example, in my case I got pregnant while I was in form two in 2016 after a certain man whom I barely knew promised to be supporting me financially. I had to accept because I was facing a lot of challenges as a self-boarder coming from a very poor family,” Sipiwe says.

“We also need to continue offering life skills education to these secondary school girls, because more often the focus is on primary schools only forgetting that these secondary school girls also need life skills education in family planning and sexual reproductive health,” Thomas says. Most commentators agree that education offers the poor the route to a better life. Moreover, for people like Sipiwe, who is now just staying at home because she cannot afford school fees, poverty could be transitory if they are given a chance to back to school.

Evidence from diverse settings confirms that even after taking count of other factors such as household land holdings and other assets, education as all levels reduces the chance of people living in chronic poverty. “It is my dream that could continue with education so that one day I will be able to support my mother and young brother,” Sipiwe, whose father died a while back, says.

“I know that education reduces poverty by increasing people’s income and it enables those in paid formal employment earn higher wages, and offers better livelihood for those who work in urban informal sector or in rural areas.” Tembenu agrees that education prevents the transmission of poverty between generations.

“Economic empowerment of parents and guardians is another alternative because poverty is another factor that is driving young girls into early marriages as well as having sexual relationships to top up whatever their disadvantaged parents have provided to them,” Tembenu says. She also says that law enforcers should be imposing stiff punishment on men who sexually abuse young girls through rape, defilement or marriage.

“We understand that there are some parents who force the young girls into marriage so that they enjoy the gifts from the men who marry the girls. Our stand as a family rights organisation is that Malawi should establish Care and Protection Centres or Gazette as many foster homes so that victimized girls of early marriage or any type of sexual abuse should be removed from any undesirable home and be fostered for protection.”

Tembenu also proposes prosecution family members and men who do the practice. “We are proposing this because, experience has shown that law enforcement is becoming a challenge because in most cases, the abusers are the sole bread winners and guardians of the young girls,” Tembenu says.

The Retired Child Justice Magistrate maintains that marrying young girls is one of the forms of gender-based violence because young girls who are married go through all the types of abuses for instance physical, sexual, economic and emotional abuses. “The law, in particular section 81 of the Child Care Protection and Justice Act, offers protection of children from forced marriage or betrothal whereas section 22 of the newly-amended constitution bars any person below the age of 18 from entering into marriage. In my opinion, this means that any child has no right to marry.”

Trizah Titus, herself a victim of gender-based violence, says to win this war, both girls and boys need to be provided with sound education. “Investing in equitable education for both girls and boys can help poor countries like Malawi achieve the kind of growth that banishes poverty,” she says.

Her sentiments are in line with the Malawi Growth and Development Strategy (MGDS) 3 which clearly indicates that an educated and skilled population will help Malawi achieve economic growth and the SGDs.

Malawi needs to improve its transition rate from primary to secondary and from secondary to tertiary level education.

As of 2017, only 16% of children transition from primary to secondary school, and of those, only 8% move on to tertiary education.

According to the Malawi Growth and Development Strategy (MGDS) 3, one of the strategies of improving the country’s education and skills development is to construct and expand secondary school physical infrastructure that are disability and gender sensitive, and provide bursaries and cash transfer to disadvantaged learners.

Indeed, many citizens have been wondering how Malawi could wage and win war against gut-wrenching poverty when she is failing to deal with the issue of early pregnancy and marriage currently haunting the country.

Winston Mwale is a journalist from Malawi. This article is part of the Gender Links News Service #VoiceandChoiceCampaign