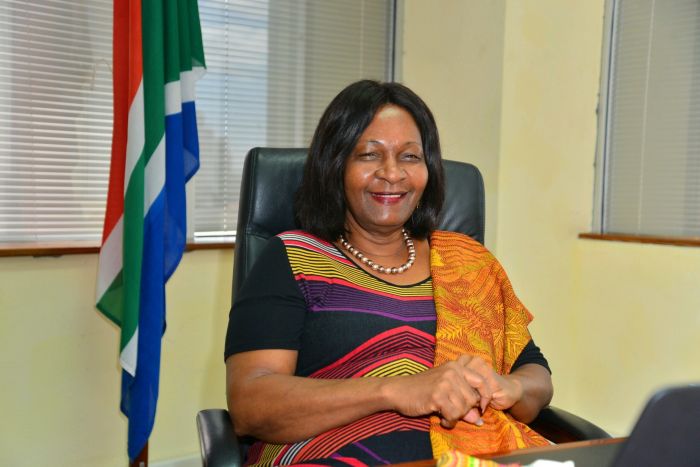 Mauritius: A rich journey of empowerment

“The numbers do not represent equality and the focus should be on the quality of the equality”.

Her Excellency Dr Hlamalani Nelly Manzini is the High Commissioner of the Republic of South Africa (SA) in Mauritius since February 2020. She was invited as a guest speaker for the launch of the 50/50 campaign which aims at advancing gender equality and youth inclusion in the Republic of Mauritius in September 2021. In her speech at the launch of the campaign, Dr Manzini elaborated on how “the numbers do not represent equality and how the focus should be on the quality of the equality”.

As a woman activist, she became interested in the work of Gender Links (GL). She describes her experience with GL as very good: the staff were welcoming and there was clear correspondence prior to meeting face-to-face. All relevant information about the campaign was provided to her and this ensured that she was well-prepared to interact with the rest of the audience.

Dr Manzini’s rich academic journey reflects her dedication and perseverance. She studied on her own and completed her PhD alongside handling her personal and professional commitments. She started her primary schooling under a tree. She then skipped certain grades as she had already gained knowledge and exposure via combined classes. She completed her secondary education partly in a bus rearranged as a classroom. Thereafter, her father passed away and she could not study medicine as she originally intended to. Due to financial constraints following her father’s death, Dr Manzini trained as a nurse and earned a stipend. Yet, her determination did not waver; she promised herself that come rain or shine, she would become a doctor one day. As a community nurse, she was given the opportunity to understand more about public health. Consequently, she pursued her studies in public health and epidemiology and obtained her PhD.

Dr Manzini hails from a traditional leadership background where succession passes on to the first-born son. The constitution of South Africa was being worked on around the same time that Dr Manzini’s father passed away. The constitution provided importantly for the equality clause. Being the middle child of a family with five sisters, Dr Manzini and her sisters were the first to test the equality clause by allowing her eldest sister to be the successor in her family. It was a difficult battle and they fought for it up until the level of the Constitutional Court. They won and today Dr Manzini’s eldest sister is still a chief. Dr Manzini and her sisters even made headlines across South Africa and internationally for this huge achievement.

Besides this personal achievement, Dr Manzini’s professional pathway is characterized by powerful initiatives which illustrates her commitment to women and youth empowerment. Describing herself as an all-rounder, Dr Manzini started off as a nurse and then became a community nurse. Thereafter, she became the Head of the Department of Health and Social Development. Subsequently, she became the Director General of the Limpopo Provincial Administration. From being in a hospital, to taking care of an area as a manager, to taking care of the health of the entire province and to finally being a general manager of all departments including health, agriculture, economic development amongst others, she describes her journey as challenging but very enriching.

Being part of the public service in South Africa, Dr Manzini was running quite a number of public service projects in line with the strategic objectives of the government of SA. During her time as Director General of Limpopo Provincial Administration, she set up a programme on women leadership, where periodically, women public servants can sit together and share the challenges they face in their respective positions. Those who need support are identified and then the on-the-job mentorship programme is implemented. The programme on women leadership was a resounding success; by the time she left as Director General, there were six departments out of 11 headed by women and all these women were participants in the leadership programme. The nine provinces across South Africa usually shared their experiences of how they were performing. The Limpopo Provincial Administration was acknowledged during this process for the number of women in leadership positions.

Following her tenure as Director General, Dr Manzini found herself heading a state-owned enterprise called ‘Independent Development Trust’. This institution was participating in the social development of the people of South Africa. The government would entrust the institution with construction projects to undertake. She ended up overseeing the construction of a High Court at the cost of 1.2 billion Rand, from laying the first brick to the final building. She has learnt from the transition of being a general manager to managing a construction space. In addition, the Government had the confidence to give her large-scale projects. It was painful to leave the province but she was happy to enter the world of construction where she obtained new knowledge and experience.

Dr Manzini did not cater only for her own empowerment. South Africa has a grading system of constructors where Grade One implies someone that can be given a project for 100,000 Rand and the highest one is Grade Five, involving projects of 500 million Rand. While she was in charge, Dr Manzini employed female contractors by beginning to give them smaller projects and then bigger projects. When she left that position, there were three women holding a Grade Five in construction and they were doing very well. She pushed those women until they reached the highest grade and invited experienced people to assist these women.

When asked about the challenges during her professional career, Dr Manzini asserts that challenges were there. When bidding for construction, one must come up with a proposal including the costing for everything. In some instances, one can run short of money and must ask for more money from the government along with justifications. All eyes were on women handling major projects. While Dr Manzini was busy promoting and motivating these women, men were simultaneously laughing at them and demotivating them. Initially, the women wanted to disappear into thin air; through motivation and having supportive men who are pro-women progress, they gained the strength and today they are still standing strong.

In addition, Dr Manzini was also appointed as the Chairperson of the Risk Management Committee in Foreign Affairs. The committee assessed the way the department is performing. The main challenges were that the department used to get negative audit reports and the people posted out as ambassadors were almost always old and male, thereby promoting gender inequality. The then Minister of Foreign Affairs was a woman who worked with Dr Manzini in Limpopo Province and was very supportive of her ‘Women in Leadership’ initiative. It was the Minister’s idea to get young people into the diplomatic area and thus she initiated a program of diplomatic cadets where the later obtained training and were then posted. Dr Manzini fully supported this program and claims that the program has changed the complexion of diplomats: “we now have young people who are confident and capable to run a mission”. She is confident that in a few years, some of these young people will be Heads of Missions.

With regards to her personal life experiences, Dr Manzini was widowed at the age of 26, with three children, two of whom are disabled. She carved a rich professional pathway despite her personal and family responsibilities, with the support of her late mother. Her late mother looked after her children along with helpers when she had to travel in pursuit of her career. When one is widowed at that age, Dr Manzini describes that there really are only two options: the first one is to sit down and cry or the second one is to stand up, go and fight to ensure one’s children’s safety. She chose the second option. She supported her youngest daughter and today she has become a paediatric cardiologist. Besides all the things she has done for institutions or countries, Dr Manzini is glad that she has something back home to hold dear. She is proud of the person her daughter has become today. Despite all the people’s comments, she decided firmly that she would focus on her children and this paid off.

In terms of her future plans, Dr Manzini wants simple things – for instance, to share her experiences about being a widow and about her diplomatic journey from being a nurse to a diplomat and representing one’s country. She believes that there are plenty of opportunities in the world and that young people need not feel stuck. People can indeed seize opportunities that come their way and make the most of their time and their potential.

Comment on Mauritius: A rich journey of empowerment Cancel reply