News Mau: Are we doing enough to eliminate discriminati... 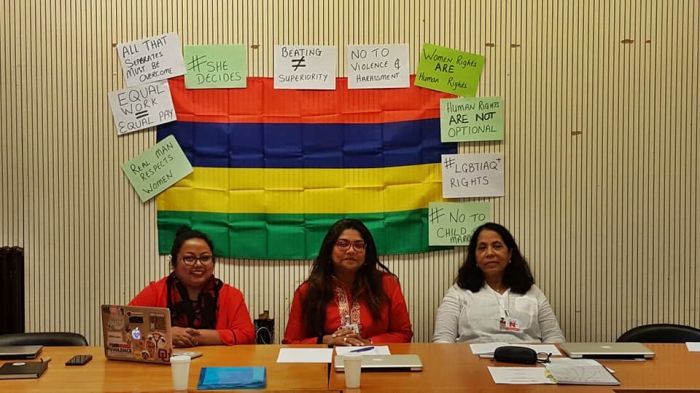 Port Louis, 28 March:  Mauritius ratified the Convention on the Elimination of All forms of Discrimination against Women (CEDAW) in 1984. In the recent concluding observations of the CEDAW Committee which was in 2018, the State of Mauritius was called to take numerous actions in respect of human rights and to ensure gender equality by overcoming social, cultural and legal inequalities. Practices of child marriage, lack of policies to address discrimination against lesbian, bisexual, transgender and intersex women, increase in Gender Based Violence (GBV) specifically domestic and sexual violence, lack of clear regulations to ensure effective implementation of the new provisions on abortion amongst others were some of the concerns of the CEDAW Committee.

While the Committee proposed solutions to address the challenges and emerging issues, positive comments were also received for the amendment and enactment of legislations including the Protection of Domestic Violence Act (Amended in 2016), The Protection of Human Rights Act (Amended in 2012), the Independent Police Complaints Commission Act (Amended in 2016), The Criminal Code Act (Amended in 2012), The Equal Opportunities Act and The Local Government Act of 2011. The Committee highlighted that these legislations represent the commitment of the State to address gender issues and end discrimination. Amendment of the 6 legislations indeed demonstrated progress. Moreover, locally the setting up of a High Level Committee (HLC) to end Gender Based Violence chaired by the Prime Ministry and accompanied by a National Strategy and Action Plan (2020-2024) with a cost estimate of Rs 137,250,000 undeniably shows the commitment to address GBV and pertaining inequalities while at the same time, it demonstrates the severity of this social issue in a small island like Mauritius.

It is worthwhile to note that in 2018, Gender Links, Young Queer Alliance, Media Watch Organisation and SOS Femmes, 4 NGOs in Mauritius collectively presented a Shadow Report to the CEDAW. The document highlighted the intersectional disadvantages faced by women in Mauritius. Likewise, various NGOs in Mauritius including the Kolektif Drwa Imin (KDI) advocacy projects supported and financed by the Kaleidoscope Trust have been lobbying for amendments in legislations which are still discriminatory against women and other vulnerable groups. The implementation of the Children’s Act 2020, for instance, which bans child marriage equally demonstrate the hard work and advocacy of civil society organisations and political will to ensure the protection of children in Mauritius. In addition, further amendments to the Protection from Domestic Violence Act (PDVA) was announced by the Ministry of Gender Equality and Family Welfare on International Women’s Day 2022. The KDI presented a report highlighting on various recommendations for the PDVA, ICT Act, Civil Code and Penal Code in 2022.

It is clear that civil society organisations are leading advocates for gender equality while recognising the urgent need to ‘act now’ and curb down social issues. With the rising rate of violence against women with 2245 reported cases of domestic violence in 2020 only at the level of the Gender Ministry and 293 reported cases in just 18 days during April 2021 lockdown, 4 women killed in March 2022 there is an urgent need to review the PDVA. The Gender Equality Bill on the other hand should be non-binary as per the propositions set by the KDI. There is a further call from civil society organisations to Gender Ministry and the High Level Committee to organise consultation sessions as set in the National Strategy and Action Plan (2020-2024) for inputs and recommendations on the proposed Gender Equality Bill.

This article was first published by Kaleidoscope International Trust

Sheistah Bundhoo-Deenoo is an advocate for gender equality in Mauritius. Sheistah is the Senior Programmes and Finance Officer at Gender Links and also a member of Kolektif Drwa Imin.

Comment on Mau: Are we doing enough to eliminate discrimination Cancel reply