News Mauritius: A Quota system for Women in Politics... 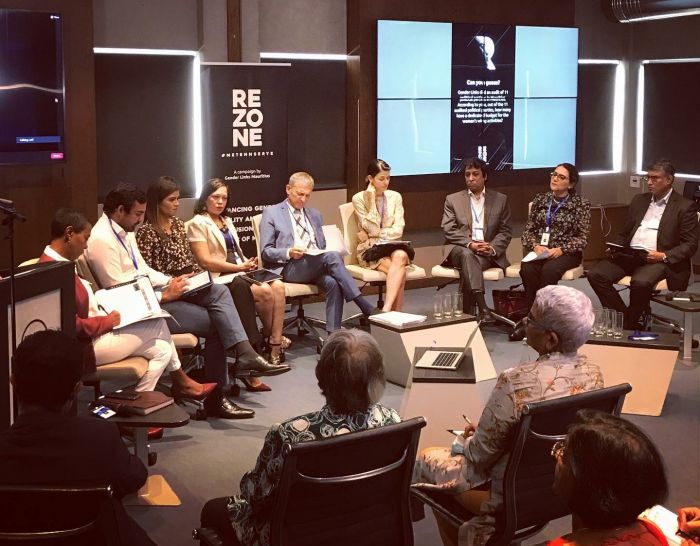 Mauritius: A Quota system for Women in Politics

Moka, 18 May: A quota system in Mauritius will be a roadmap to ensure women’s political participation. This summarises the main output of the 50-50 symposium organised by Gender Links Mauritius with financial support from the European union. The symposium sought to discuss and analyse Women’s PoliticaL Participation (WPP) and the need for a 50-50 quota in Mauritius.

For years, political power has remained in the hands of men and with the absence of women in the political arena, the concerns, needs and issues of women do not comprehensively emerge out of decision making forums. The glass ceiling remains a barrier for women’s achievement of upper level positions in politics. The chances for a diversified pool of competence, improved decision making process and broader perspective of socio-economic issues are limited with a lack of female representation.

With only 3 women ministers out of 24 and the share of female cabinet ministers standing at only 12.5% in 2020 , Mauritius is lagging behind the creation of equitable space for women in politics. Mauritius has a lot to learn from Rwanda, which is the country with the highest percentage of women in parliament representing 61.3% and South Africa with 46%.

The advocacy here is not to outnumber men in politics but to rather create an inclusive space at decision-making level where both men and women can actively participate and make their voices heard. This parity can be achieved with the introduction of a quota system. The case of Rwanda represents the success of having set a quota system for women’s representation in politics. Same applies for South Africa, Namibia and Mozambique where voluntary quotas has impacted positively on WPP.

With the introduction of quotas, affirmative action will prevail and thereby contribute towards the elimination of challenges preventing women to enter the political sphere. Some countries characterise quotas as a ‘symbolic policy’ which does not entail institutional changes but rather represents a solution for the demand of gender parity in politics. Moreover, studies also prove that a PR system is “good for inclusion” and the chance of women getting elected is even higher when the PR system works in concert with a quota. Therefore, the forthcoming question which arises is that should we focus on voluntary party quotas or legal quotas in the Mauritian context?

Research demonstrates that it can take years to achieve parity in politics. For instance, it took almost 60 years for Denmark, Norway, and Sweden to exceed the 20% threshold, and 70 years to reach 30% female representation in parliament. Mauritius, being a small island state is definitely incomparable to the listed countries but this brings us to reflect on the time frame and the necessity to come up with immediate measures to address the enlarging gap of women in politics. Therefore, it is clear that legal quota is the answer.

By putting forward a legal quota, political parties will be mandated and obliged to follow the regulation. The introduction of a 50-50 quota is imperative in the current political context of Mauritius. This quota system will address the existing gaps and emerge as an inclusive and just measure whereby all political parties filling candidates for the national elections should present a list composing of 50% women and 50% men. The quota system will work in the Mauritian context because it has yield positive results in the local government context. The enactment of the Local Government Act 2011 by former Minister Louis Herve Aimee created space for more women to enter politics with the introduction of a quota. As such, the Local Government Act requires at least 30% of either sex to be candidates on all party lists and the positive results of the act was clearly depicted in the 2012 local elections with an increase of women representation from 6% to 26%. Therefore, legal quota is the immediate yet short term solution.

Deep rooted patriarchal ideologies still rule in Mauritius and this represents a major obstacle for women to join politics. Women are associated with the bulk of domestic responsibilities; sexist remarks and actions from male counterparts in the political world further reinforces discrimination. The introduction of the 50-50 quota will not only allow more women to stand as candidate but will also increase the chances of women being elected. Research showcase that women have better chances of being elected in the PR and closed list system as voters’ main focus is on the political party ideologies, policies and programmes rather than the individual candidate .

While it remains a fact that legal quotas will not directly address deeper internal and structural reforms, it remains a pathway to increase the numbers of women in politics. Women in politics will then challenge the cultural and structural discriminatory practices and break the semiotic violence which is engraved in Mauritian politics. It is primordial that voter’s education and capacity building prevail after the enactment of the legal quota to sustain the results. Securing a “critical mass” does represent a fast track but coupled with training in politics; qualified female politicians and competence will preside. Therefore, alongside a quota system, there is also a need to extend lobbying strategies to include regular training for women candidates, putting forward effective mechanisms to financially support women candidates, providing support for organising campaigns and managing relations with the media. Is Mauritius ready to take this step?

Sheistah Bundhoo-Deenoo is the Senior Programmes and Finance Officer at Gender Links Mauritius.

This article is part of the discussions of the 50-50 symposium organised by GL Mauritius supported by EU Mauritius. Under the “Advancing Gender Equality and Youth Inclusion” project in the Republic of Mauritius.

4 thoughts on “Mauritius: A Quota system for Women in Politics”

In my opinion, we should look at bringing about the fundamental change in the mindset of Mauritians to gradually shift from a patriarchal society to one that values women more. This will concurrently lead to a greater participation of women at decision making level.

Thank you for sharing your thoughts. Indeed we also need to look at bringing the fundamental change in regards to mindset. The quota system, voter’s education, capacity building and sensitisation therefore all work together to bring that positive change.

I don’t agree on quota system because it erode the confidence of women as well as men are thinking women are part of the tea, only to fulfill the requirments. Empowering women should go beyond number or equal share like their influence in decision making or the possibility of hearing their voice should be increase. Their productivity and quality achievement should be measured and accepted by both male and female.

I don’t agree on quota system because it erode the confidence of women as well as men are thinking women are part of the team, only to fulfill the requirments. Empowering women should go beyond number or equal share like their influence in decision making or the possibility of hearing their voice should be increase. Their productivity and quality achievement should be measured and accepted by both male and female.

Comment on Mauritius: A Quota system for Women in Politics Cancel reply