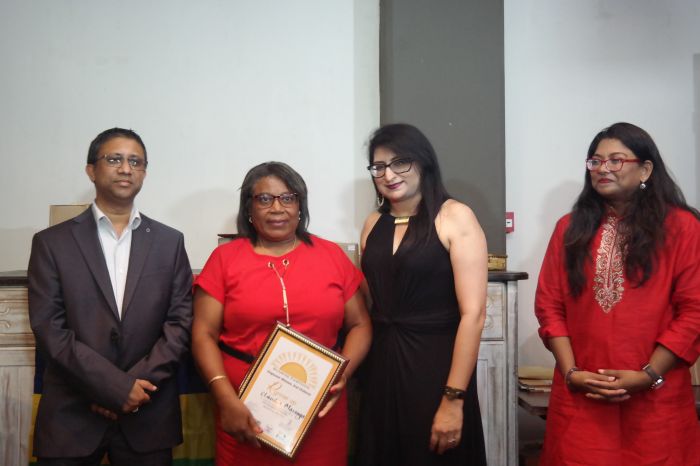 2 June, Bagatelle: The Gender Links Voice and Choice Mauritius Summit which culminated in a grand price giving ceremony Saturday night at Flying Dodo in Bagatelle, has crowned 14 official winners. There was a general joyful feeling that each and every participant won in terms of friendship, exchanges and networking.

Before the announcement of the winners, Anushka Virahsawmy, Gender Links Mauritius director, reminded all the people present that this Summit which took place over two days is not just a summit but a platform to bring people having common goals together, to help the participants understand where they are and in what direction they are heading to and how the non- governmental organisations, local authorities and entrepreneurs can work together.

She also underlined the importance of doing monitoring and evaluation of projects to means to sustain their organisations specially when it is getting more difficult to get funding as a middle income country. She congratulated the entrepreneurs whose work has been supervised by Gender Links (GL) and who since then have been able to grow as individuals and expand their small businesses. She thanked the European Union for being a regular sponsor of GL.

The members of the jury who could make it to the evening were asked to give a feedback on the entries so that the participants would learn about the strengths and weaknesses in their presentations.

For the Media Category, Christina Chan Meetoo, Principal Lecturer in Media and Communication at the University of Mauritius, said she had seen a lot of efforts from the participants to go beyond business as usual even though all the participants did not rise to all the asked criteria. She said that some journalists had revealed during their presentation that they had experienced some opposition from their editors in publishing articles on subjects judged trivial like the menstruation and the cost of sanitary pads or even about the issues concerning the Lesbian, Gay, Bisexual, Transsexual (LGBT). But nevertheless, they managed to do their reports and articles on these subjects.

“We had to score the presentations and it broke our hearts to have to choose only one winner. But we had to do it. We also gave subject ideas to the participants”. She asked the journalists to persevere and to look for exact information and statistics. “Often in journalism, what is missing is statistics. The human stories are important but the figures too”. Christina Chan Meetoo added that even if there is only one winner in the Media Category, every participant should continue the work started because “this work is going to change the way people look at women, at gender issues and will bring a change of mindset in society’’. She has praised GL for giving visibility to the media. “Usually, it is the media who gives visibility to others and nobody thinks about them. GL has to be praised for doing so for the media”.

Loga Virahsawmy, former director of the francophone office of GL, who launched the GL Centre of Excellence in Local Government in Mauritius, was a judge in the Local Government, Youth and Drivers of Change Categories. She said that it was a great pleasure for her to reconnect with some of the women which whom she had worked in the past. “But you have never stopped being in my heart”, she said. In the Local Government Category, Loga Virahsawmy found the presentations interesting and said she was impressed by the one presentation done by two young girls for the Local Government category. “They were not looking at their Powerpoint, nor at their paper. They spoke with natural ease. These youngsters represent our future”. One or two presentations were disappointing, she said, because they lacked statistics and budgeting. “My criticism to municipalities and district councils is that they were not explicit enough about budgeting and this is regrettable because local government should deal with bread and butter issues, about the daily preoccupations of people.”

Loga Virahsawmy expressed her admiration for the presentations in the Youth Category. “They presented it with all their hearts and what is admirable is that they even questioned themselves. It is the first time that I am witnessing this and I believe they are right to do their own criticism because otherwise, they will not progress. We should all take them as models and do the same”.

The category where the members of the jury had a hard time to choose the winner, she said, was the Drivers of Change one. “The presentations had it all, facts, figures, the changes they brought about in society. These are leaders who make us believe in the future of our country, in NGO’s and in government’s work. Some of them would be great politicians if they wanted to. Even if we had a tough time to choose a winner, all the participants in that category are winners”.

Danny Philippe was asked to step in when a member of the jury in the NGO Category had to leave, echoed what Loga Virahsawmy said. “All the projects presented by the NGO were excellent and it was not an easy task to choose the winner. Even though all the participants in that category did not win, they should continue the good work which is so necessary for Mauritius”. Girty Eleonore, Citizens’ Advice Bureau Coordinator at the Prime Minister’s Office who was also a jury in the NGO Category, said that he has had a long career as a public official and he has noted that many of the projects implemented by government and which have transformed the lives of the population, have been suggested by NGO’s. He gave as example the Needles Exchange Program. “If a public official had asked his Minister to implement this program, the Minister would not have listened to him. The NGO’s have worked on this project and have kept on pushing this agenda in front of the Minister and at last, the government has accepted it and launched it. This is the way to do things.” He said that the jury has seen creativity and a lot of resourcefulness in the projects presented. “The other important fact is policy making. NGO’s have the potential to challenge the government and the laws and this is how change will happen. This type of work should be replicated”.

Nesha Ramen- Mootoocurpen who was a judge in the Entrepreneurs Category said that all the 11 projects presented were great. “I have been a member of the jury in that category for three years now and I have noted their progress. They all started from scratch and nowadays, they have a sustainable business. One woman started with a hen and now she has a small catering business, another one started doing bags and has so much creativity that her bags can compete with those sold in branded shops”. Irfan Shah Riyaad Joomun, who was also a judge in the Entrepreneurs Category, said that he was impressed how these women who came from a difficult and often violent background had gained confidence in themselves once they were supported by GL and how they had brought about changes in their homes and had turned the slogan Yes we can into reality.

The winners announced during the evening are as follows:

After the grand evening, Anushka Virahsawmy voiced out her pure joy of the results and feels that a great deal of the winners’ projects which are fully sustainable and can be replicated at the national level and even regional one. She said that she has organised many summits and each one was different. “When we are talking about gender equality, gender policy in the COE and elsewhere, we must put an end to the ticking boxes syndrome. We must think about sustainability because there are big problems in Mauritius, namely synthetic drugs. Many young people want to help and bring solutions and we in GL are there to encourage them and give them support so that they can continue the good work started. I feel blessed and hopeful that participants will look at their work differently after this Summit”.

For more information and interviewa on this summit contact Anushka Virahsawmy and Sheistah Bundhoo on the following telephone numbers Tel: 4373960/ 57709846 or email maumanager@genderlinks.org.za