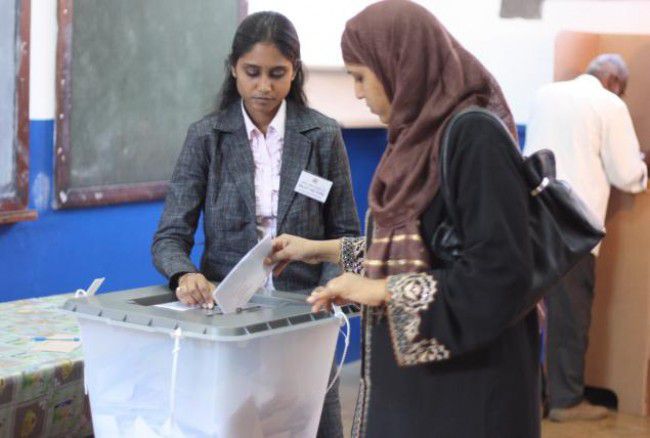 Port Louis, 23 September: The poem Rime of the Ancient Mariner by Samuel Taylor Coleridge reads, “Water, water everywhere. Nor any drop to drink.” These words ring all too true when one reflects on the current turmoil and persistent gender inequality we are witnessing in Mauritius. Women are represented almost everywhere in various public and private sectors, but remain invisible at the negotiation tables of political parties.

The two major political parties the Labour Party (LP) and the Mouvement Militant Mauricien (MMM) have formed an alliance. At their joint press conference on this past Saturday, there was not one mention of gender in their nine priorities officially announced by both leaders, Dr. Navin Ramgoolam and Paul Berenger. Only when Mauritians see the party list for the general elections, will they know if the LP/MMM Alliance slogan, “Un peuple uni, Un pays moderne (A united nation, a modern country) will become a reality.

Each party has agreed to field 30 candidates (60) in all constituencies of Mauritius and to post 12 ministers each. However, they failed to mention how many women they will field as candidates or as ministers. Mauritius is in a sorry state with only 18.8% women in Parliament and a mere 8% women in Cabinet-the lowest in the SADC region. Positioning women as Speakers, Deputy Speakers or Chief Whips is a mere charade of political will and commitment to gender equality. We are not fooled, these are not decision-making positions.

With the general elections looming, Mauritians and the media are scrutinising the political arena. Radio Plus broadcasts a daily programme on the upcoming elections, while the print media publish daily articles and weekly interviews on politics. But, all this political discourse is saturated with subliminal forms of sexism and discrimination against women. Up to now not a single politician, expert, “politologue” (political analyst) or political activist have mentioned the word “woman”, let alone discussed women candidates in the next elections. The word “woman” is seemingly missing from the vocabulary of those claiming to advance “un people uni” (A united nation). Curious, considering 51% of the people making up this nation are women.

On 24 March this year, Prime Minister Dr. Navin Ramgoolam presented the White Paper on Modernising the Electoral System, which demonstrated the highest level of political commitment to gender equality. The Paper highlights the fact that parliamentary representation for women rose modestly from just 5.7% in 1983 to 17.1% in 2005 to 18.8% in 2010. In the presentation the Prime Minister said, “We are now in 2014. The hopes and aspirations of our people also include those of one half of our population who have historically been under-represented in our National Assembly and whose potential contribution to our political culture and society is not being maximised – women.”

In their submission, Modernising the Electoral System from a gender perspective, sent to the Prime Minister, Gender Links and the SADC Gender Protocol Alliance argues that Mauritius needs to seize this historic opportunity by 1) opting for the highest proportion of PR seats in any new mixed electoral system and 2) increase the ratio in the gender neutral quota from one third of either sex to half of either sex (50/50). Sadly the Paper will only go to Parliament after the next elections, thus a more gender equal political sphere may only be achieved following the 2020 General Election.

As we count down to the 2015 deadline of the SADC Gender Protocol, Mauritius is at a unique crossroads, with both the implementation of quotas for women in the New Local Government Act adopted in 2012 and lessons learnt from other SADC countries. Mauritius saw a fourfold increase of women in local government from 6.4% to 26% in the December 2012 local elections following the adoption of special measures. Although Mauritius has not yet signed the Protocol, the country signed its predecessor, the SADC Declaration on Gender and Development in 1997, which like the Protocol called on member states to ensure equal representation of women and men in the decision-making at all levels.

The time is now for political parties to heed this commitment and advance the progress made at the local level to the national level. Gender Links trained women politicians to stand as candidates. Many of them are ready to take up the challenge. If our political parties are so confident about how many seats they will win, they should field women to be elected. Women councillors like Meera Ramgutty, Priscilla Bignoux and Nirmala Mohur, to name a few, are changing lives in their communities. Why not give them a chance change lives at the national level?

Politics should be by the people and for the people. More than half these people are women. Only when political parties show real commitment to gender equality can Mauritius claim to be the model of democracy in the Southern African region. There is no democracy without equal representation of women.

Loga Virahsawmy is the former Gender Links Francophone Director and now sits on the GL Board. This article is part of the Gender links News Service, offering fresh views on everyday news.