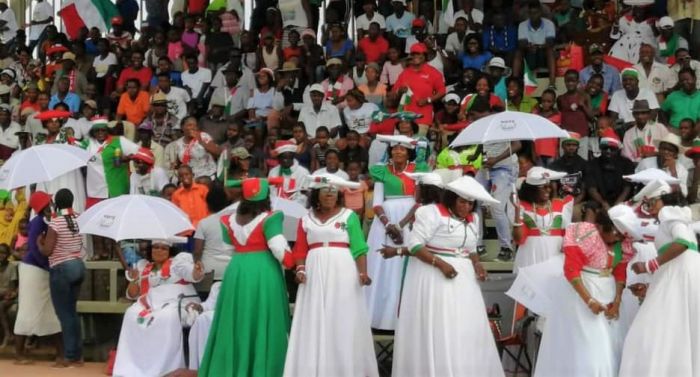 Windhoek, 31 March: Women now constitute 46% of Namibia’s parliament, up by six percentage points from before the November elections. Namibia and South Africa are now tied for the highest representation of women in parliament in the Southern African Development Community (SADC).

“Although we would have loved to see Namibia becoming the first country in SADC to achieve women’s equal representation in parliament, we applaud the progress made,” noted GL Chair Emily Brown.

The final tally in Namibia follows the announcement of presidential appointments during the inauguration of Hage Geingob earlier this month, just before the closure of most flights and airports in SADC due to the corona virus pandemic.

President Geingob also announced 21 cabinet ministers, 38% of whom are women (up from 28 percent in the last cabinet). An analysis of Namibia’s newly appointed cabinet indicates that women are now leading some of the traditionally male dominated ministries such as international relations, trade, education, justice and the presidency.

Women comprise 71% of the deputy ministers announced. Among these is the dynamic 23-year-old Deputy Minister of Information and Communication Technology Emma Theofilus.

Esther Utjiua Muinjangue, the woman opposition leader of the National Unity Democratic Organisation (NUDO) failed in her bid for the Presidency, but has been made Deputy Minister of Health and Social Services.

“It is great to see so much diversity in parliament and cabinet,” noted Namibia Country Facilitator Fabian Sampaya. “This bodes well for our democracy.”

Namibia has a unicameral (i.e. single house) parliamentary system. There are 96 elected MP’s and eight nominated MPs. Namibia has a Proportional Representation (PR) electoral system. The ruling South West African Peoples Organisation has a fifty percent quota for women who are interspersed in party lists using the “zebra principle” of one man, one woman.

Women comprise 44 (or 46 percent) of elected MPs in the current parliament. If President Geingob had nominated all women to parliament, they would have constituted 52 representatives or 50% of the total. However, in keeping with the fifty-fifty principle the President nominated four women and four men. Thus women constitute 48 out of 104 members of parliament, or 46% of the total.

Five political parties had 50% or more representation of women amongst the elected candidates. These are SWAPO (52%), Landless People’s Movement (LPM) – 50%, National Unity Democratic Organisation (NUDO) – 50%, Republican Party of Namibia (RP) – 50% and United Democratic front of Namibia (UDF) – 50%. SWAPO garnered 63 seats in parliament, down from 77 seats in the 2014 elections.

GLN commends most political parties for embracing gender equality in their manifestos although there is room for improvement through voluntary and legislated quotas for women’s representation. The November 2019 elections witnessed a 61% (826,198) voter turnout from 1,358,468 registered voters. Women comprised 53% and youth 52% of the voters. The country used the Electronic Voting Machines (EVM) for the second time in elections.