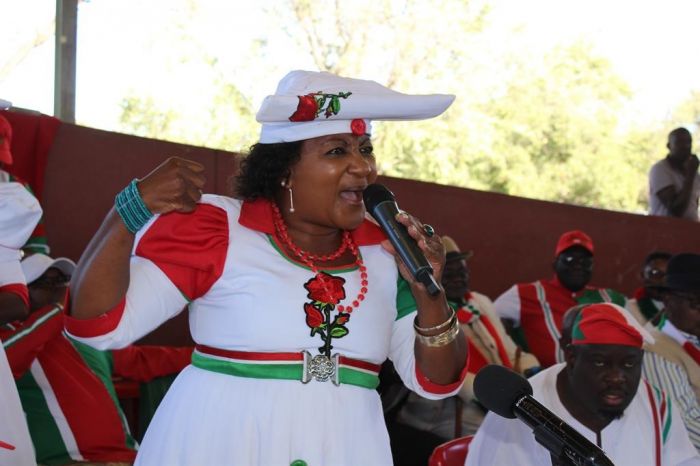 Namibia, 26 November: As the votes come in from Namibia’s elections yesterday, women’s representation in parliament is likely to increase from 40% to 43% according to predictions by Gender Links Namibia (GLN). This will place Namibia second after South Africa in the Southern African Development Community (SADC), and add to pressure for a legislated quota ahead of the 2024 elections.

Elections in Namibia both at national and local level are run on the basis of Proportional Representation (PR) or list system. Each party puts up a list of candidates in rank order, and these get seats according to the proportion of seats that the party wins. Article 23 of the Constitution encourages women to be enabled to play a full, equal and effective role in the political, social, economic and cultural life.

While there is no constitutional or legislative quota, the ruling South West Africa People’s Organisation (SWAPO) has a 50% one woman, one man (or “zebra” quota) in parliament.

GLN commends SWAPO for meeting the gender parity targets of the SADC Protocol on Gender and Development by fielding more women candidates (51%) compared to the 49% male candidates.

GLN applauds NUDO for having a female Presidential candidate, Esther Muinjangue. SWAPO has 60% women in the party’s top five leadership positions. There is an independent male Presidential candidate, Panduleni Itula, for the first time in Namibia’s post-independence history. He has proven to be popular amongst the smaller opposition political parties.

GLN predicts that SWAPO’s  popularity will drop from the 80% in 2014 elections to 70% in 2019 due to governance issues within the party.  SWAPO’s zebra list is likely to place 37 women in parliament. The second most popular party, PDM is likely to get about 10% of the vote in these highly contested elections. GLN calculations show that women’s representation in parliament will increase from 40% to 43% when the results are announced in the next few days.

“More than half of the political parties have adopted gender equality principles in their 2019 manifestos. This is indeed a step in the right direction for Namibia to achieve global, continental, regional and national gender instrument targets. This is a hot race for political power and no party wants to be associated with leaving women behind in political decision-making,” says Fabian Sampaya, GLN Country Manager.

For example, the All People’s Party (APP) commits to ‘stand for gender equality advocate for a 50/50 decision-making structure in our life time; advocate for 50/50 gender representation for minister and their deputies; advocate for a 50/50 gender representation on management position of all state-owned enterprises (SOEs)’. The Popular Democratic Movement (PDM) commits to financially empower rural woman and formulate a woman in workforce guide to inform policies.

GLN urges other political parties to adopt a zebra style list for candidates like SWAPO to ensure that women have equal chances of winning the elections. We also urge the political parties to consider adopting voluntary quotas for women to increase their chances of leadership in the political field. GLN further urges the Namibian parliament to implement the motion adopted just before the elections for a legislated 50/50 quota at both national and local level. Presently there is a legislated 30% quota at the local level only.

GLN applauds Namibia for an election campaign, which is free from violence. This has indeed encouraged more women to participate in political decision-making. Namibia has a best practice to share with the rest of the Southern African Development Community (SADC) on increasing women’s representation in politics.

We call on some political parties to increase women’s representation in top leadership positions to enable them to have a voice in decision-making. GLN and other stakeholders will contribute towards improving participation of women in all levels of governance.

For more information on gender and elections in Namibia contact Fabian Sampaya on +264 812398645 or email nammanager@genderlinks.org.za

One thought on “Namibia: Women MPs set to increase in elections underway”

I wish this was the status quo even in other countries in Africa. Job well done Namibia because even at party level, it’s very difficult in some countries.In addition, if this could move even to religious congregations it could be a great move. We still have peoplewho still think women are incapable especially in churches. The suprising thing is that we have more women than men in whichever setup. This entails that change of mindset especially in women should occur otherwise, we are fighting a loosing battle. Let us learn to support each other especially where we see there’s potential. Thanks Namibia, Bravo!