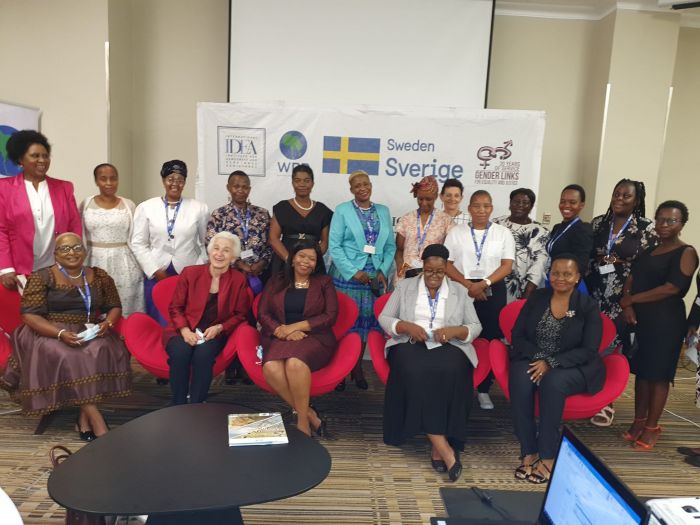 Gaborone, 19 April: Botswana is currently undertaking consultations on whether its 55 year-old Constitution should be reviewed. This has given Batswana an opportunity to push aggressively towards gender equality more than ever.

The Constitution review information gathering process being done through community meetings across the country provides a platform to lobby for the formulation of deliberate measures to empower women.

President Mokgweetsi Masisi  appointed 19 Commissioners into the Presidential Commission of Inquiry. Eleven Commissioners (58%) are men, and eight (42%) are women. They  are currently traversing the country to hear what Batswana want to be included or removed from the Botswana Constitution.

This Presidential Commission of Inquiry or Dibotelo Commission, is looking into whether the Constitution of Botswana should be reviewed. It seeks to identify the strengths and weaknesses of the Constitution; assess its adequacy including the promotion of equality; articulate peoples’ concerns as regards the amendments that may be required for a review of the Constitution and conduct inquiries to obtain information from sources that the Commission considers relevant in the execution of its mandate. The Commission will make recommendations to the President and will submit a report at the end of September 2022.

Consultations on the Constitutional review began in early February and are expected to end in July this year.

Permanent Secretary in the Ministry of Presidential Affairs  who is also head of Secretariat of the Commission of Inquiry Pearl Ramokoka said  by 23 March 2022 that they had covered 31 villages and towns out of an expected 131. She noted that gender balance is one of the recurring issues that Batswana raise during these consultations.

“In almost all villages, Batswana are speaking about under-represented groups such as women. They are really calling for gender balance and I believe it is one of the issues that will be looked into,” she said.

If all goes well and deliberate efforts are channelled  towards women’s empowerment, the new Botswana Constitution will provide for gender quotas for public elections.

The starting point to realise gender balance is ensuring that women are included in decision making processes in decision-making Parliament and the Executive arm.

In a recent  press statement following a two-day strategy meeting held in Botswana convened by Gender Links, representatives of the Alliance for Progressives, Botswana Congress Party, Botswana Democratic Party, Botswana Patriotic Front and Botswana National Front said the weak provisions for women’s rights in the current constitution are among the most pressing reasons for a review.

According to the Women’s Political Participation Africa Barometer published by Gender Links and International IDEA, Botswana at 11% has the least proportion of women in parliament compared to other countries in the Southern Africa Development Corporation (SADC) region. While women in local government are slightly higher at 18%.  In the region South Africa (46%) and Mozambique (42%) have the highest proportion of women in parliament. This is argued to be because of the electoral systems and quotas that influence women’s equal participation

Gender Links, a non-profit women’s rights organisation with the support of International Idea, through its Enhancing the Inclusion of Women in Political Participation in Africa project has conducted cross-generation academies with serving and aspiring women in politics over the last six months.  Participants have identified a range of discriminatory practices in the Constitution that Botswana inherited at independence in 1966Emang Basadi, a non-governmental, non-profit making, women’s rights organisation will be making their submissions to the commission soon. Emang Basadi president, Theresa Mmo lawa said they did their research after the last general elections in 2019.

One area that they will be firmly putting across is the need for  women funding in politics . “Government should sponsor political parties and then have a special dispensation for female politicians,” Mmolawa said.

“We have already started to speak about proportional representation during constitutional review meetings. We will be going to all districts to ensure that our voices are heard and taken into consideration,” she said.They are also consulting women on the need to speak without fear against male dominance. They advise that all women at the party branch level should continue fighting until the battle is won by involving the women residing in rural areas to also join in the fight.

Despite the efforts of opposition parties, it seems there is minimal participation in the constitution review process. Some opposition parties agree that gender balance is important but others are reluctant to attend meetings citing political reasons.Another issue picked is that almost all political parties have made gender balance a ‘Women War’, many of them when approached referred this publication to the women’s wing.

At the party level, women suffer inequality alone and are only recognised when a female candidate competes against a male politician from a different political party. Meanwhile, women do most of the campaign materials for men. They support men from primary elections all the way to the general elections and ensure that they win.

Botswana Patriot Front (BPF) women’s league chairperson Catherine Sepora said they have for long expressed concern about the low participation of women in politics.
“Our National Executive Committee (NEC) is well balanced that is why we became one
of the first to have a female party Secretary-General.

“We do not need to be given positions on a silver platter, no we want an environment where women can effectively compete against men,” she said. Meanwhile, Botswana Congress Party (BCP) said it will not be participating in the constitution review meetings. “I cannot tell on what we will be doing because our party has taken a stand not to participate. Yes, gender balance is a topic very close to us women however we believe there was no consultation by Masisi.”

“The constitution is clear on how the constitution review should be done and that has not
been the case. When we ask what Masisi is doing, we are told they are doing nothing. “They will come to us for consultation. What is this nothing that they are doing that is costinga lot of money? Are they wasting government money?” BCP women wing chairperson Tshimologo Dingake,  wondered. Botswana National Front (BNF) women wing leader Dorcus Mothusi said that they have been having meetings on the matter but have not made their submissions yet and will caucus to get an understanding of what they will say at the  Kgotla meetings.

Neo Kolantsho is a journalist from Botswana. This article first appeared in the Midweek Sun of 23 March and has been recast for the GL News Service . It is part of  Enhancing the Inclusion of Women in Political Participation in Africa project.