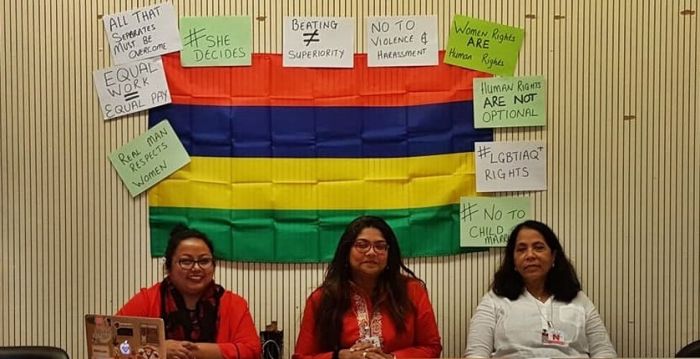 Anushka Virahsawmy, Country Manager at Gender Links Mauritius and Nargis Bundhun, Senior Counsel from Mauritius participated in the 71st session of the CEDAW committee held at the United Nations on the 29th of October 2018. This is the first time in the history of Mauritius that a Non-Governmental Organisation has taken to floor and presented a Shadow Report at the United Nations, CEDAW Committee. The Shadow Report consisted of the inputs of Gender Links Mauritius and local Mauritian NGOs namely Media Watch Organisation, SOS Femmes and Young Queer Alliance.

The Shadow Reported highlighted a lot on Child Marriage which is a major issue in Mauritius which is also in conflict with the Constitution. This is the main factor pertaining to the fact that Mauritius remains the only country which has not signed the SADC Gender Protocol.

The Oral Statement is as follows:

First Issue – Participation of women in politics – Mauritius is doing very badly on women in politics. There are only two female Ministers on a total of 23 Ministers as of date. The Local government Act, seeks to achieve gender neutrality by stipulates that at least one third of the candidates must be either women or men. Women are 52% of the population of Mauritius.

Sex is a subject, which is still a taboo in the Republic of Mauritius. Many young girls and boys do not have access to accurate information on their sexual and reproductive health.

As we speak, Lesbian, Bisexual Transgender (LBT) girls and women and the Queer community back home are struggling for their existence – homelessness, bullying, forced marriage, denial of their identities! Hate has never been so felt against people of the Queer community during this year’s cancelled Pride March followed by death threats where the perpetrators are yet to be held accountable. We have to get one thing straight: HUMAN RIGHTS ARE NOT OPTIONAL.

The Young female adults from Gender Links Halfway Home are all victims of emotional, sexual and physical violence and are struggling to find their place in society. They are not viewed as domestic violence cases and the halfway home does not get any help from the state for the young adults. Same applies to the handicapped people who cannot go to school or work as there are no infrastructural facilities for them.

We therefore urge you in supporting a responsive mechanism to include the marginalised community in Mauritius.

Forth Issue – Abortion and support

The Criminal Code was amended in 2012 to provide for the termination of pregnancy under four specific circumstances.

The state should stop the ticking the-box approach and look at both qualitative and quantitative data holistically. We also recommend that a strong evaluation and monitoring mechanism is put in place to show qualitative progress.

On the issue of Muslim religious marriage and child marriages:

The exception to the Non-discrimination Section (16) of the Mauritius Constitution remains.

The amendment of Section 16(4)(c), which provides for an exception to the non-discrimination provision in cases of personal status matters, has been an issue for this Committee since 2011. It has again been raised for the present review. To date, the Legislator has not announced whether it plans to proceed with any constitutional reform, nor has the Muslim Family Council made any recommendation and/or assessment regarding this amendment.

The Mauritian State has not codified a comprehensive personal status law, leaving Muslim women in religious marriages without legal recognition or rights.

Religious marriages are not subject to civil marriage laws, and courts do not rule consistently on issues such as custody and survival rights. This legal ambiguity increases inequality and further subordinates Muslim women in Mauritius.

The long-term security that legal rights can provide women is worth the uphill political battle of subjecting religious values to public and judicial scrutiny. This scrutiny holds religious communities accountable to Mauritian values of non-discrimination and freedom to practice religion, and to the Shari’ah values of equality and justice. The Mauritian State must strive to codify a comprehensive personal status law to protect women in Muslim religious marriages.

There is no minimum age for religious marriages, leaving young girls vulnerable to child marriages. The most recent example came to light in June 2018, when a 13 year old girl, who was married in a religious ceremony to a 19 year old man, died due to health complications while pregnant. Such tragedies cannot be permitted to continue.

The Civil Code allows children ages 16-18 to be married with consent of a parent or a judge. In 2014, there were 805 documented marriages of children aged 15-19 in Mauritius, the majority of whom were girls. Girls suffer disproportionately from child marriage, risking their health and educational opportunities. A clear ban of child marriage for children under the age of 18 is a critical step in protecting children and reducing discrimination against girls in Mauritius.

The State has to leverage its robust framework of diversity and inclusion:

Mauritius domestic violence legislation, with the amendments brought in the past years, is strong and caters for all situations, including the protection of children, and protection from in laws and opposite sex spouses (spouses receiving a very wide definition). Subject to interpretation, it can cover marital rape.

However, the following issues still prevail:

The State should take appropriate steps to enforce the law and bring the perpetrator to accountability whilst protecting the victims. It should provide adequate training and a clear framework to the enforcing authorities and law practitioners. It should also raise awareness societally, including disseminating the statute in the school curriculum.