Like HIV and AIDS, government needs to lead on gender violence

While President Jacob Zuma grabbled world headlines last week with his about turn on government’s HIV and AIDS policy, he has been conspicuous for his absence from the Sixteen Days of Activism that runs from 25 November (International Day of No Violence Against Women) to 10 December each year. Newspapers have been flooded with news of the fight against HIV and Aids under the banner “hope.À The same cannot be said about the fight against the twin scourge of gender violence.

Men and women with disabilities face many challenges in Southern Africa, especially related to discrimination and access to services. For many women, this also means that they face challenges when accessing health care services at one of the times when it is most important À“ when they are pregnant. 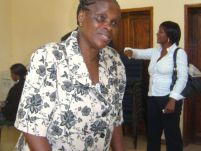 As we commemorate 16 Days of Activism, along with highlighting how extensive the problem still is, we also need to pause a moment to thank the people who work tirelessly 365 days a year to help and support survivors. Iriss Phiri, whose home in Lusaka’s Chilulu residential area is a haven for women fleeing violence, is one such person.

No longer scared in a house of my own

Marriage brings happiness to some, but for me it was a nightmare for twenty-five years. I stayed in an abusive marriage, enduring it, always hoping that what did not work out today, would tomorrow. It was my son’s sickness that ended it: a son who had been a breadwinner for my husband and me. Because it ended, I found happiness. Let me explain.

Standing together in the face of abandonement

My name is Mubayandi Kwiima.* I am 39-years-old and a mother of five. I’m the second wife in the polygamous marriage of three wives. I work as a clerk at one of the government ministries in Zambia.