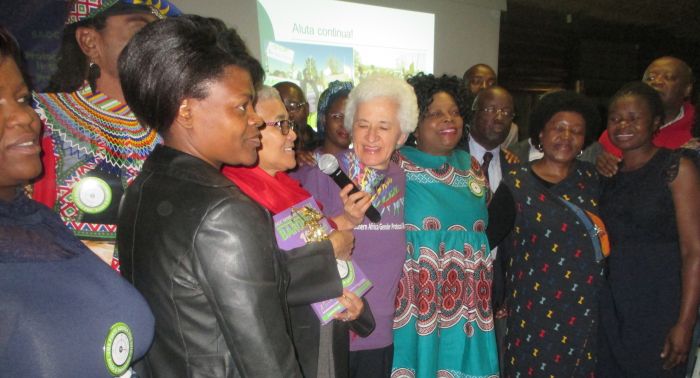 Windhoek 10 August: Gender activists from around the region will launch the tenth edition of the SADC Gender Protocol Barometer and the #SheDecidesSADC campaign at Hage Lodge on 13 August, ahead of the Heads of State Summit.

“For every step forward on gender equality we have witnessed a step backwards,” noted GL CEO and co-editor of the annual state-of- women in Southern Africa report. “In the year that saw women across the world and our region march for equality, our strong message is that it’s time for women to claim their space, and make their own decisions about their bodies, their work, their relationships and their lives.”

The Barometer uses two yardsticks: the empirical SADC Gender and Development Index (SGDI) and the perception based Citizen Score Card (CSC). The regional SGDI has in the past year gone down from 61% to 59% and the CSC from at 65% to 62%. At 63% and 71% for the SGDI and CSC, Namibia scores fifth out of the 15 SADC countries. Namibia, the new chair of SADC, received the Gender is My Agenda Campaign (GIMAC) Award in 2017 for its efforts to promote gender equality. One more SADC country needs to sign the updated Post 2015 SADC Gender Protocol for it to go into force. As the new chair of SADC, it is hoped that Namibia (which has still not signed) will do this.

Globally, the #SheDecides movement has drawn renewed focus to the imperative of enabling women, and particularly young women, to have control over their own sexual and reproductive health and wellbeing. The movement is galvanising support across the globe to Stand Up, Speak Out, Change the Rules and Unlock Resources. The Barometer launch will also coincide with the launch of the  #SheDecidesSouthernAfrica campaign.

At the local level 363 Centres of Excellence for Gender in Local Government councils are championing gender equality at the local level. Seven countries held SADC Protocol@work summits between November 2017 and June 2018, with Swaziland and South Africa holding a joint summit. These yielded 406 best practices on how the SADC Gender Protocol is being applied, especially at the local level.

The launch will take place on the eve of Women’s Day in South Africa – the commemoration of the the 1956 march of approximately 20 000 women to the Union Buildings in Pretoria to petition against the country’s pass laws that required South Africans defined as “black” under The Population Registration Act to carry an internal passport, known as a pass.

The Alliance is a coalition of gender networks in the fifteen SADC countries that campaigned for the adoption, ratification and revision of SADC Protocol on Gender and Development (Protocol).The Protocol is a unique sub-regional instrument that brings together the Sustainable Development Goals (SDGs), Africa Union (AU) Agenda 2063 and Beijing plus 20  and enhance these through specific targets.(For more information contact Lucia Makamure on alliance@genderlinks.org.za or Colleen Lowe Morna on 082-651-6995).