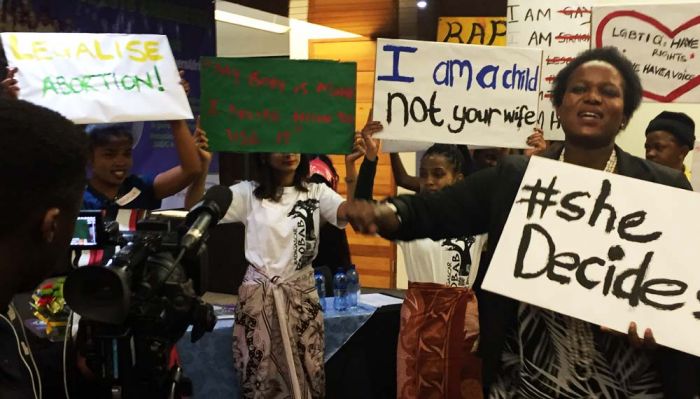 Johannesburg, 27 September 2018: On 28 September, International Day of Safe Abortion, organisations across the Southern African Development Community (SADC) will join hands to demand safe abortion for women as part of a broader “voice and choice” campaign.

The campaign includes a call for first hand stories (positive and negative) on abortion and online petitions calling for safe and legal abortion in 13 Southern African countries. An analysis of the petition will be presented to SADC senior officials and Ministers of Health when they meet in Windhoek, Namibia from 5 to 9 November to adopt the revised SADC SRHR Strategy 2019-2030 and its related score card.

The South Africa petition will ask women to provide their cell numbers. Gender Links and its partners will send out information to everyone who signed the petition on how to access abortion, their rights and recourse when their rights are violated.

Unwanted pregnancies have a profound effect on the lives of women and girls; their ability and right to make choices about their lives. According to the World Health Organisation (WHO), safe abortions are one of the safest and simplest medical procedures in existence. Yet abortion is mostly illegal and highly frowned upon in most Southern African countries. Unsafe abortion accounts for 10% to 13% of maternal mortality in the region. Safe and legal abortion is an urgent priority in Southern Africa.

In South Africa, despite strong pro-abortion laws, access to the service remains a challenge, with only 7% of the country’s health facilities providing abortions. Research shows that many health workers refuse to perform the procedure, with government unable to do anything about it. Information about where and how to acquire the service remains limited.

In Lesotho, government acknowledges the devastating effects of illegal backyard abortions on girls and women but still will not relent to make abortion legal in the country. Instead, it surreptitiously advises women to go across the border into South Africa where abortion is legal. The irony is not lost on human rights lawyer Lineo Tsikoane, who said: “They (Ministry of Health) know abortion is illegal, but they’re telling us to advise girls to go elsewhere, and [yet] won’t change our own law.”

While allowing for abortion in limited circumstances, Zimbabwe passed a law in 2012 that allows for post-abortion care. A much more cost-effective option would be to provide for safe abortion.

Many of the laws governing abortion in SADC are inherited from the colonial era and are out of sync with modern rights-based laws. For example, the Abortion and Sterilization Act 2 of 1975 in Namibia dates back to 1975. One of the few grounds for abortion is where “a woman has been deemed to be an idiot or an imbecile as per the Immorality Act of 1957, which makes sex with her illegal.”

On 24 February 2018, Angola’s parliament approved an amendment to the abortion law, making all abortions, without exception, illegal and punishable by between four to ten years’ imprisonment. In December 2017, Madagascar passed the Reproductive Health and Family Planning Law after many years of advocacy to revoke colonial policy that prohibited promotion of contraception. Abortion remains illegal in Madagascar under all circumstances, with virtually no exception.

Increasingly, women have turned to social media, in particular Facebook, to look for illegal abortion services. This can lead to serious complications and death if they receive the service from unqualified people and in unhygienic conditions.

The campaign will continue into the Sixteen Days of Activism between the 25 November and 10 December. Policy level meetings will take place in 13 countries develop a strategy to lobby for safe and legal abortion.

Countries in SADC could learn from the recent referendum on abortion in Ireland that despite its strong Catholic underpinnings resoundingly put rights above religion or morality. South Africa and Mozambique need to learn that choice without the services to make the choices is a violation of the Constitution. And rather than become a place of refuge for women seeking abortion from the region, South Africa has a duty to speak up and speak out for women’s rights, at home and in the region.

Click here to read more on the Safe Abortion campaign. Click here for the health chapter of the 2018 SADC Gender Barometer.