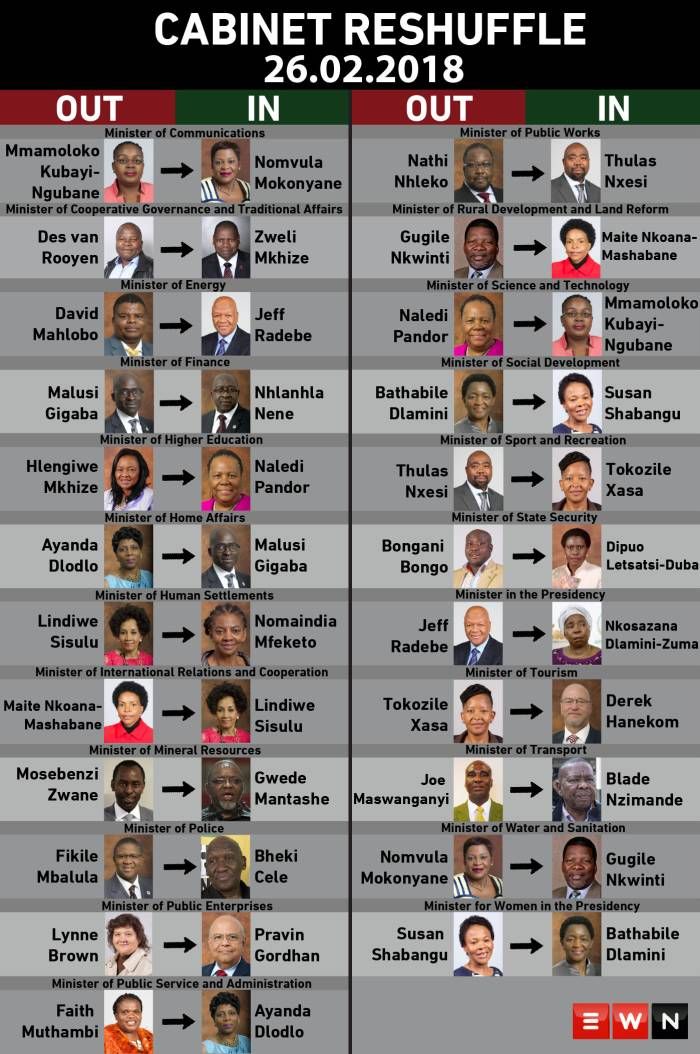 Johannesburg, 28 February:  While President Cyril Ramaphosa’s new cabinet has taken South Africa to within a whisper of gender parity at the executive level it has failed to inspire a new vision for gender equality, according to an analysis conducted by Gender Links.

In his own changes that involved 30 ministers and six deputy ministers (see Annex A below) Ramaphosa adhered strictly to the African National Congress (ANC) gender parity rule. When those who retained their posts are added to the mix, the percentage comes down to 46%. This is still higher than former President Jacob Zuma’s cabinets that hovered between 40% and 44% women in the course of his several reshuffles.

Unfortunately, according to the Gender Links analysis, “the emphasis continues to be on reshuffling rather than renewal.” The most glaring switch is the shift of Bathabile Dlamini from social development to the women’s ministry, formerly headed by Susan Shabangu, now minister of social development.

Dlamini came under fire for failing to usher in a new social grants distributor when the Cash Paymaster Services (CPS) contract ended. These grants play a crucial role in supporting women and families who remain on the fringes of the mainstream economy.

It took the intervention of the Constitutional Court, which permitted the extension of the contract with CPS for another 12 months, to provide a way forward concerning the payment of millions of beneficiaries on 1 April 2017. Dlamini’s role in the social grants crisis will be determined by a commission of inquiry, which began work on 22 January. She also oversaw the disastrous handling the Life Healthcare Esidimeni Scandal involved the deaths of 143 people  at psychiatric facilities in Gauteng from causes including starvation and neglect.

Ironically as Chair of the ANC Women’s League, Dlamini led the march for Ramaphosa’s rival, Nkosozana Dlamini Zuma to become South Africa’s first woman president. Sadly this only followed Zuma’s endorsement of her, and excluded other women who vied for the job.

“It is clear that Ramaphosa is playing ANC politics by retaining Dlamini in cabinet,” said GL CEO Colleen Lowe Morna. “The most generous interpretation of her retention is that as part of the restructuring still to come this ministry will be dropped altogether. But the message sent out now is the one that will be remembered. And that message is that women’s empowerment is so low on the list of priorities that the President is willing to sacrifice this ministry in the most cynical way out of political expediency.”

Although the appointment of Dlamini-Zuma to the planning portfolio is part of the pandering to various forces in the ANC, she has a far better track record than Dlamini as former minister of health, foreign affairs, home affairs and Chair of the African Union Commission.

At least four cabinet posts can be counted as gender benders – non- traditional posts that have gone to women. These include science and technology, sports and recreation, state security, defence and military veterans.  The appointment of the well respected former minister of Science and Technology Naledi Pandor to the ministry of higher education is also a gain. However, she had been touted as Deputy President, a post that has gone to David Mabuza, resulting again in two men at the top. “We held high hopes for Ramaphosa,” said Lowe-Morna. “The honeymoon was short lived.”     (See also https://genderlinks.org.za/news/cyril-purple-shall-govern/. For more information contact ceo@genderlinks.org.za)