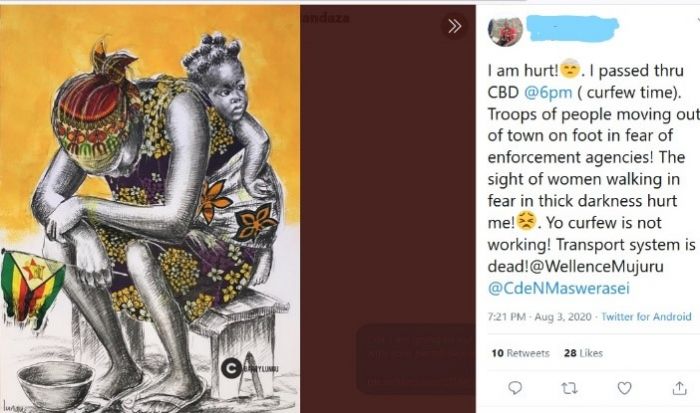 Harare, 7 September: The Corona Virus pandemic (COVID-19) has left most public services including health, water, refuse collection and transport in Zimbabwe barely functional. The shortage of public transport in most cities in Zimbabwe, especially the capital Harare has seen growing concerns over the transportation of individuals.

While the majority of citizens have been affected, women are mostly affected by this shortage of transport. Given the multiple roles that women have as caregivers, mothers and breadwinners the shortage of transport is most likely adding on to their burdens. The COVID-19 restrictions have seen women unable to access transport services as people are required to have letters for movement. As a result individuals including women and men have resorted to using private transport which is not readily available as informal public transport has been banned thus exacerbating the transport challenges in the country.

Again one wonders how safe people are when they resort to using other means of transport. There is a high possibility that people may contract and spread the virus as they are using private transport where many people are often seen bundled up in pick-up trucks, lorries and illegal ‘kombis’ disregarding all the COVID-19 safety precautions of physical distancing and sanitization. The only available mode of public transport, Zimbabwe United Passenger Company (ZUPCO) does not have enough capacity to ferry people to and from their destinations. Another challenge is that people have to wait long hours just to get a ride on the ZUPCO buses. This has different impacts on both women and men as most of their productive time is wasted whilst they are looking for transport either into town or going home.

In the absence of viable transport, increasingly women and men are forced to walk long distances to and from work. There is a high likelihood that people become targets of criminal activity including gender based violence. In the worst cases individuals, especially women, have been unable to get transport to get health services including access to contraception,  maternal health care and other health-related services.

While much emphasis has been put on the lack of transport in urban areas, it must also be noted women and girls living in rural areas have not been spared as there is no transport to commute to access health services and other basic services like banking.  Besides the shortage of transport, there are also restrictions prohibiting people from entering the Central Business District (CBD) without a letter confirming their employment status or letter from the local police stating your intentions for entering the central business district.

There have been calls from civil society and humanitarian organisations for the government to improve the transport delivery system. As schools are set to open soon with exam classes therein lies another problem that will need to be addressed. Social media is abuzz with individuals calling upon the government to address the transport challenge too.

As a country, we need to rethink our strategies vis-à-vis the availability of public transport. Entering into Public-Private Partnerships for the provision of a viable, efficient and cheap mode of public transport may be a panacea to the current transport challenges. With the use of technology, we may also want to create more platforms for payment of public transport modelled in the same fashion as the Tap Card currently in use on the ZUPCO platform.

There is also a need for a holistic approach to the transport problem both at the local and national level. While some private operators like VAYA Africa have been providing transport for essential service workers, it is neither sufficient nor cheap for the ordinary Zimbabwean.

One thought on “Public transport shortages putting many at risk”

Thank you for putting this out there.