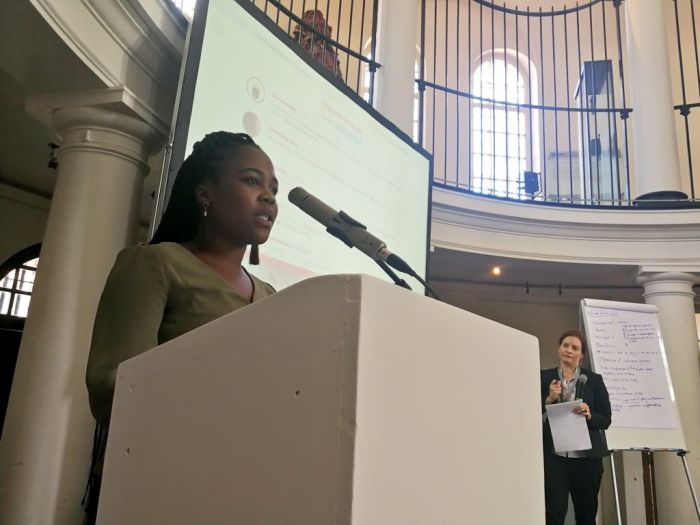 SA: Call for young women to mobilise on freedom day

Johannesburg, 27 April: As we celebrate freedom day young women must not make excuses for our lack of accountability in the spaces we occupy. Only through solidarity, a formation of sisterhood and community can we start making breakthroughs.

Sometimes the sacrifices we will have to make in this journey will come at a personal expense where we have to let go of certain things in our lives in order to see through justice to attain a state of Uhuru for young girls and women.

During this freedom month, the Nordic Embassies hosted a workshop at Constitutional Hill on Young Urban Women and Gender Based Violence. They are working on putting together a declaration to government to advance the rights of young urban women in this very violent and patriarchal society we live in.

This event gathered young adult urban women from different fields of political work and ordinary citizens. Such events create a platform of dismantling patriarchy and creating spaces where women can come together, organise and mobilise, for a way forward as we say “Enough is enough; we cannot breathe!”.

Young women at this event spoke about how to advance each other’s movements through mobilising but a huge sense of disdain around the word ‘mobilise’ was sparked. Among the questions asked was how women can mobilise against Gendered Based Violence (GBV) in the work place. The responses appeared as though the idea of protesting or gathering as a collective of women is seen as ‘disruption’ in a workplace environment and as an unorthodox means to fight oppression in the times, we live in. ­

With that said, many voices are better than one and sometimes the only way to disrupt the status quo is by physically going at it, and protesting. Solidarity in this context would be seen through standing up and mobilising against the oppression whilst standing together with those who experience it around you. As part of commemorating the legacy that Winnie Madikizela-Mandela has left behind, we have stressed the importance of reviving her legacy yet there are still questions on the credibility of gender based violence campaigns in spaces where we are trying to reach solutions to social justice hindrances.

If women state that the reasons why one political campaign has the potential of achieving political plight through measures of funding and social support over the other is because of credibility, then what does solidarity actually look like?

We gather as social justice activists in the fight against GBV with the same aim of making change yet we still enforce the same hindrances amongst each other. Does financial and or social status determine solidarity, and has solidarity become elitist?

Elitism is an issue within the activism spaces where we claim to be progressive and ‘woke’. Many organisational structures hold many elitist methods whether intentionally or unintentionally. This is evident in how we respond to different issues. Our activism is largely dependent on ‘who knows who’ and what they can do for the advancement of one’s advocacy.

Networking becomes an exclusionary mechanism in activism and it can lead to the promotion of certain campaigns above others because of what the cause may mean to an individual. Networking creates a room for a selective few to be part of the conversation of social justice whilst also leaving behind a huge population of people, often those who are directly affected by socio-political issues.

The significance of mobilising lies in the fact that it is not exclusionary and is also an active means to practice one’s political freedom. Mobilising is not a call to violence but rather to serve as a space where women are able to disrupt the normativity that is the war on our bodies and actually be heard. The patriarchal system thrives on the voiceless and powerless, and sets up ‘channels’ for us that we have to adhere to in order to address our grievances yet that very system excludes women from enjoying their natural freedom to be and treated as human. The same channels put in place are the ones that are clearly not working today. Nationally there has been a loss in political patriotism on such a deep running level.

With the demobilisation of our political power seen through the responses by government to protests in the past three years, we carry with us a ‘dog eat dog world’ mentality, coupled with downplaying, and whitewashing which is a result of the forced assimilation of capitalist ideals which have harmed political power and political action. These ideals are hindering us from exercising our political freedom(s) to full extent. Through mobilising and organising, women can really make things happen in their favour if we just stuck true to the meanings of solidarity.

Yolanda Dyantyi is an Alliance and Partnerships intern at Gender Links. This article is part of the GL News and Blogs series

One thought on “SA: Call for young women to mobilise on freedom day”

I am in full support of the total shutdown. I am a survivor of a hijacking that took place in 2010 were I sustained multiple gun shot wounds. It took me two years to recover and I have never felt safe being a woman in South Africa. What can I do to help this campaign become a success?