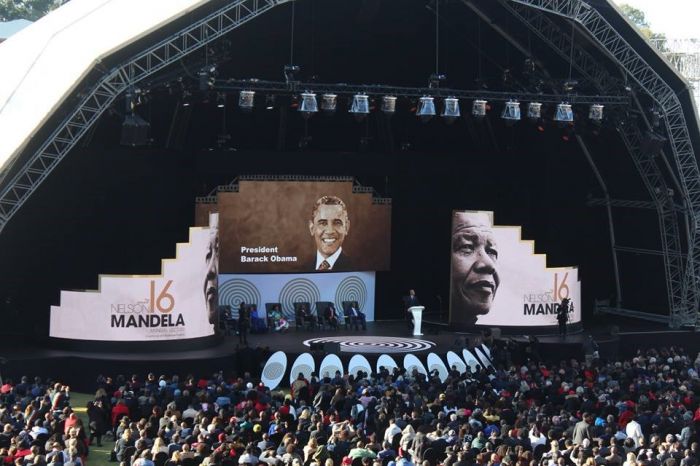 Nelson Mandela came across as a ruthless man and a perpetrator of violence to the apartheid government and white people of that time. He was put away for a very long time because his intelligence threatened their capacity to rule. Not even jail bars could put a man with a vision down. Nelson Mandela never stopped fighting for what he believed was right.

When Nelson Mandela was appointed the first Black Africa post-apartheid era, all black people in the country were ecstatic. It was what they had waited for from the time Nelson Mandela was held captive up until he was released in 1990. However, the society needs to ask itself whether this is the freedom Madiba fought for; Freedom that has created a gap between the rich and the poor, unequal gender relations and/or racial segregation.

The 16th Nelson Mandela Annual Lecture was held at Wanderers Stadium in Johannesburg on the 17th of July. South Africa was graced by the presence of former President of the United States, Mr Barack Obama. Obama, being the main speaker, touched a massive number of people when he spoke about how Nelson Mandela fought for freedom and harmony.

Madiba was also one of the feminists to be found in Africa. He believed so much in women’s empowerment in the public sphere. When the first parliament of the free South Africa opened in 1994, Madiba said, “Freedom cannot be achieved unless women have been emancipated from all forms of oppression.” He understood the positive impact women have in the society, despite stigmatizing them as soft and emotional when it relates to their involvement in politics.

Men and women in Africa, however, are yet to be equal. President Obama said, “Women and girls continue to be blocked from positions of power and authority. They are still paid less than men for doing the same work.” Young women have been encouraged to take up STEM (Science, Technology, Engineering and Mathematics) subjects to secure better careers. However, even if they can work twice as hard as men, women would still get paid less.

Nelson Mandela valued education so much that he believed that every person needs to be educated, especially young people. Nelson Mandela once said “What counts in life is not the mere fact that we have lived. It is what difference we have made to the lives of others that will determine the significance of the life we lead.” He chose to put his life at risk for black people, including the current generation, to live freely in their country.

The nation is celebrating Nelson Mandela’s 100th this year. Many people argue that Tata Madiba is getting more attention than he deserves, especially because he did not fight alone to attain freedom. Indeed, Nelson Mandela was not alone and he did not spend years in prison alone. However, he was the pillar of the massive people who engaged in fighting against oppression. He decided to jeopardise his career as a lawyer for black people to be emancipated from all forms of coercions.

One person who believed and encouraged the spirit of Ubuntu is Mandela. He did not want to see people being trapped in poverty. Barack Obama mentioned how the rich who have more, at present, would resist giving the poor who have less. There is a wide gap between the rich and the poor worldwide. The wealthy people have turned a blind eye, and are hardly engaging in improving the livelihoods of the poor.

Giving does not mean taking all the bread of your children and giving it to the next person, but to halve and sharing it with the other. The society needs more people who will take more children to school, donate uniforms and issue out bursaries for tertiary education. Nelson Mandela’s legacy for people to be educated should not perish. People from other countries should look at South Africa and see it blooming even after Nelson Mandela had passed.

As the country celebrates 100th birthday of the icon, it needs to reflect on itself and ask if Nelson Mandela could be proud if he was still alive. Is the country still liberated if there are ongoing killings of women happening, unequal power distribution, famine and poor quality of education? Let the country exercise the spirit of unity and harmony like Tata Madiba did in his lifetime.

Sandiswa Manana is an Intern at Gender Links. This article is part of GL news and blogs.