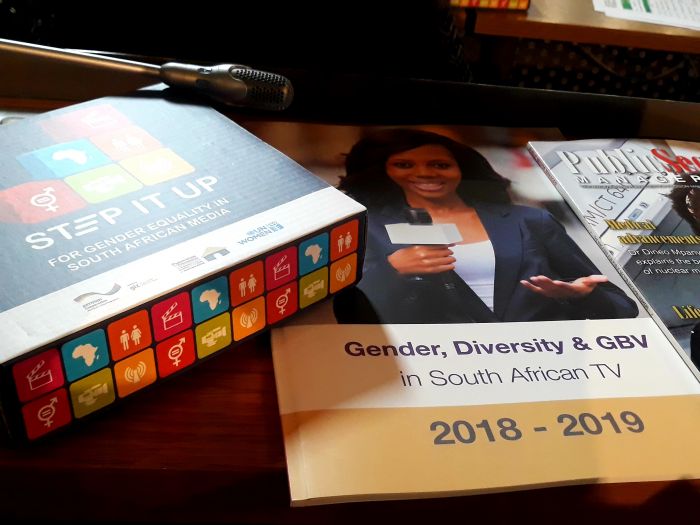 Pretoria, 4 October: Deliberate. Deliberate was the word of the day at the recently convened Women in Media Dialogue hosted by Government Communication and Information System (GCIS) in partnership with Media 24.

The dialogue sought to create a conversation for communicators and media to propose concrete actions and to address gender inequalities in the media. The key point was that media need to make deliberate efforts in accessing women’s voices, in changing the narrative when presenting and portraying  women and pay particular attention to sensitivities especially on  Gender Based Violence (GBV) and to put women in decision making positions in the media so they can influence practices within the media space.

25 years later since the Beijing Declaration and Platform for Action it is disheartening that women have to continue to fight for their rights to be realised in this sector and for sexism and patriarchal attitudes and tendencies to be dismantled in this space. With new technologies having taken root women in media have to continue waging a war that has extended to online spaces with new threats such as cyber-misogyny.

Indeed we find that there have been steps forward however many steps back have been made in dealing with gender inequalities in the media. The question is, have gender equality concerns been taken seriously in this space since 25 years ago when thousands of women gathered in Beijing and identified media as a critical area of concern because of the immense power it holds to influence people’s  attitudes and perceptions.

The media shapes our world view and contributes immensely to our understanding of who we are, our value and our existence in this world. However, when only one fifth of women are accessed as news sources in the media then women’s voices can be said to be undervalued, and their existence systematically erased from the screens, newspaper pages and news feeds that we see every day.  This is a skewed view of the world. This is not only a South African phenomenon but transcends our borders. The Gender and Media Progress Study conducted by Gender Links in 2015 in 14 Southern African countries shows that women consist merely 20% of news sources in the region. These sources range from a low of 6% in the Democratic Republic of Congo to 28% in Seychelles and Botswana.  In the same year globally women only made 24% of those who were seen, heard or read about in the news.

When it comes to the most talked about topics such as politics, economics and sports the media is still sending a message that these topics are for men as women hardly ever make it to the news.  A recent study shows that despite GBV being one of the most flagrant and persistent violations of human rights in South Africa, the topic comprises only 2% of TV news thus not given top priority. This is of grave concern as GBV incidences continue to skyrocket in the country.

Although women have made significant progress in getting into the media sector they continue to struggle to break the Glass Ceiling and move up the ladder.  Many times the women who have reached higher positions in the newsrooms feel isolated as there is no critical mass of women in these echelons that they could look up to and have support structures. Furthermore, gender stereotypes continue to be pervasive in the media both in the content and newsroom practices.

The SADC Protocol on Gender and Development has rightly recognised the importance of the media through a standalone Article on Media Information and Communication calling on member states to ensure equality in voices through all coverage as well as in ownership and decisions making structures of the media.  It also discourages the media from promoting gender stereotypes and encourages them to play a constructive role in eradicating GBV through gender sensitive coverage.

The Gender, Media and ICTs movement have an urgent role to play on ensuring gender equality is achieved in and through the media and ICTs so that there is equal representation, fair portrayal and treatment and women can practise journalism in a gender sensitive and responsive environment.

The challenges faced need both new and strengthened deliberate and concrete strategies. It can no longer be business as usual in the media. Women cannot fight this battle alone men have to come to the table too if we are to eliminate gender stereotypes, sexism and dismantle patriarchal attitudes and practices. The media needs to take ownership of the gender equality struggles and set diversity and inclusion targets and implement sustainable action that can influence change both in institutional practises and in editorial content.

The frameworks from which to work from are there. The time is now for deliberate and concrete action to achieve gender equality in and through the media.

Tarisai Nyamweda is the Media Manager at  Gender Links. This article is part of the GL News and Blogs