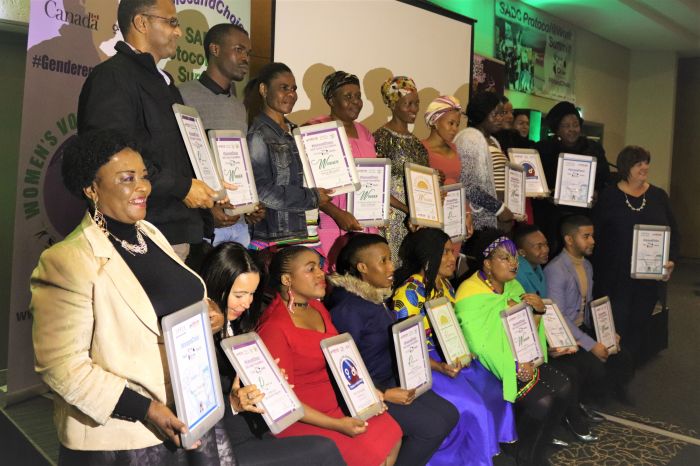 Johannesburg: Gender Links hosted the South Africa #VoiceandChoice summit in Johannesburg at the Kopanong Hotel, Benoni. The two day summit kick started on the 27th and ended on the 28th June 2019. This summit saw over 60 participants from all over South Africa including Mossel Bay Municipality Western Cape Province and Capricorn Municipality Limpopo Province.

As part of the summit GL launched the South Africa Gender and Elections report. Kubi Rama from Gender Links presented the findings of the elections audit. The report showed that, South Africa broke new ground in the 2019 elections with 46% women in the House of Assembly and provincial legislatures and 50% women in cabinet. All the speakers in the national and provincial legislatures are women.  Women voters continued to predominate.

The goal of gender parity remains elusive in political party leadership; the upper house and women premiers. President Cyril Ramaphosa missed a golden opportunity to appoint a woman vice president.  A glaring indicator in women’s lack of voice in public affairs is the decline in women sources in the media, from 25% in the 2014 elections to 20% in the 2019 elections. These are the key findings of the Gender Links (GL) Gender Audit of the 2019 South Africa elections, where we probe the numbers but also ask: beyond numbers, how far have we come in creating a more gender responsive state?

The summit participants presented in the following #VoiceandChoice categories:

The main purpose of the #VoiceandChoice Summit is to allow participants to learn and share best practices from various sectors across the countries including Government departments, Non-Governmental organisation (NGOs), Community Based Organisations (CBOs), Faith Based Organisations (FBOs), Local Government councils as well as the media. Participants presented and shared the work they are doing on the ground, in different sectors that include Action, Youth, Media, Entrepreneurship as well as Centres of Excellence Institutional Awards.

The summit brought encouragement to many participants. Anna Molala from Limpopo who participated in and won the Entrepreneurship category thanked Gender Links for giving them the space to come together as the civil society to showcase their work and network. She said this is her third time attending GL summits and that they have helped her to be more confident in the work that she does and have also equipped her with ways of expanding her business. “ These summits build us and encourage us to do more, we do not only come here to present but to learn from each other as well, Ana said.

Nomthandazo Mankazana from GL gave an informative presentation about the new Canadian funded project called Women’s Voice and Leadership which seeks to build the capacity and activities of local women’s organisations and movements. The project aims to empower women and girls and advance the protection of women’s and girls’ rights and to achieve gender equality.  Participants were excited to hear about the project saying that their projects will finally get financial support as they run them on a low or no budgets at all. Speaking during the Mankazana said GL together with the Canadian government hope to bring change and assist the women lead organisations through this funding.

At the award giving ceremony the key note speaker Tinyiko Shikwambane from #The TotalShutDown reminded the participants that they are all winners in their different fields. She also applauded them for being drivers of change in their communities. “The work you do is tiring it feels unseen yet makes a huge impact in people’s lives” said Shikwambane. She pleaded with them to support each other and take care of the networks the summit creates, saying that relationship building is key to growing the kind of work they do.

When addressing the participants during the award giving ceremony one of the judges Pravienna Naido said the work that they do is incomparable to the work being done in South Africa. “You do your work with little or no resources with passion, commitment and it can only be passion that drives you to keep doing it without resources” she said. Naido encouraged them to learn from each other, network and work together to strengthen the great work they do.

The Voice and choice campaign connects the dots from global to regional to local level in the implementation of the gender equality frameworks. Under the #VoiceandChoice campaign GL also conducted a mapping of SRHR policies and laws in SADC to gauge whether countries have put in place SRHR laws and policies and whether these are adequate in the promotion and protection of SRHR especially for youth and adolescents. This mapping gives firm grounding for advocacy purposes to hold governments accountable.