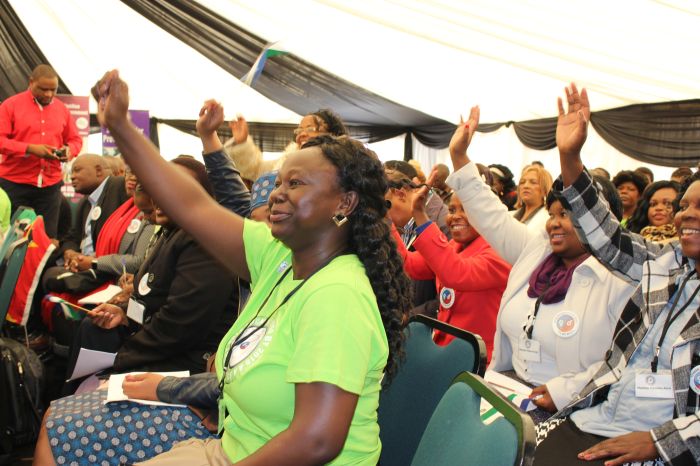 SA: I am a feminist, shout it out loud!

Johannesburg, 4 August 2022: This Women’s Month as we celebrate the anniversary of the historic march by about 20 000 women to the Union Buildings on 9 August 1956, to protest against legislation aimed at further restricting the movement of black women in urban areas, I reflect on what it means to be a feminist in Africa and why so many women shun the term.

One respondent said “I struggle with the insistence on using the term feminist. It means something else to everyone. The word means nothing to my mother, grandmother, or aunt. It means nothing to most of the women we are supporting and sometimes it is an alienating word. It would be better to use words that people understand.”

To describe the word feminist as alienating is interesting.  Alienating to who and why? Feminism in Africa in general and South Africa in particular is a contentious term as it is seen as a western import and against African culture and tradition.

Feminism has a reputation for being radical. There is the largely mythical bra-burning incident at a protest in the late 1960s where women hurled mops, lipsticks and high heels, and a bra, into a “Freedom Trash Can” to symbolically throw away things that oppressed women.

Since then feminists are often portrayed as angry, bra-burning, man-hating, (mostly white) women rather than being recognised what they have done for women’s rights. We have feminist movements to thank for our right to vote, our right to bodily autonomy and so many more rights and opportunities we would not have if women had not agitated for them.

Throughout history feminists have been derided for daring to speak out against grave injustices taken place against womxn.  This spelling aims to avoid perceived sexism in the standard spelling, which contains the word “man”. The term “womxn” gained ground in the 2010s as more inclusive that the standard women.

Yes, feminists are angry, but womxn are allowed to be angry, and if we make conservative men and women uncomfortable then we are succeeding.  Everyone should feel uncomfortable and angry at the violations of womxn’s bodies and rights that have been sanctioned in the name of tradition and culture.

While the term feminism is Western in origin, does that mean it is Un-African? Is there such a thing as African feminism? Can this term be appropriated to the struggles of African womxn?

African feminism is rooted in African contexts and value systems and the fight against colonialism. All feminists are united in opposing harmful practices like female genital mutilation, early child marriage and pregnancy and challenges traditional notions of marriage and family. Because they should be stopped.  What purpose do these harmful practices and traditions serve, other than to harm womxn and keep them oppressed? Is that a culture we should really be subscribing to?

In her TEDTalk entitled “We should all be feminists” Chimamanda Ngoza Adichie says “Culture doesn’t make people; people make culture”.  She talks about her experiences of blatant sexism in her home country Nigeria, where culture and patriarchy remain deeply entrenched. Adichie talks about how norms are socially constructed and have been entrenched over time, but which can also change if we start doing thing differently. “If we do something over and over again, it becomes normal. If we see the same thing over and over again, it becomes normal.”  We have the opportunity make a new normal.

Some people, women and men, may ask, Do we still need feminism?  The answer is a resounding YES! In 2022, we need the movement more than ever.  We are living in a time when the hard-won rights of women and girls are being rolled back.  Covid-19 is one reason, but more worrying is the backlash against women’s rights by conservative actors and governments, and the shrinking of democratic space in many countries around the world.  The recent overturning of the 1973 court case Roe v Wade, which gave women the right to terminate her pregnancy in the United States, is just one stark example of this.

In South Africa women have fought for, and gained, many rights over the last five decades. On paper we look good. We have the highest representation of women in parliament in the SADC region, abortion is available on demand, everyone has the right to love and marry who they wish, and there are many laws and policies that advance and protect women’s rights and gender equality in the country.

However, in practise, South Africa still has exceptionally high levels of sexual and gender-based violence; maternal deaths are high, many of which are because of unsafe abortions; women remain the poorest, most likely to be unemployed or employed in precarious work, we have seen women’s representation in local government rolling back and women are still underrepresented in most spheres of society.  These are just some of reasons we still need feminism.

As we celebrate Women’s Month we remember the iconic South African women, Albertina Sisulu, Helen Joseph, Lilian Ngoyi, who led the women’s march in 1956. They may not have called themselves feminists at the time but to me they embody the very best of that word. It’s time to reclaim this particular F word, boldly and unashamedly declare ourselves feminist because we believe in a fair and just world. Simple as that.

One thought on “SA: I am a feminist, shout it out loud!”

I am a feminist. My daughter was murdered by her boyfriend (intimate partner femicide- suicide)on the 13 May 2007 on mothers day celebration. I started Femicide awareness raising and visiting families who lost women and girls to homicide,I was told by my husband to use this term wherever I go, it did not work even I approach health and social department.i did not look back I continued. I am now communicating with Global 16 Days Activism Campaign Team they produced a video with my testimony for 2022 #LetsEndFemicide and the petition to declare December 6 as the International Day to End Femicide.As a mother is not easy to be on the platform to share I once attended your event in Braamfontein Hotel looking at women sharing about their abuses was normal however mine to heal is confidential, these are two different aspects I have observed and painful. Criminal Justice System is a hell, I was told that my daughter and her boyfriend both commited suicide and chased away from the court room. I never went back to work.

Comment on SA: I am a feminist, shout it out loud! Cancel reply