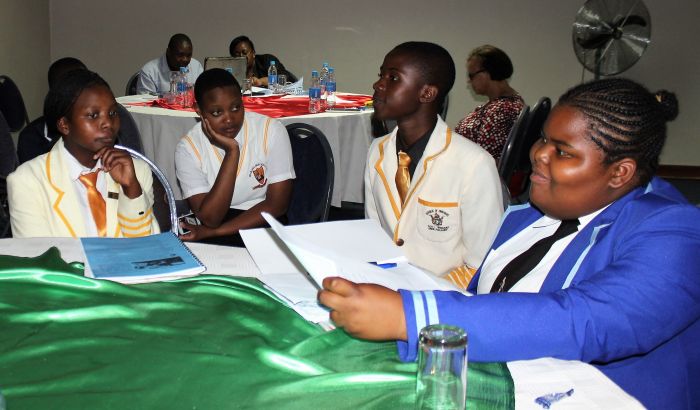 Bulawayo, 19 July: A teenage girl from Bulawayo’s Mzilikazi suburb was in tears as she bravely narrated how she was drugged and gang raped at a Vuzu party held at a house in one of city’s leafy suburbs.

The 17-year-old girl believes her drink was spiked when she left it with one of the boys while going to the toilet.

She vividly remembered waking up in a room with empty beer bottles strewn all over, still lightly intoxicated and feeling numb while lying on her stomach.

“I woke up with a love bite that stretched from my belly to my shoulder. My pants were also partially torn and I had bruises on my thighs,” she said with tears streaming down her face.

“This was after I had attended a Vuzu party at the invitation of my friend. I was drinking wine and when I went to the toilet I left my drink with one of the boys. When I got back, I took a couple of sips from my drink and that’s all I remember.”

The above case is a poignant illustration of how lack of knowledge on Sexual Reproductive Health and Rights (SRHR) and Comprehensive Sexuality Education (CSE) are the primary causes of the indulgence in high risk sexual activities such as Vuzu parties by young people who now live in a world riddled with Aids as the leading cause of death in adolescents in sub-Saharan Africa and the second leading cause of death in adolescents globally.

CSE refers to curriculum-based learning that approaches sexuality and relationships with information that is age-appropriate, scientifically accurate and culturally acceptable.

CSE will no doubt stem the problems caused by pupils engaging in high risk sexual activities such as Vuzu parties.

Vuzu is a local term used to describe a party where alcohol binging, casual sex and drug abuse takes place and these parties are usually held on the first and last Saturday of the school holidays.

At these parties, teenagers also indulge in whisky drinking competitions, smoke dagga and indulge in group sex. Some even consume illicit brews, and engage in substance abuse.

The majority of adolescents lack the knowledge required to make those decisions responsibly, leaving them vulnerable to coercion, sexually transmitted infections and unintended pregnancy.

In 2017, Zimbabwe launched its second National Adolescent and Youth Sexual and Reproductive Health Strategy amid calls for stepping up interventions to address a myriad of challenges facing adolescents and young people, who constitute a third of Zimbabwe’s population.

In a bid to stem the above challenges, the Government is working on a CSE policy for primary and secondary schools.

Primary and Secondary Education Minister Professor Paul Mavima said the policy was basically a promotion of health awareness in schools where learners are taught about prevention.

“Health personnel will come to schools often and schools will have links with their nearest health services. Schools will be a place where learners are taught good behaviour and the dangers of early indulgence,” said Minister Mavima.

The policy is in line with Southern African Development Community (SADC) SRHR strategy which provides that member states should accelerate and improve delivery of quality comprehensive sexuality education for in and out of school youth by the education and youth sectors.

An 18-year-old single mother, Alleta Zuva shared how a lack of CSE caused a huge negative impact in her life.

“I learned all the wrong things,” she said, “and it hurt me. I regret having a baby so young and the development dashed all my hopes of becoming a career woman,” she lamented.

She concedes that lack of sex education at her former school was one of the biggest causes of her predicament.

Gender expert Audrey Manyemwe who is also a senior health and safety officer with Bulawayo City Council (BCC) welcomed the introduction of CSE in schools and appreciates the contribution it will make especially at a time when most parents are uneasy, talking with young people about SRHR issues.

“Comprehensive sexuality education is very important because of the way our society hides information on sexuality. Many parents are unsure of where to start or may feel uncomfortable about having these conversations, but avoiding the subject will not stop their children from having sex or keep them safe.

“African culture assigns the role of sexuality education to the aunties, uncles or grandparents and with the breakdown of the extended family due to globalisation, migration and urbanisation this system no longer works,” said Mrs Manyemwe.

On educators’ competence in CSE, Mrs Manyemwe said: “The teacher’s role in the success of CSE cannot be over-emphasised. In-service teachers should be taken back for retraining and re-oriention on the matter. Student teachers’ curriculum on CSE has to be reviewed and made appropriate and relevant. Supervisors or inspectors have to be retrained and re-oriented also.”

Although schools have the potential to contribute to healthy individual behaviour as well as improved social norms around equality and non-violence, a retired teacher Mr Taurai Muripa (72) believes the involvement of parents can also help increase confidence to resist some cultural and religious pressures around sexuality, sexual behaviour and gender expression.

While, CSE is touted as a critical intervention in efforts to end HIV and Aids as a public health threat, and promotes gender equality and healthy relationships, its full implementation is likely to be hindered by economic, social, political and cultural challenges.

Some of these are lack of dedicated funding and systems to monitor and evaluate teachers and students on CSE, insufficient adaptation of the curriculum to local contexts and inadequate weight that is likely to be given to CSE when integrated into other subjects among other social and cultural challenges.

Gibson Mhaka is a journalist from Zimbabwe. This article follows GL media training on Reporting SRHR in Zimbabwe. It first appeared in B Metro

As Zimbabweans we need to take action.

These children are idle find them something to do.