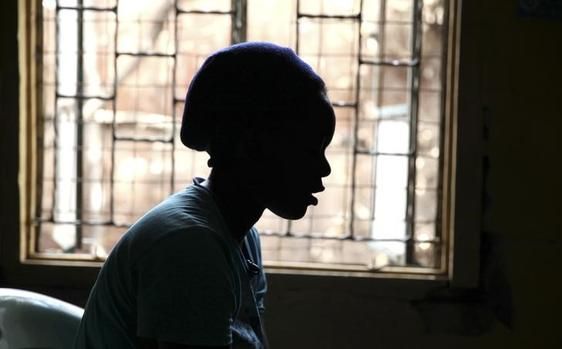 Johannesburg, 7 December: I meet her by her big black gate as she is rushing out to the street to call  her second daughter to return home.

“Can’t you see it’s now too late to be out in the streets?” she asks her daughter.

When we sit down for the brief interview, she opens up about the struggle of raising children far from home and away from the support of the extended family. Ms Dube* is a 46 years old single mother 0f three girls.

She also has a grandmother since her first born daughter, who is 16, has a daughter of her own. The granddaughter is a year and a half old.

“Every time I look at my granddaughter, I wonder if she will also grow up this way, like most girls here,” Ms Dube speaks softly, “I want to protect her from this place. I try with my daughters, but sometimes a mother’s love is not enough. I would have wanted them to grow up in Bulawayo (Zimbabwe), but there is no one to look after them there. My mother is late.”

Ms Dube, a devout Christian, doubts if the church can protect these young girls in any way.

Yeoville is part of Johannesburg’s two other residential areas – Berea and Hillbrow – that are known as vibrant migrant communities. There is an unmistaken fingerprint of African migrants in terms of language in the streets, churches, restaurants and businesses around.

Under the colonial and apartheid regimes, the suburbs were mostly for white immigrants as blacks were relegated to townships. However, after 1994, black African migrants took over the suburbs and today rent most of the accommodation around.

The suburbs are crowded.

As migration has become the movement of families rather than individuals, it is common to find a family of six or more living in a bachelor apartment. Sometimes these bachelor flats are sub-divided by curtains to accommodate more than a single family.

“There is no privacy in these spaces,” says Ms Chikuse*, who is married and lives with her husband, a 14 year old daughter and an eight years old son. “Our children are exposed to some of these things at a young age”.

Ms Chikuse is customarily married to her husband. Her family back in Zimbabwe has received lobola (bride price) from her husband’s family but they are yet to be married at in court or church.

I confirm with Ms Chikuse if by ‘some of these things’ she is referring to sex and sexuality.

“Yes, especially that,” she says. “But I am also referring to what we always took to be done by adults only like drinking and smoking. Our children are even into drugs now, smoking mbanje at a young age.”

I point to her that there is nothing wrong with mbanje (Marijuana), according to the South African Constitutional Court’s recent judgement that legalized the use of the herb within one’s private spaces.

Ms Chikuse says her daughter gave them a fright in June this year when she disappeared from home almost the entire weekend only to return on Sunday evening.

“We were about to report her as missing at the police station,” she says. “That weekend we last saw her on Friday morning when she was going to school. She did not come back or she came back when we were not there, I don’t know. But she did not sleep at home on Friday and Saturday.

Ms Chikuse said her husband wanted to beat up the daughter but she restrained him and told him corporal punishment is illegal.

“He was angry with me,” she says. “He said I was spoiling the girl and how he wished we were back in Zimbabwe, then he would have taught her a lesson.”

In December 2014, the Zimbabwe high court suggested that corporal punishment by parents, guardians and persons in loco parentis might be unconstitutional.

In February 2017, the high court ruled that corporal punishment of children in homes and in schools was unconstitutional as inflicting the kind of punishment on children was in breach of the 2013 Constitution which protects people’s right to protection from inhuman and degrading treatment and from all forms of violence.

It is, however, still unclear if these rulings are enforced as heavily in Zimbabwe as it is done in South Africa.

Ms Dube speaks of her struggles with her first born daughter.

“She has reported me to the police several times when I physical discipline her,” she says. “It is hard because as parents we cannot shout at our children, we cannot beat them; we have to negotiate with them.”

With each sunset in Yeoville, Berea or Hillbrow, it is not unusual to see groups of young teenage girls, who are just getting into the puberty stage, hanging around young boys of their age.

“We are not too worried about courtship among these young people, who otherwise should be concentrating on their school work, but we are worried about how the possible awareness of their sexuality exposes them to older men,” says Mr Ncube*.

Mr Ncube is a father to four daughters and says he is considering taking his children to Zimbabwe.

“They were all born here but I have managed to secure Zimbabwean birth certificates for them,” he says. “I seriously consider taking them back home because they cannot access ‘proper’ schools here and you can see what this place is like.”

“Life is fast here,” Mr. Ncube shoots that sentence out, shaking his head, before continuing to speak slowly as if measuring his words, “Girls fall pregnant at an early age and drop out of school. They really don’t have role models to look up to here, to inspire them to stay at school. Even among those who go up to Grade 12, few go to university or proceed with their schooling or training because most people here don’t have proper South African documents.”

For Mr. Ncube, young people in these migrant communities seem to be caught up in a vicious cycle of sex, alcohol, drugs and violence that reproduces poverty.

Some of these young girls fall pregnant and drop out of school and considering that Johannesburg is a capitalist intensive and highly financial space, the young mothers quickly have to find a way of looking after their children and after themselves. In the end they are mostly pushed into menial jobs that pay as little as R1 500 per month or resort to lives of sex work.

I ask Mr. Ncube if it the challenge is only with girls.

“It mostly shows in girls,” he says. “We are also worried about our boys getting involved in alcohol, drugs and violence at a young age. Just imagine that any random 14 year old boy – especially those you see hanging around corners, smoking secretly – walks around armed with a knife. This violence  is worrying. They  form into gangs to fight over girls, to fight over prestige and all that nonsense.”

It is hard to get any information from the nurses at the two clinics – one in Yeoville and another in Hillbrow – because they have to get clearance from their superiors in the Gauteng province.

However, observing the clinics, one can see teenage mothers walking in and out of the clinics.

The minister came under attack from the opposition Economic Freedom Front (EFF) party and the deputy public protector, Kevin Malunga, for statements that bordered on xenophobia.

The media quoted Motsoaledi as saying: “The weight that foreign nationals are bringing to the country has got nothing to do with xenophobia… it’s a reality. Our hospitals are full and we cannot control them.

“When a woman is pregnant and about to deliver a baby, you can’t turn her away from the hospital and say, ‘You are a foreign national.’ You cannot.  When they deliver a premature baby, you have to keep them in hospital. When more and more come, you cannot say, ‘The hospital is full now. Go away.’ They have to be admitted, we have got no option – and when they get admitted in large numbers, they cause overcrowding, infection control starts failing.”

In March this year the Gauteng provincial South African Human Rights Commission (SAHRC) reported that access to health care for migrants. The report said health care for immigrants is hindered by the conflation of the various categories of migrants and their respective rights and entitlements. This results in all migrants being treated either as economic migrants or as illegal migrants who have little to no legal entitlements over socio-economic rights, such as the right to proper health care.

For parents raising children, especially girls, in Yeoville, Berea and Hillbrow, the struggle is larger than health and borders on crime and violence.

The increased incidences of girls, some below the age of 16, being drawn into the world of courtship and sex among the African migrant communities clustered in the area are characterized by alcoholism and violence.

Mr. Vundla*, a 41 year old man, was involved in a fight with another man in early November when the man was harassing his 13 year old daughter in public.

The man was courting the young girl who was buying ice cream at a local spaza shop and when the young girl refused to give him any attention, he roughly pulled her calling her “a slut”.

Mr. Vundla who was waiting for his daughter in the car did not waste time and went out of his car to thoroughly assault the man with a button stick.

“It’s just so sickening,” he says. “I don’t understand why an old man should be proposing love to a 13 year old. By merely looking at her, you can tell that she is under 18. Why should our young girls be harassed in public spaces?”

“What is frightening is that we have to meet this kind of aggression, this kind of violence against our daughters with violence,” he says. “If I was in a similar situation, I would have reacted the same way. It is unacceptable.”

The man who was beaten claims to have lost his phone in the process but did not take the matter to the police. According to sources, some days after, he seemed intent on mobilizing his friends to fight back. However, the matter died down as his friends admitted that, it is wrong to court young girls.

Researchers around gender based violence and migration have reported that Johannesburg settlements have some of the highest gender-based violence prevalence in South Africa.

According to a Wits University and Sisonke Gender Justice Report in 2016, there were over 500 sexual-assault cases reported to the Diepsloot police since 2013. In 2015/16, the South African Police Service recorded 51 895 sexual assault cases.

However, the police do not record the cases in terms of nationality.

Khanyile Mlotshwa is a freelancer from South Africa. This article is part of the 16 Days News Service #VoiceandChoiceCampaign