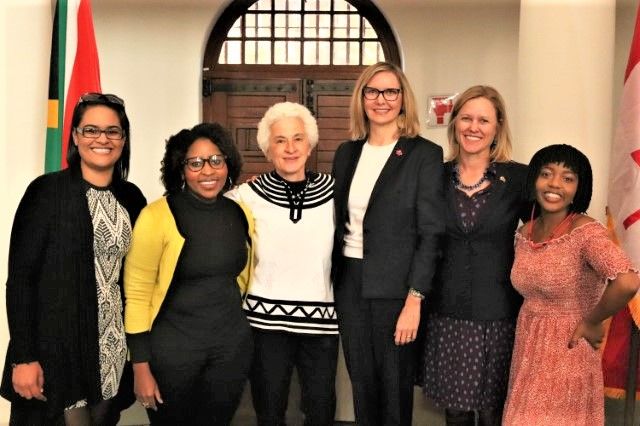 “Across the globe Women’s Rights Organisations (WRO) are among the most poorly funded of all civil society organisations,” notes Jennifer Cooper, Head of Cooperation (Development) at the High Commission of Canada in South Africa. “Yet these organisations play a critical role in advocating for gender equality.”

A mapping of WRO by GL in preparation for the grant making found that the majority of WRO operate on budgets of less than R250,000 per annum. Reflecting the need in the sector, when the grants call went out in January, 485 applicants responded to the three calls.

These are multi-year core grants in four provinces (Gauteng, KwaZulu Natal, Western Cape and Limpopo) for which 20 grants have been awarded; three networking grants that span the whole country and 17 short term rapid response grants; ten of these specifically for urgent action to protect women’s rights under COVID-19.

UKAID via the British High Commission in Pretoria has provided an additional R1 million for twenty COVID-19 Rapid Response grants through the Southern Africa Trust. “We are delighted to join Global Affairs Canada in supporting this fund, one of the few in South Africa that focuses specifically on women’s rights, and entrusting its management to Gender Links with whom the UK has a longstanding friendship” noted Nigel Casey, British High Commissioner to South Africa. “We encourage other funders to contribute to this type of mechanism to channel support directly to women working at the grassroots to promote women’s rights and tackle the effects of Gender Based Violence.”

“Even with sixty grants in total now awarded, the demand exceeded availability of funds twelve fold,” noted GL CEO Colleen Lowe Morna. “Nonetheless we are heartened that we have been able to disburse funds to such a diverse portfolio of well-deserving organisations even under lock down, and during Women’s Month.”

Provincially, WVL has awarded 22 grants to WRO in KZN; 20 in Gauteng; 10 in the Western Cape, five in Limpopo, two in the Eastern Cape, and one in the Northern Cape. While the multi- year core grants were specific to the first four provinces, WRO from anywhere in the country could apply for the networking and rapid response funds. The latter is a rolling fund that will continue to make calls throughout the remaining three years of the fund.

In addition to the specific projects that the organisations are undertaking, WVL aims to help strengthen the women’s movement through networking grantees on critical gender justice issues. WVL networking grantee South African Women in Dialogue (SAWID) hosted a policy dialogue on the implications on the recent Constitutional Court ruling on the electoral system in South Africa on Women’s Political Participation. The dialogue resulted in a working committee to draft a submission to parliament.

COVID-19 Rapid Response grantees will have a dialogue on challenges faced by women, girls, and gender non-conforming persons under lockdown on Thursday 28 August. Policy matters arising from the dialogue will be channelled to appropriate government departments.