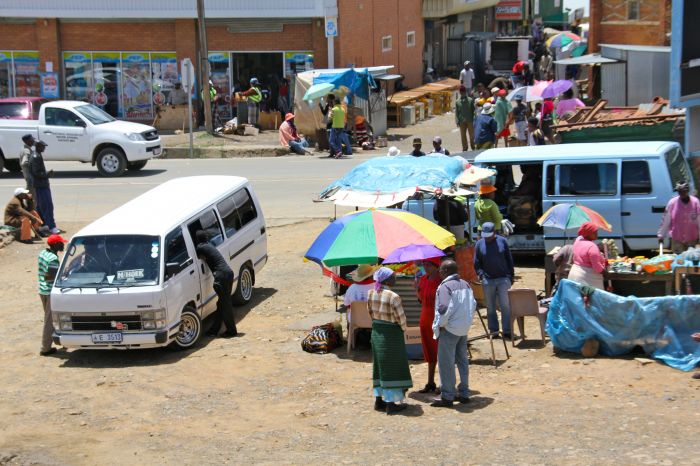 Maseru , 23 April: The deadly COVID- 19 is wreaking havoc globally and impacting negatively on the world economy.

Major economies are suffering   while trying to save lives of their people from the contagious pandemic.

The global economy is rapidly weakening.

Lesotho like all other countries is also feeling the pinch of the COVID- 19 debilitating impact.

The Coronavirus is having a very devastating impact on small traders especially those living from hand to mouth.

Within the period of  the lockdown, there is a howl of protest from the public that they are facing starvation.

‘Mathuso Marake, 35, makes  a living  from the sale of fruits and vegetables on the streets of Maseru.

She works with her husband at the business that is in now on the 10th year.

But with the breakout of the ravaging pandemic in most countries, their life has come to a screeching halt.

Lesotho has not recorded any single COVID- 19 case but followed other countries’ measures to implement a total lockdown.

The country banned a total movement of people except those going for essential services such as health and pharmacies, food retailers, banks and insurance amongst others.

Marake says she has been hardest hit by the pandemic because selling on the street is only her source of income.

And her business deals with perishable goods which have to last for a maximum of a week on the shelves.

She says she was not hoping that the lockdown could have such a destructive impact on her life.

She says with the money that she generates from her business, she is able to take care of her family needs.

“My business is a ‘gold’ mine to me,” Marake says, with a visibly irritated face.

Now her life is mired in misery.

Narrating her ordeal, Marake says she lives in a rented house in Maseru where she has to pay M300 a month.

She says the month is now nearing to an end and she has nothing to give to her landlord.

She says she has used all the small money she has saved to buy daily family needs.

“Missing my work for just three weeks is a huge loss for me,” the mother of three says, adding that her family incurs more costs because winter is knocking on the door now.

Marake says she could not imagine her family’s life from now onwards.

Speaking in tongue and cheeks, Marake says their plight as the family is exacerbated by the children who are not going to school.

“They eat too much where they are staying at home,” she says.

To add to her woes, Marake says she started this business from the humble beginning and now she would have to rise from the ashes if the lockdown is lifted.

She says they had no option but to use up all the stock in the family to save them from hunger.

Her husband Mohapinyane Ramarothole, 48, says he used to work with her wife at the business so that they could put bread on the table for their siblings.

“I usually leave her behind selling when I go out for stock,” Ramarothole says.

He says they are barred to go to their work places by the armed forces who have severely and inhumanly beaten up other street vendors who tried their luck to sell their goodies during the lockdown.

She also sells some small items like fruits and sweets to the students.

But the COVID- 19 has caused her a great agony and anguish.

Ts’epe says chances are high that she would wallow in abject poverty because her business has come to a standstill.

Ts’epe says her sole income for her family comes from selling those goodies to the students and teachers.

She says she has been able to put her children through education and able to put bread on the table with her business.

Over the years, her business has been thriving.

She says the COVID-19 has pushed her to the doldrums.

Ts’epe says the government could have better supported them with food parcels so that they could at least keep their hunger at bay.

In her own words, the lock down has brought more misery than blessings.

“We are afraid to go to work because the armed forces subject us to torture,” she says with a sore heart.

This, she says, deprives her of peace day and night.

Tšolo Lebitsa, spokesman of the street vendors says there are people who solely eke out their living from selling on the streets.

And they sell from hand to mouth.

He says if such people are unable to go to the streets to sell, their families will suffer.

Lebitsa says now hunger looms in most families and people are going to struggle with paying their rent where they stay.

He shares the same sentiment with Ts’epe that the government would have supported them at least with food packages while still staying at home.

He says the move by the government to protect them against the COVID- 19 is good but was not implemented properly.

Lesotho started the lockdown at the midnight of 28th March to 22 April.

It was termed ‘Operation save lives’ by Prime Minister Thomas Thabane.

When the lockdown ended, Thabane extended it with two more weeks starting from Wednesday, 22nd April to 5 May.

So this is a sure sign that there are challenges galore in store for the street vendors.

The government put aside M700 million as a Disaster Relief Fund for the lockdown.

Thabane says as part of his government protection strategy against the small traders, street vendors would not pay their ground fees on the streets for two to three months.

He says they have no option but to extend the lockdown because South Africa, Lesotho‘s main trade partner is experiencing new COVID- 19 infections.

Lebitsa says this is not enough to save them from the grinding poverty they are facing.

He says most street vendors are going to be trapped in a web and vicious cycle of poverty.

Due to this existential threat, there are signs of mounting frustrations amongst the street vendors.

With his eyes alive with pain, Lebitsa says street vendors are emotionally and financially weighed down.

Police spokesperson Superintendent Mpiti Mopeli says people should stay at home until the lockdown is lifted.

He says people should stay at home because this is done to protect their lives against the deadly virus.

He says the police have been deployed on the street to enforce the lockdown.

The document says the lockdown has had a very devastating impact on Lesotho’s already fragile economy.