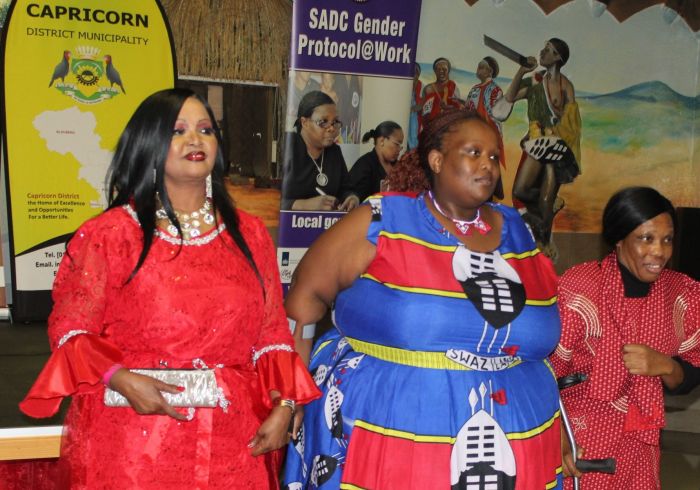 Mbabane, 11 May: The eSwatini SADC Gender Protocol joint Summit between Swaziland Gender Links and Capricorn District Municipality closed in Matsapha on 10 May 2018 with awards to twenty women and five men whose work on the ground won the highest accolades from judges and participants during presentations made this week.

Key messages at the summit included: Swaziland Local Government Association Vice President, Councillor Khethokuhle Dlamini thanked participants on the commendable work they did on coming out their projects. He highlighted that participants should not take this as a competition but sharing of best practices. He said everybody is a winner.  Councillor Dlamini thanked Gender Links and said the partnership between the two organisations SWALGA and Swaziland Gender Links should not end with the summit but should be ongoing.  He thanked the Capricorn District Municipality for coming to Swaziland and said this was the first of its kind and it gave them as councillors as well as SWALGA representatives a big question mark that on what step should the organisation take after this joint summit.  He advised councillors present at the summit that this programme should be taken seriously and said on behalf of SWALGA they are committing themselves to revive the partnership with Gender Links.  SWALGA membership needs to be capacitated on issues of gender equality. He also said some municipalities have gender policies in their workplace through the Centres of Excellence programme.

Ms Thuli Mazibuko, Municipal Manager from Capricorn District Municipality said this was a woman work.  She said women are stronger and they are brave than men.  Men always move backward but women never give up and they always go forward they are patient than men. She thanked all the participants on taking their time to present their projects. She also thanked Gender Links for coming up with such a very commendable project of the Centres of Excellence. “Gender Links has played a very big role in initiating this programme in our municipalities, if it was not for Gender Links we would not have seen the importance of mainstreaming gender and gender equality in our municipalities”.  She also said that this is not a competition but a way of sharing ideas and participants who did not win today should not feel offended but they should take it as an opportunity to learn from their colleagues. She also highlighted that Capricorn District Municipality and Swaziland Gender Links’ relationship has been started and will continue as they have learned a lot from this country. She congratulated the winners and runner ups for their hard work.

Ms Fikile Mkhonta, judge’s representatives thanked the participants and encouraged them to continue and work hard on their projects. She said as judges they came across some gaps especially on the issue of evidence and statistics. She advised participants that they should have their evidence when presenting their projects to judges who will always ask questions and evidence should be always available.  She thanked all the judges and the organisers Gender Links and Capricorn District Municipality for bringing this activity to a success.  Lastly, she congratulated all the winners and encouraged those who did not win that they should not give up but learn from others presentations.

On the evening of 10 May 2018, Gender Links-eSwatini awarded eight (8) winners and six (6) runners up awards at a colourful gala dinner that was held at Esibayeni Lodge, Matsapha.