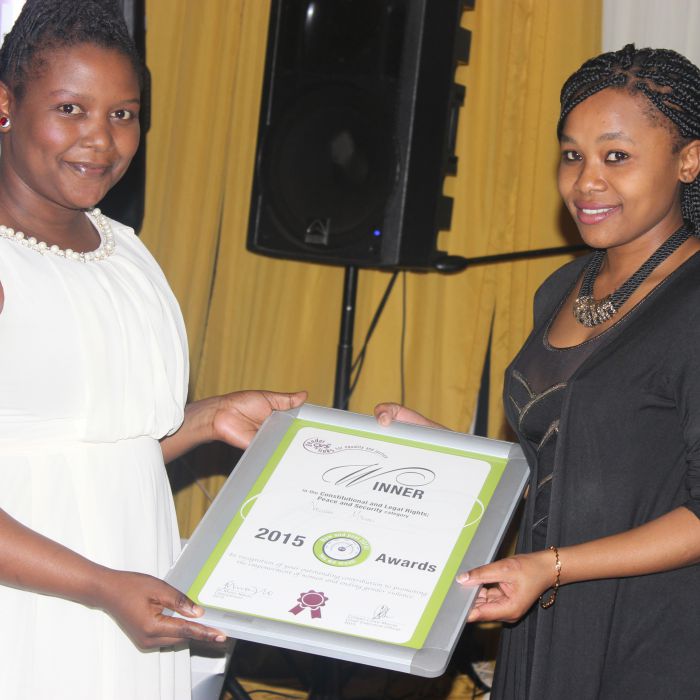 Swaziland: Excitement during announcement of winners

Screams and ululations reverberated in the auditorium at the Royal Swazi Sun Convention Centre when winners in the different categories of the Swaziland SADC Gender summit and awards were announced on Tuesday night. The awards were a culmination of two days of showcasing good practices in gender mainstreaming.

Participants were presented under one or more of these categories; Emerging Entrepreneurs (Start-up and Existing Businesses), Faith Based Organization (FBO), Economic Justice and Education, Constitutional and Legal Rights, Gender and Climate Change, Sexual and Reproductive Health and Rights and HIV/AIDS (SRHR and HIV/AIDS), Gender Based Violence (GBV), Leadership/Gender Champion, Special Commendation, Media Print and Local Government.

“Thank you for the effort you have put into the success of the projects. Whether you have won or participated, the important thing is that you have made a difference in the lives of Swazis,” Bennedict Bennett remarked. Preceding the awarding of certificates, were judges’ remarks on the participants’ projects. The judges noted that some of the ideas submitted under the Emerging Entrepreneurs category were not well developed. This was seen as an indication that participants were not capacitated enough to develop SMART (specific, measurable, attainable, realistic and Time-bound) business ideas.

Judges considered if the projects were replicable i.e. if the business concepts could be implemented in other parts of the country or even internationally. The sustainability of the projects and quality was prioritised in the judges’ selection criteria. Start-up award under Emerging Entrepreneurs was won by Celiwe Shongwe and the runner up was Happy Ndzimandze.

Under the Constitutional & Legal Rights category there was only the winner, Nelisiwe Mtshali. Andrew Moyo was announced as the Gender and Climate Change award winner as well as Sexual and Reproductive Health and Rights and HIV/AIDS (SRHR & HIV/AIDS) runner up.

Nomathemba Siboza won in the SRHR & HIV/AIDS category. Sibusisiwe Mthethwa won the Gender Based Violence award and Samora the runner up. Nokuthula Mbatha was announced as the winner in the Leadership category and Mbusomuni Mahlalela and Khanyisile Mbatha were announced as runner ups. Lungile Mabuza won in the Print Media award and Ntfombiyembuso Tfwala was announced as the winner of the radio award. Media television award was won by Nonhlanganiso Nkosi and the runner up was Nontobeko Fakudze.

The Mbabane City Council won the local Government COEs award and Ezulwini Town Council was announced runner up. Sibusisiwe Mthethwa who contested in the Gender Based Violence (GBV) category was the youngest summit participant. The excited Mthethwa, who refused to have her age disclosed, explained that her project uses drama to initiate community dialogues on issues of GBV in the communities they work in.

In his short moving speech; South African High Commissioner, Happy Mahlangu alluded that by their nature, women are smarter than men and unless men understand and accept that women are smarter than them, they will have a challenge working with women. He said that women have characteristics that men do not have. “Women are consistent, perceptive and they are the ones who bear children. As mothers, women should remember that dysfunctional families produce dysfunctional children,” Mahlangu said.

Adding to Mkhonta’s remarks; the Director for CANGO, Emmanuel Ndlangamandla added that the gender agenda is a long journey for all countries of the world. He assured the participants that no country has fully achieved the 28 targets. “This 50/50 is a bold step, I like what SADC is doing in terms of encouraging equality among women and men. These awards are an attempt by Gender Links to recognise our efforts, he said. Ndlangamandla encouraged those who did not win according to the judges’ ratings by reminding them that being part of the summit was the biggest achievement thus they have all won.

In recognition of her administrative role in the advancement of the gender agenda, Swaziland Gender Links Country Manager, Ncane Maziya, was honoured with the Dedicated Service to Gender Links Staff Award.

This article is part of the Gender Links News Service special coverage of the SADC Gender Protocol Summits underway across the region, offering fresh views on everyday news

Comment on Swaziland: Excitement during announcement of winners Cancel reply