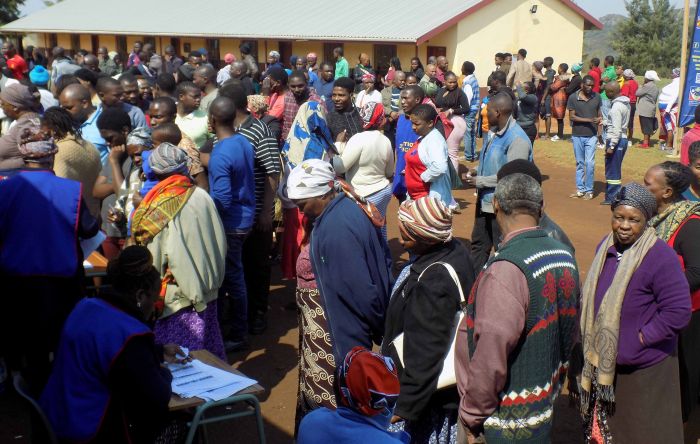 Swaziland: Only 14% Women in elections race

Mbabane, 17 September: Out of the 670 candidates that will contest for the secondary elections in both MP and Indvuna Yenkhundla, only 98 (14%) women candidates remain to contest against their male counterparts. Again the “Vote for a Woman” campaign has not made the desired results as more men than women won the primary elections held on the 25th August 2018. Men dominated the primary elections in all three categories, Bucopho, Indvuna Yenkhundla and Member of Parliament (MP).

A particular focus of this effort of conducting civic education by Civil Society and the Elections and Boundaries Commission (EBC) has been on women, motivated in part by the disappointing results of the last (2013) elections in which only one woman was elected from 55 Tinkhundla constituencies. Even with the appointments made by the King of women into the House of Assembly and Senate, women comprised less than 20% of the then membership of parliament.

Civil society, which has been advocating for gender equality in all spheres of life, continues to express concern about the lack of women at the highest levels of political decision-making. During this election period, civil society has been conducting a “Vote for a Woman” campaign, which had included conducting awareness-raising activities at community level and amongst women’s groups as well as some capacity-building of aspiring women candidates prior to voter registration.  Despite these efforts, and the high registration of women voters, reports indicate that the numbers of women nominated for all three elective offices remain low. A number of factors have contributed to this including the prevailing socio-cultural norms about women’s place in the domestic rather than public sphere, lack of resources, as well as issues of confidence and self-esteem amongst women themselves.

During the Primary Elections the figures indicate that there were 670 candidates in election standing for both MP and Indvuna Yenkhundla categories. Of this figure, 98 (14%) women remain to contest against their male counterparts.   A total of 572 males will be competing against the 98 women in September 21, 2018 which is the date set for the Secondary Elections.  The statistics show that only 44 qualify to be MPs while 287 men are part of the most wanted seats for the MP position in the coming eSwatini 11th Parliament. In total, 331 candidates are in the race for being MPs.   However, the number of women against men stands at a very low 14%, while the males are at 86%.

The country is likely to witness a similar outcome as experienced after the last term’s elections as only one woman emerged from the national elections in Mbabane East former MP Esther Dlamini in the MP category.  Only 45 women across all over the 400 polling centres won the primary elections held on the 25th August 2018.

This year’s election is the third under the 2005 constitution and has seen the Election and Boundaries Commission (EBC) make an effort to reach out to marginalised groups such as youth, women and persons with disabilities. The EBC’s civic education has included encouraging greater and more meaningful participation by these groups in all aspects of the process, not only as voters but also as candidates for all three elective offices, namely Bucopho, Indvuna yeNkhundla and Member of Parliament (MP).

The election process is now fully underway with nominations having been held on 28th and 29th July 2018 and primary elections held on 25th August 2018. Secondary elections are scheduled for 21stSeptember 2018.

Even though the Elections Act, 2013 prohibits campaigning during primary elections and permits it in between the period after the primary elections until 24 hours prior to polling day, the reality is that “informal” campaigning has been ongoing for sometime now, in some cases in violation of electoral law.  Amongst the challenges observed in Eswatini’s elections is vote-buying, which occurs in many forms, including through manipulation of voters’ low socio-economic status (e.g., poverty, unemployment, etc.) through giving voters gifts of money, food, beverages, blankets. This gives those with large amounts of resources, usually male candidates, and an upper hand and contributes to worsening the already unequal playing field. Women have reported not being able to compete with the amounts of money being spent by some of their male opponents.

In view of this, women’s alternative is to focus on issue-based campaigns where they will emphasise their visions for their constituencies and the nation at large. They will also need to demonstrate an understanding of the role and functions of the office for which they are seeking election and their suitability and strengths for that office. Therefore, it will be important for women to be equipped with the skills to present themselves as viable candidates.

In conclusion EBC in collaboration with CSOs should strategise on ensuring that women’s voices are heard on the national development agenda, with the aim of contributing constructively to social, economic and policy dialogue, formulation and implementation at all levels of governance.

One thought on “Swaziland: Only 14% Women in elections race”

Comment on Swaziland: Only 14% Women in elections race Cancel reply