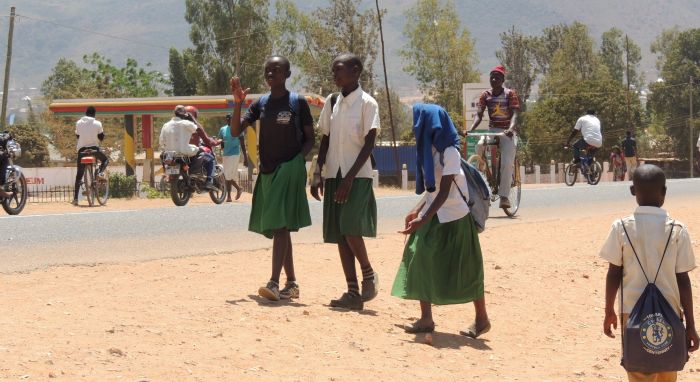 Dar es Salaam, 21 December: The government of Tanzania has been urged to supply essential items for the welfare of the girl child in schools. These items include sanitary napkins which are needed  to help girls who are on their menstrual cycle while they are at school.

The call was proposed by the head teacher of Victoria Primary school in Dar es Salaam, Madam Florence Bonda during a  random  gender interview  regarding challenges encountered by young girls at school and in the surrounding communities.

Madam Florence said that the teachers have been trying help the girls who face challenges during their monthly period. However, the demand is high, and even though the school has an emergency  stock, it is still inadequate.

Therefore, the teacher suggested that government intervene in order to eradicate the problem.

A great challenge is that some girls miss school during their period. Commenting on the issue, a teacher at the school, Genes Gabriel said that the situation has been terribly affecting them. The teacher said sometimes the school tries to help the girls but is financially unable to go an extra mile for all facing problems in securing sanitary pads. Teacher Genes asked the Government and stakeholders to take into consideration the situation. Because the situation is becoming too overwhelming for the teachers to handle alone.

Girls who cannot afford sanitary pads are sometimes forced to use handkerchiefs, which usually cause the girls to soil on their uniforms.

Another teacher at the school, Happy Jonson commented on the need to have more comprehensive awareness programmes for the girls, which will enable them to understand the changes that occur at puberty. The teacher urged the government to intervene in the situation.

Jacqueline Mwafongo a sixth grade student at the school has praised her mother who sometimes manages to buy her pads. However, due to financial constraints, they do not always afford sanitary pads when she is in need. Therefore, Jacqueline sometimes is forced to use handkerchiefs, which she claims makes her get severe stomach pains. The situation causes her to loose concentration in class.

Jacqueline called for the government to take a step towards providing sanitary pads to the schools and to sensitize parents to share the responsibility of sexual education with teachers.

Another student at the school, Janeth Bernard said that since she first started her menstruation periods, she has never had any support from my parents due to financial problems. She said that during her monthly cycle she uses handkerchiefs or pieces of cloth especially on school days.

When parents were asked about the issue, one parent Zainabu Salehe of Manzese, responded that according to their tradition, after starting her period, a girl must take 7 days off school to be taught about menstruation.  Zainabu claimed that the training educates the girl how to take care of herself during the cycle and how to dress the pad or a handkerchief properly.

Another parent Eusebia Ndonde from Mbagala said that every parent would like to protect their daughters from embarrassment, but financial constrains prohibit parents from accessing sanitary pads. Parents therefore resort to instructing their children to use handkerchiefs, hand paper napkins and even toilet paper. Eusebia claims that the problem is not the price of the pads but the economic capability.

A local businessperson, Mr. Gerald sells sanitary pads in a shop in Dar es Salaam. He commented about the current price of the pads.  Gerald claimed that the price of the product is unpredictable from the wholesalers, “There at times the price is moderate, the next time you go for purchases you find it high.” Gerald could not say exactly the reason behind the price fluctuation.

Julieth Muunga is a journalist from Tanzania. This article is part of the 16 Days News Service #VoiceandChoiceCampaign

This is very true, Most of Young ladies get this problem during their menstrual period.