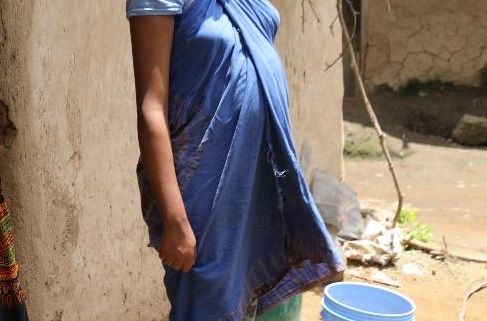 Arusha, 27 November: Coming from a poor family, Sarah* from Sekei in Arusha, Tanzania, this year dropped out of school due to pregnancy.

“It was difficult to continue with studies because of my appearance,” explains the 13-year-old girl with a very small stature

A story behind Sarah’s teenage pregnancy is being told by her mother Janeth (not her real name) who is brokenhearted to see her beloved daughter expecting to encounter with parental responsibilities at that younger age.

“My daughter was raped by her cousin brother. But she didn’t tell me about the incident until I came to find out that she was already five-month pregnant,” the mother narrates.

Currently, Sarah is seven months pregnant—expecting to give birth in December, confirms Mary Joseph* a registered nurse at Moivo Dispensary in Arusha where Sarah currently attends the clinic sessions.

“Sarah was brought here for a pregnancy test. The results showed she was five-month pregnant. It was not easy to convince her to tell us who impregnated her,” explains the nurse.

Her mother says she had suspected that her daughter was pregnant after five months had passed without hearing from her asking for money to buy sanitary towels.

“Sarah used to ask me for money to buy sanitary towels at the end of every month. But for five months she kept silent, I, therefore, doubted her condition,” says the mother.

Sarah recalls that it was around 6 pm on Saturday when she was raped by her cousin brother identified by a single name Calvin—currently wanted by the Police in Arusha in connection with the rape offence.

“I was alone at home that evening. After taking shower, I went to my bedroom to change clothes and suddenly he (Calvin) stepped inside the room and raped me,” says Sarah (in tears).

Sarah who was form one student at Namanga Secondary School (not a real name of the school) further re-counts that she was intimidated by the offender who told her to keep the secret otherwise he would kill her.

Being at that younger age, Sarah had no choice than accepting the order. She, therefore, kept the secret.

“I came to realize that I was pregnant after I missed my period in the next month, but I was scared to tell my mother. I thought she could kill me,” says Sarah.

Her plans to undergo an abortion collapse

Sarah later decided to consult a specialist at a near health facility for abortion service, but the specialist advised her to keep the baby.

“When Sarah came to me, she looked extremely worried and scared. She asked me whether I could help her to abort it, but I advised her to keep the baby alive,” explains the healthcare provider

Sarah’s rapist is a family member sadly initially the girl’s mother wished to resolve the matter without involving other people. But to stand up for the rights of her down and speak out against this violation decide to report the case.

“But I had to report it to Police after the suspect disappeared,” says the mother.

Sarah’s case has been filed at the gender desk at Central Police Station –Arusha for further investigation, according to the mother.

Since childhood, Sarah wanted to become a teacher. “I wish to get back to school after I give birth so that I fulfil my dreams, but my mother won’t afford the tuition fees imposed by the private schools.”

Her chance to resume studies after delivery is impossible following in June 2017, John Magufuli, Tanzania’s president, announced that no pregnant girl would be allowed to study in a state school, nor readmitted after giving birth. This is regardles of the fact that there are many girls like Sarah who have been raped and have fallen pregnant.

“As long as I am president no pregnant student will be allowed to return to school,” he said, reacting to a debate in Parliament. “We cannot allow this immoral behaviour to permeate our primary and secondary schools. After getting pregnant, you are done,” said the President.

In 2015, Tanzania implemented a free education policy for high school, but the president now says that right does not extend to young mothers.

“I would really appreciate if I receive financial aid that will enable me to acquire education at private school after I give birth. I am also looking forward to raising my child just like how my mother raised me,” says Sarah in tears.

Adolescent pregnancy is a worldwide problem. In Sub-Saharan Africa, an increasing number of girls are becoming mothers by the age of 18 years old.

Tanzania as one of the countries in Sub-Saharan Africa, teen pregnancy is a very big problem among adolescent girls.

In 2016, there were 69,000 teen pregnancies in Tanzania, according to government data. About 21 per cent of girls aged 15-19 have given birth, with the figure rising to 45 per cent in some areas of the country.

The child marriage rate is more than 35 per cent nationally, and is at its highest, at 59 per cent, in Shinyanga.

The World Health Organization (WHO) estimates that the risk of death following pregnancy is twice as high for girls aged 15–19 than for women aged 20–24.

The maternal mortality rate can be up to five times higher for girls aged 10–14 than for women aged 20–24. Illegal abortion also holds many risks for teenage girls in areas such as sub-Saharan Africa.

“When a girl becomes pregnant, her life can change. Her education ends and her job prospects diminish. She becomes more vulnerable to poverty. Teen pregnancy burden, therefore, results in a cohort of young girls with little education and limited economic opportunities. It harms not only individual girls and women, but also their families, communities and countries.”

The education expert further appeals to the government to lift its ban on pregnant girls in order to give them a chance to access their fundamental rights to quality education.

“The entire system including the government, schools, community members and have an obligation to equip the teenagers with reproductive health knowledge. It would help in curbing the burden,” says the expert.

He adds: “We need to learn from Zanzibar, Kenya, Uganda where the pregnant girls are allowed to resume studies after giving birth. Even from a biblical perspective, God teaches us to forgive one another as he forgives our sins.”

Adolescents may lack knowledge of or access to, conventional methods of preventing pregnancy, as they may be too embarrassed or frightened to seek such information, says Waziri Njau, the Project Coordinator of The Challenge Initiative Tupange Pamoja project led by Jhpiego in partnership with local government authorities.

The project is funded by the Bill and Melinda Gates Foundation. It serves to scale up the use of modern contraceptive methods among all women aged 15-49 years in urban poor areas in Mwanza, Arusha, Tanga and Dar es Salaam regions.

“In other cases, contraception is used but proves to be inadequate. Inexperienced adolescents may use condoms incorrectly, forget to take oral contraceptives, or fail to use the contraceptives they had previously chosen. Contraceptive failure rates are higher for teenagers, particularly poor ones, than for older users,” says Mr Waziri, the project coordinator.

Under the project, at least six school-based youth clubs have been launched in Arusha aimed at equipping the students with Family Planning (FP) and AYSRH knowledge in efforts to reduce teenage pregnancy in schools.

Monica Shagina, Matron at the Institute of Accountancy Arusha (IAA) acknowledges that teenage pregnancy cases keep increasing at the University, noting that the burden is attributable to lack of reproductive health knowledge among the majority of the students.

“At the University level, the management also plans to introduce special FP and AYSRH programmes to be incorporated into the University’s teaching curriculum with a view to educating the students on the adolescent related issues,”

One of the (TCI) IAA Club’s leaders, Jovis Kalikawe reveals that the club consists of 45 mainly continuing students, saying other 130 new first-year students have been registered to join the club.

“Club members are being recruited to become Ambassadors of FP and AYSRH services at University level. We also distribute condoms to the students in efforts to reduce teenage pregnancies,” says Jovis.

*Not their real names

John Namkwahe is a freelance Journalist reporting for the English newspaper-‘The Citizen’. This story is part of the GL 16 Days SRHR News ServiCE