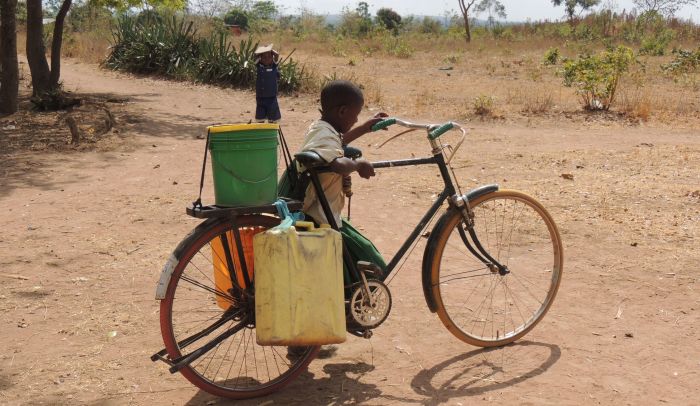 Dar es Salaam, 4 December: Despite her desire to complete her education, Neema Charles never made it to secondary school as she was forced to get married a year before she completed her primary education.

The 16-year old girl from Tarime District in Mara Region of Tanzania dreamt of becoming  a doctor but was barred from completing her primary education in 2016 and forced to get married to 67 year-old man in her village.

“I was in standard six preparing to join standard seven in 2016, but my father told me to stop schooling because he had talks with a man in the village who was to marry me,” she says.

The seriousness of the matter never dawned on her until her father ordered her to stop going to school and begin preparations for the marriage.

“I never wanted to get married but my father pulled me out of school and forced me to remain at home as others attended school,” she narrates

Neema’s academic journey was cut short at the age of 14 and nothing save for a miracle was likely to turn tables in her favor as the father saw nothing wrong with cutting off her education. He was only interested in getting cows.

Recently, UNICEF estimates indicate that approximately 70 million — or around 1 in 3 — young women around the world aged 20-24 were married before age 18, with 23 million of them having been married before they turned 15. Globally, almost 400 million women aged 20-49, or over 40 percent, were married while they were children.

The innocent girl was married off to the Chacha Wangengi…a man close to her grandfather in age just a few days after she stopped attending school.

“My father claimed that he had already been given the dowry and so I had to leave my home and join the old man at his home,” she narrates. Neema became her husband’s third wife.

In her marriage, she suffered humiliation and violence. Soon, the pressure of being a young wife to an old man weighed her down. She fled from the village to Dar es Salaam.

“The pain I endured was too much, I decided to flee to Dar es Salaam,” she notes. In Dar es Salaam, she got married to another man, much younger than the old husband.

Though living in the poverty, Neema says she is happy to be married to the second man rather than the old man who made her to miss her dream to complete her education.

The young woman with two-children is among the thousands of other young girls now serving as wives in many and poor households in Tanzania.

Despite strict policies put in place by the government to ensure every child attends school, the majority of girls, like Neema, are still stuck in the traditional norms that have governed their communities for years. Parents go as far as isolating girls from schools to prepare them for early marriages.

According to the global reports, Tanzania has one of the highest child marriage prevalence rates in the world.

Despite being an awful violation of human rights which robs girls their educational dream, some parents in Tarime value child marriage and will spend time preparing young girls for the role of future wife..

Easter Mwita, an old woman from Tarime District, strongly affirms that marrying off girls as young as 10 to 15 years makes them great wives and strong women to take up the role of motherhood.

“Education takes our girls nowhere and is also very costly for us (parents). It adds no value to our lives. However, if girls are married off, we get dowry.”

According to the traditional woman (Mwita), girls in Tarime are trained to do household chores and handle their marital duties. Girls as young as six are taught about marriage and motherhood so they can become perfect for the role.

“If we educated them early we give them out marriage for high dowry,” she says.

The report on Early Pregnancy, Child Marriage, and their impact on girls’ education in Tanzania by Washington and Lee University School of Law 2015, International Human Rights Practicum December 6, 2015, indicates that some traditional practices are to blame in fostering high rates of child marriages. Such practices include Unyago, a ceremony conducted to usher girls into adulthood practiced by some ethnic groups in Tanzania.

One of the primary purposes of this ceremony is to educate young girls on how to be good wives. Girls learn household chores, such as cooking and cleaning, as well as how to take care of their husbands. Sexual education is also taught during this traditional ceremony.

It is aimed at reinforcing gender roles within families and place women in a subservient position in relation to their husbands. In addition, girls tend to seek husbands immediately after the ceremony.

Zakayo Gati a father in Tarime District says that educating boys is  more valuable as they get jobs to support the family whereas girls just add expenses to the family.

“We teach the girls household chores mainly to prepare them for their future as wives but most importantly to give us dowry when they get married,” he says.

However, experts argue that education is one of the most effective strategies to protect children against marriage. When girls are able to stay in school, an attitudinal change can also occur towards their opportunities within the community.

“Child marriage is an appalling violation of human rights and robs girls of their education, health and long-term prospects. A girl who is married as a child is one whose potential will not be fulfilled. Since many parents and communities also want the very best for their daughters, we must work together and end child marriage,” said Dr. Babatunde Osotimehin, UNFPA Executive Director.

In July 2016, the Constitutional Court ruled that marriage under the age of 18 was illegal, and stated that sections 13 and 17 of the Marriage Act were unconstitutional. This landmark ruling was the result of a petition by Mischana Initiative, a Girls Not Brides member. And the government was given a year to update its laws.

The United Nations supported the adoption of the 2009 Law of the Child, and has since supported the development of regulations in order to address both the causes and the consequences of child marriage.

Working with the Tanzanian government, UNICEF took part in developing state action plans and supported the establishment of girls’ clubs and collectives that were trained on child rights and how to work with the community to stimulate dialogues about ending child marriage.

Tanzania is one among the countries who have adopted the Sustainable Development Goals (SDGs) and committed to ending child marriage by 2030.

Target 5.3 of the sustainable goals, aims to “eliminate all harmful practices, such as child, early and forced marriage”. This is an important tool to drive action, hold governments to account for their commitment to girls, and track progress on ending child marriage globally.

Anne Robi is a journalist from Tanzania. This article is part of the Gender Links 16 Days News Service.

Photo : Young girls are taught chores from an early age in preparation for marriage (by Anne Robi)